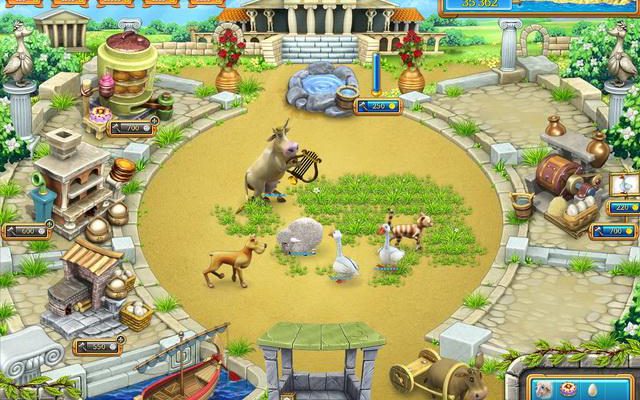 Not content with a staggering five spin-offs, Alawar has decided to release yet another Farm Frenzy 3 game. And yet again, it’s simply more of the same. Farm Frenzy: Ancient Rome rehashes the same formula as the half dozen releases before it except with a new set of levels and a new setting. And it’s not even an interesting setting.

Ancient Rome attempts to tie its story to that of the previous release, Gone Fishing. It seems that one of the helpful dolphins managed to find series heroine Scarlett an ancient book that, coincidentally enough, is about a young girl named Scarlett from ancient Rome who spent much of her life farming away. Sound familiar? Farming, it seems, is in Scarlett’s blood. Which would explain why she does so much of it. The story takes place across several chapters and, as with previous releases, you’ll be treated to short and simple, comic book-style cut-scenes in between levels. 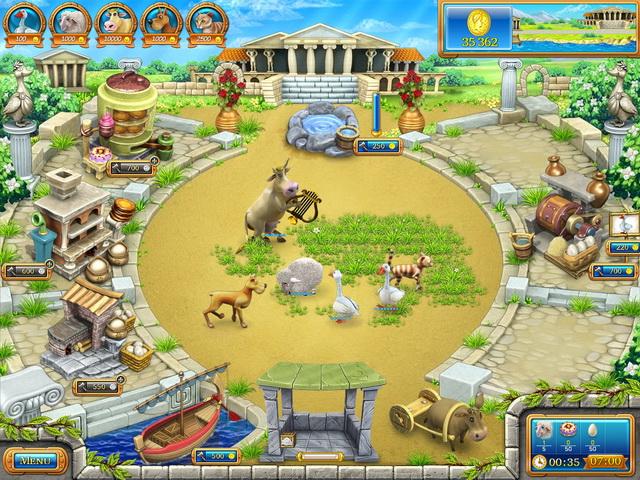 As for gameplay, there really is nothing new here. If you’ve somehow managed to escape the series up until now, it works like this: you get water from a well, use it to plant grass, and animals eat the grass. The animals will create products — geese, for example, lay eggs — and those products can then be further refined to create additional products. Eggs make egg powder, egg powder makes cookies, and cookies make cakes. And so on and so forth. New animals are introduced, you can upgrade your equipment, and there are 90 levels each of which gives you certain tasks to complete within a certain amount of time. You’ll need to earn certain sums of money, collect a certain number of eggs, or bake a certain number of cakes.

Oh, and the bears are back. Only this time they’re wearing horned helmets and wielding clubs. That makes them barbarian bears! And that’s about all the change you can expect from Ancient Rome: aesthetic ones. There is nothing new in terms of actual gameplay. Worse still, the minor aesthetic changes show absolutely no creativity. Most of the animals, and even the machines, are reused from previous games. Apparently cake-making technology hasn’t changed at all since the peak of the Roman Empire.

What makes this all the more frustrating is the existence of a game called Terrfarmers. That game showed that Alawar could make a fresh and interesting Farm Frenzy-style game, and that they could do it well. Yet here we are, with yet another spin-off that barely even pretends to offer anything new. And that’s because it doesn’t. It’s simply a new set of levels with a fresh coat of ancient Roman paint on top of it. 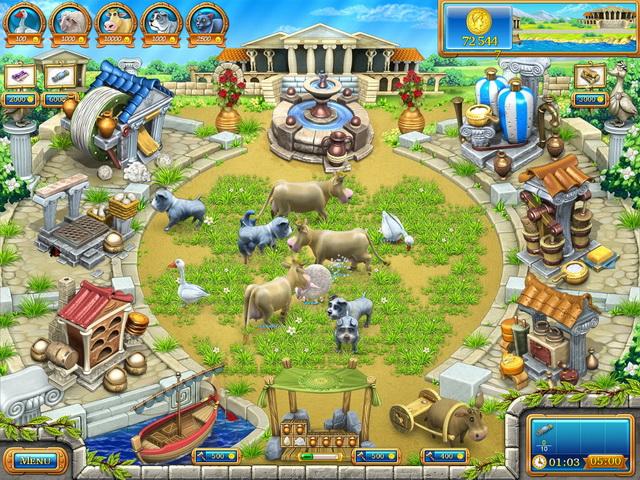 And that new paint isn’t even all that interesting. At least Gone Fishing had a fun and charming aquatic theme. Ancient Rome, in contrast, is pretty dull. It’s simply another field, only this time it’s surrounded by cobblestones and old buildings. The animals are geese and sheep and cats and dogs, all things we’ve seen before. Many times before.

Ancient Rome is for the die-hards. If you’ve played all of the previous games, which amounts to over 500 levels of time management action, this will satiate your need for more. If you somehow have that need. But just know that there’s nothing here you haven’t seen already. It’s the same game, with the same look, and the same structure. And man am I sick of those bears.