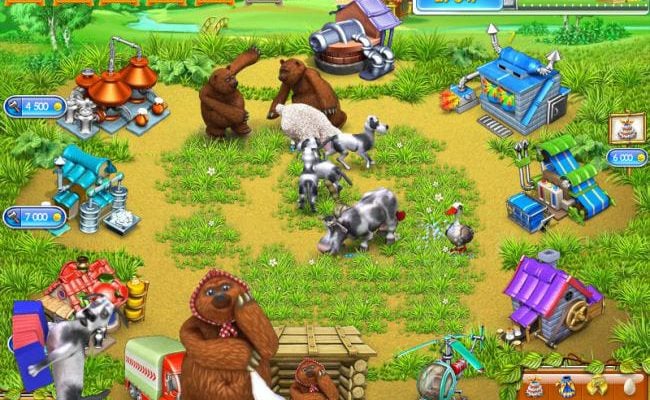 As the third spin-off of Farm Frenzy 3, you’d think that Russian Roulette would bring something new and interesting to the popular time management series. Instead, the game delivers more of the same, with little in the way of surprises, and lacks even the simple visual change made byits predecessor.

After feeding people across the world, in Russian Roulette series heroine Scarlett sets her sights a little higher: outer space. She decides to take on a new account feeding hungry astronauts. As per usual, the story is mostly superfluous, serving only as a set-up for the actual game. What’s disappointing though, is that the new scenario doesn’t really add much to the experience. While the series’ previous release Ice Age played much like the rest of the Farm Frenzy games, it at least added a new and interesting visual style. Russian Roulette doesn’t even have this, instead going back to a traditional farm setting. 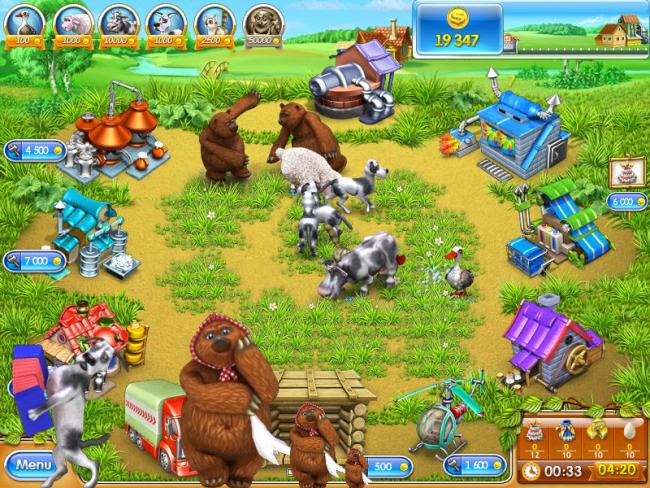 The game looks and plays exactly like the rest of the series. You have a number of different animals that need to be fed, each of which produces a different item. Geese lay eggs, sheep make wool, etc. These items can then either be refined and used to make other items, or sold for profit. Each of the game’s 90 stages gives you a different task to complete, from collecting a specific number of eggs to baking a specific number of cakes. Usually you’ll have more than one objective to complete per stage, and at times it can get pretty hectic trying to juggle them all. You’ll also have to watch out for pesky bears who will scare away all your livestock. Expect to do quite a bit of clicking.

Beating each stage earns you stars, and the quicker you complete it the more you earn. These stars are then used to unlock additional stages. What’s great about this system is that it works no matter how good you are at the game. If you’re constantly getting gold trophies and earning lots of stars, you’ll breeze right through the campaign. If not, you can go back and replay stages to earn the stars you missed out on. This helps ensure that you’ll never really get stuck. 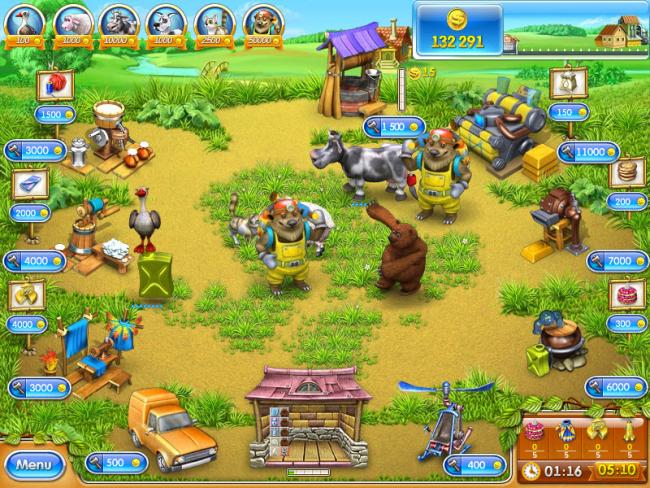 Basically, if you’ve played any of the previous Farm Frenzy 3 games, the set-up will feel intimately familiar. In fact, the only real difference between the games is the goofy new storyline and a few new buildings and products. However, while these look different, they essentially play the same roles as in previous games. There’s even a brand new super unit similar to the robot from American Pie: the oil bear, who drills for oil if you feed it honey. Like the robot, the oil bear is incredibly expensive — costing five times as much as the next highest animal — but produces a very valuable commodity.

Russian Roulette maintains the cheerful, cartoon like visuals the series is known for, with bright and colorful animals that animate smoothly, though the variety of backgrounds on display leaves something to be desired. There’s also an upbeat, catchy soundtrack to match. Overall, the presentation is great, though it doesn’t really do much that you haven’t seen in the series already. The only real annoyance is some of the sound effects, which repeat a little too often: hearing one goose quack is OK, but 30 at once is more than a tad irritating.

But while you’ve already seen most of it before, there is quite a bit of content in the game. The 90 levels provide hours of gaming time, and that’s even if you don’t have to replay any of them (which you probably will). On top of that, because the game is time-based, there’s plenty of incentive to back and replay levels in order to try and improve on your scores.
Russian Roulette is now the fourth game to bear the Farm Frenzy 3 name, and it does little to differentiate itself from the rest of the series. If you’ve already played the previous three games and are aching for some more levels to play, Russian Roulette will provide exactly what you’re looking for, with a lengthy campaign and very familiar gameplay. But if you’re looking for something different, you’ll be sorely disappointed. Let’s just hope that Scarlett is able to take a nice long vacation after this latest adventure, as the Farm Frenzy 3 formula is starting to wear thin.