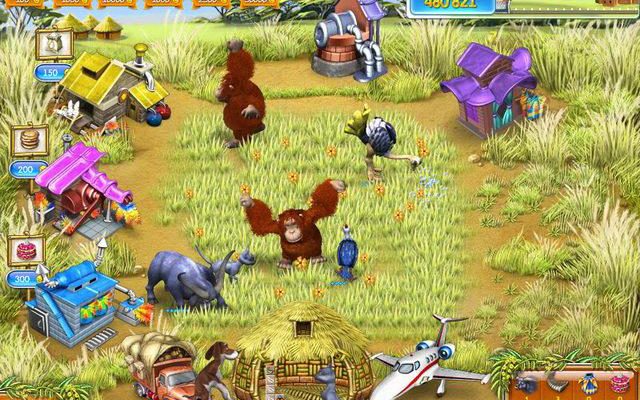 The setting is different, but the gameplay is all too familiar.

Farm Frenzy 3 has finally outworn its welcome. After four spin-offs, it seems pretty clear that the developers have run out of ideas. Farm Frenzy 3: Madagascar brings little new to the table, and plays almost identically to every other game in the series. In fact, aside from a few visual differences, you’d be hard pressed to tell the difference between Madagascar and its predecessor, Russian Roulette.

It seems that series star Scarlett’s previous adventures have left her drained and in need of a vacation, so she decides to go on a self-guided tour of Madagascar. Unfortunately, since she doesn’t have a tour guide, it’s not long before Scarlett finds herself lost. She stumbles across an animal reserve, but finds even more bad news, as all of the animals are sick. Using her farming skills Scarlett decides to help out the reserve by raising as much money as she can. 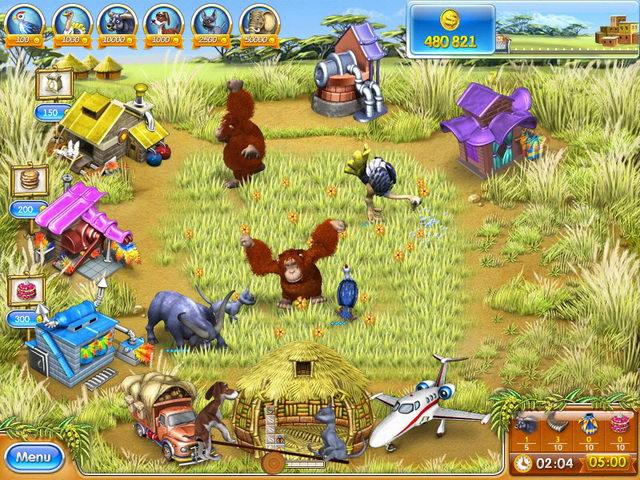 The story is about the only place you’ll find much new in the game. And like the rest of the series, is largely unimportant. Aside from the introduction and the occasional cut-scene — which consist of comic book-style panels featuring wildly inconsistent art — you’ll hardly ever actually interact with the narrative. Instead, it serves as a goofy set-up loosely tying together the events of the game.

If you’ve played any of the previous Farm Frenzy 3 games, Madagascar will feel very familiar. In fact, it will feel pretty much identical. You’ll play through a number of different stages, each of which has a particular goal to accomplish. Levels will require you to do things like earn a certain amount of money or collect a certain amount of eggs, all within a certain period of time. Each stage has two time goals, gold and silver, which will earn you a certain number of stars. You can then use the stars earned to unlock new stages and all of the money you earn can be invested in new buildings.

Aside from a few new additions, you’ll once again be using the same buildings as in previous games. There’s an incubator for hatching eggs, bakeries for making cookies and cakes, and more. There are new animals as well, but really, they’re only cosmetically different. The Guinea birds are exactly the same as chickens, hatching eggs and eating grass, while the ostriches provide feathers in the same way sheep used to provide wool. And instead of a bear storming into your farm and scaring away your animals, it’s an orangutan. There’s even another super-animal, similar to the oil bear from Russian Roulette, except this time it’s an elephant that mines diamonds. But though they may look different, the animals in the game play the exact same roles as before. 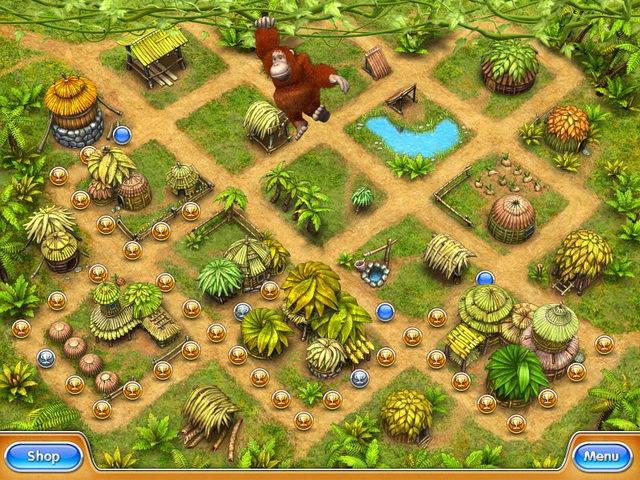 It’s even difficult to see much in the way of visual changes in the game. While some of the animals look different and there are a few new buildings, the actual stages look identical to the previous game. You really need to look closely to spot the differences, which amount to little more than a few different plants and some color changes. Even though the game is set in Madagascar, it doesn’t really feel like you’re on an isolated island teeming with wildlife. It just feels like you’re on a farm. Again.

Really, at this point you already know if you want to play Farm Frenzy 3: Madagascar. If the previous four games didn’t satiate your appetite for collecting eggs and baking cakes, Madagascar offers up more of the same. The levels are as challenging as ever, and feature a nice difficulty curve, starting out simple before slowly ramping up the difficulty. And there’s lots of them, with a total of 90 different stages to take on and an unlockable endless mode as well. But if you’re waiting for the series to finally do something new, Madagascar will leave you very disappointed.

Secrets of the Dragon Wheel Review