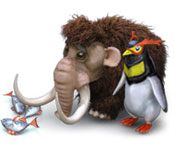 Whether you prefer the sunny beaches of Tropical Farm, or the icy landscapes of Farm Frenzy: Ice Age, one thing is certain –  farming fans have no shortage of time management games to choose from. Farm Frenzy 3: Ice Age is the third frantic game with the title "Farm Frenzy 3" to be released by Alawar in recent months, and it delivers much of what you’d expect from the series.

The original Farm Frenzy 3 had you traveling across the globe, while Farm Frenzy 3: American Pie had you farming in the USA with robots. You may be wondering to yourself, "Why is each game is being called Farm Frenzy 3 instead of Farm Frenzy 4 or 5?" The answer becomes apparent if you’ve played more than one game in the series. Each Farm Frenzy 3 game is a variant of the original, with the same game play mechanics and feel, yet a slightly different theme.

As you might have guessed by the name, Farm Frenzy: Ice Age follows Scarlet as she runs a frosty farm way up in the North Pole. There’s a surprise guest, but his jolly identity should be a no-brainer given the location. Like always, the story is light and doesn’t offer much in the way of details or explanations.

The game play follows the same familiar format as the other Farm Frenzy 3 games. You need to keep your well full in order to provide food for your animals to stay alive. Animals drop produce, like eggs and feathers, and these can be gathered and sold.

The graphics have undergone a complete overhaul to fit with the chilly theme, so you farm over a frozen pond instead of a green pasture. All of the animals are animated, so it’s fun to watch them waddle around the screen eating fish and amusing themselves. Since everything is Arctic-themed, you get to raise penguins, royal (colorful) penguins, walruses, and wooly mammoth.  As usual, you can also buy cats to help gather produce, and dogs to chase away predators. Dogs don’t explode in this version, by the way…they just roll off the screen.

Polar bears pose a problem and will randomly attack and steal your livestock, but these can be captured with rapid mouse clicks and then sold for a profit. They can even be dressed up in funny snowsuits for extra cash later in the game. For another cute surprise, pause your game and leave it running for a while, and see what happens.

You can use produce you’ve gathered to produce processed goods like cookies and cakes once you’ve bought the right upgrades, and additional goodies can be paid for and airlifted into the playing field to help you meet your targets. Most of these processed goods are the same as in Farm Frenzy 3, and include cookies, cakes, fancy feathers, clothing, and of course ice cream.

Your goals vary by level, and you earn a higher score for beating levels faster. Everything is done with the click of your mouse, so as you’d expect, it can get quite frantic as you advance. The fast pace and quick multitasking is part of the big draw in Farm Frenzy 3, and I’m happy to report that Farm Frenzy: Ice Age is just as hectic as its predecessors, while being less complicated and more user friendly than Farm Frenzy: Pizza Party.

Just like the other Farm Frenzy 3 titles, Ice Age has virtually endless replay value. You can aim for a challenging silver or gold score on each level, and replay levels as much as you’d like, plus there’s an endless mode for those who can’t get enough. Even if you play straight through without repeating anything, you’ll get at least a dozen hours of game play.

On the downside, even with a new theme, it’s still much the same as Farm Frenzy 3 and Farm Frenzy 3: American Pie. The graphics offer a bigger difference than what you’d find when comparing the earlier two, but the game play itself is otherwise nearly identical.