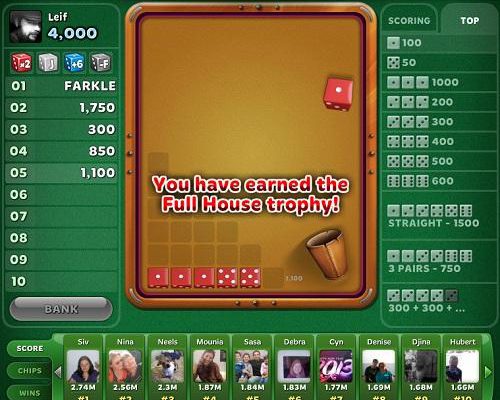 Is it possible for old favorites on Facebook to make a comeback? The makers of Farkle Blitz sure seem to hope so, as they’ve taken the dice game formula that launched a thousand likes back in 2009 and repackaged it for contemporary casual play. Or have they?

Despite the timely “blitz” moniker, there’s very little to distinguish this latest outing from the popular Farkle app that’s already available–certainly nothing like the one-minute matches that define blitz games–and the little faults of its design leave visitors trapped with an inferior product. 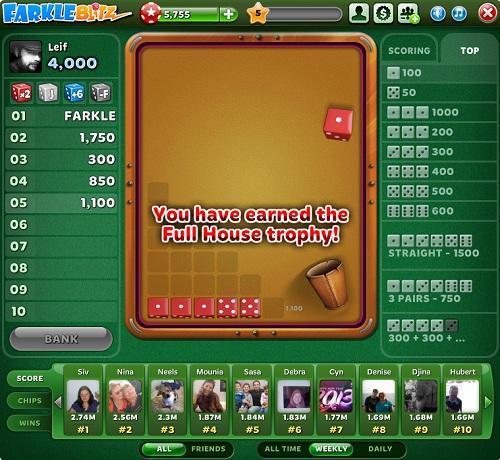 “If you missed the Farkle craze the first time around, never fear, the rules are as simple as they were in yesteryear. Each game starts with a roll of six dice, and you roll the dice up to six times each turn, taking out at least one dice and aiming to score at least 300 points before you can “bank” your winnings. The challenge lies in the fact that there’s only a handful of scoring combos (chiefly hinging on rolling three of a kind or scoring a straight), and ones and fives, scored at 100 and 50 points respectively, are the only single dice rolls that count. If you fail to make any of these combinations, you “farkle”–that is, you fail. The score adds up over the course of 10 rounds, and at the end, the player with the highest overall score wins.

That’s more or less how Farkle‘s always worked, both in real life and on Facebook, but Farkle Blitz attempts to achieve a greater focus on tiered play by including several different tables with vaguely Vegas-y themes and increasing antes. The 10,000 chip ante’s currently the hip kid in town,  but if you’re in the mood to roleplay a Wall Streeter circa 2005, you can throw your cash away via 10 million chip whopper available at level 20. (That’s roughly 50 bucks’ worth of premium currency.) As with previous versions of Farkle, though, it’s just as fun to play against yourself in the forgiving practice mode and in the tougher risk mode that allows you to set both the score cap and the multiplier for chips if you win. 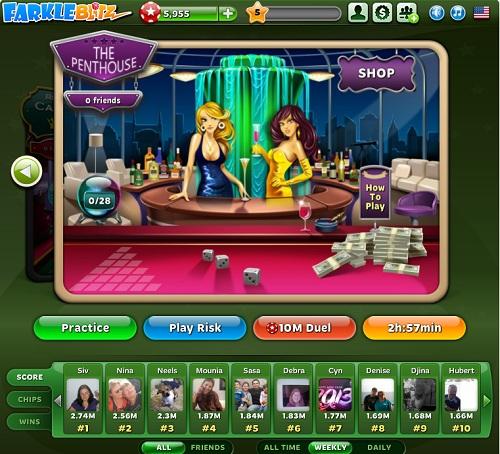 Too bad the dice in Farkle Blitz seemed stacked against you. Farkles mar the experience here more so than in the old Farkle Facebook app, to the point that it’s not too uncommon to net up to five farkles in a row on the very first roll. It occurs frequently enough that it even outpaced my results when I tried the game in real life for kicks. On the risk mode, particularly when you’re aiming for a score of 7,000, that can be disastrous.

That might be written off to chance were it not for the fact that playing Farkle Blitz is a pain on any browser other than Chrome, as Firefox and Internet Explorer both play host to an overwhelming succession of crashes and lockups. On rare occasions (presumably on all versions), your winnings don’t even show up after you’ve won a duel against another player.  And even though I’ve never encountered this problem myself, an alarmingly high percentage of players insist that they’ve lost chips that they’ve bought without ever getting a chance to use them.

If you’re not throwing cash down, though, it’s a decent enough game, but perhaps not so much to take a vacation from the original Farkle.  But even then, other factors might rub you the wrong way. Right now, it appears that the only point to adding friends is to have a more convenient way to ask them to play with you, and the traditional social standbys of sending and receiving items are missing in action. While you might like the themes for each of the unlockable tables, you’re less likely to enjoy the music, which sounds like nothing so much as cheap 1980s elevator fare.

Quibbles like these stack up and hurt the whole experience, but nothing about Farkle Blitz is so disappointing as the absence of any real attempt to use the blitz concept beyond its name.