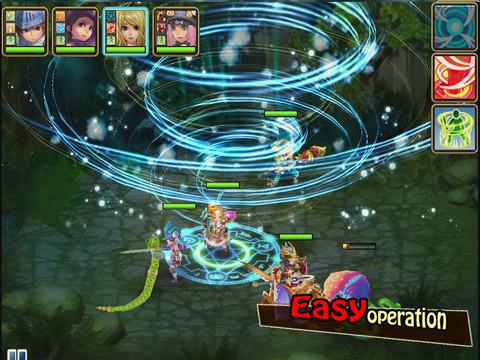 “Fantasy Adventure.” Because who needs a title that can easily be found within most search engines?

A quick wit and a sound sense of strategy will be essential for anyone looking to fight their way through Fantasy Adventure‘s 60 levels. It’s a long and rough road, but one well worth travelling for genre fans. There’s just one thing that confuses me: how in the heck is this a free-to-play game?

Good and Evil had a bit of a tiff many centuries ago, and while Good came out on top it was only a matter of time until Evil tried that funny business again. Before things started going downhill once more, a powerful sage began to awaken the Mageborn: powerful magical warriors who could be a tremendous boon in the inevitable showdown. Unfortunately the poor guy lost a couple marbles along the way and has since gone loopy. Plus he wants to destroy the world now, naturally. Players assume control over a pair of fledgling warriors as they attempt to fight the good fight and (hopefully) prevent all that eternal darkness and damnation stuff.

Each of Fantasy Adventure‘s multiple stages requires careful unit and unit skill management. Roland the knight is a great meatshield; he can pull aggro easily and close distances quickly in order to keep enemies occupied. Charlotte the cleric won’t do any damage but her healing skills are what keeps the team going (and alive in general). Alphonse the mage can’t take a hit but packs an immense magical wallop, and so on. Each character can be selected and moved around the screen with a few taps, swipes, or a combination of both. Each of the eventual 13 characters also has unique Active skills – which can range from plowing through lines of enemies to healing the entire group – as well as a number of passive abilities that boost a number of stats, decrease cooldown times, and so on. Better equipment can be found during play as well as purchased or even upgraded (5+ levels and it changes into new gear) in the shop between levels. Skills can also be upgraded, of course.

I was surprised to find that all of the colourful visuals (save the backdrops) in the game are actually 3D. They look pretty nice on my phone’s smaller screen and the character animations are very well done. Fantasy Adventure is a pretty good-looking game, all things considered. It’s also a game that’s loaded with content and incentive to play. Each of the 60 levels can be replayed to earn more experience and cash, more and more gear can be purchased or upgraded, there are plenty of individual character skills to unlock and improve, and over a dozen characters to acquire. With a party limit of four that means there are a ton of possible character/skill combination possibilities, to say nothing of just how much time someone would have to invest in order to unlock and max out everything.

In all honesty I’m dumbfounded as to how this is a freemium game. Absolutely nothing about it screams “free-to-play.” Money is distributed fairly, there’s no special limited currency, no play restrictions, no level packs to buy, and no ads. You can fork out real money for gold, although the gold flows freely enough that it never feels necessary. I’ve got no complaints about getting my hands on a quality iOS game for borderline free, but I worry that it might prevent USERJOY from making any sort of profit.

Aside from my utter confusion about not having to pay for such a robust game, my only other problems stem from the interface. Anyone who’s played other real-time “line” strategy games will be familiar with most of it. Sometimes a tap won’t register and the cleric will end up getting directed straight into a giant mob of enemies. Other times an attack command will be misconstrued as a movement command. By and large these issues aren’t game-breaking and typically only result in a unit taking a bit of damage until Roland can get everyone’s attention again – but it’s still a problem sometimes. Although I have to give USERJOY credit for adding little heal icons under each character’s portrait when Charlotte is selected. It makes healing the right target much less stressful. 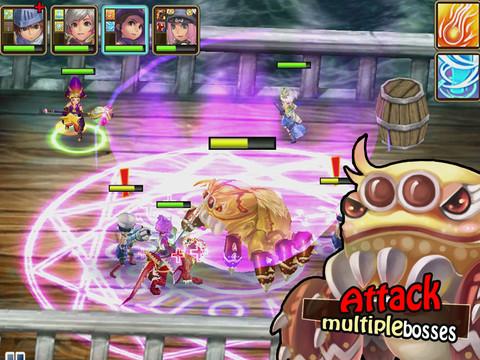 Fantasy Adventure is a fun, quality game. The little control quirks aren’t anything new for games in the genre and never become so much of an issue that they ruin the experience, and there’s more than enough content to keep folks busy for a while. It’s a shame that it’s kind of obnoxious to search for, though.