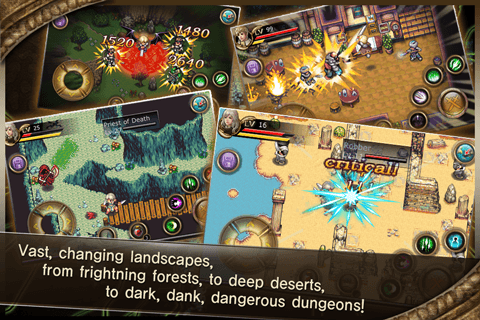 Gather round, children, and I will tell you the story of Fantastic Knight. It’s a tale full of reckless knights, noble rogues, oppression, rebellion, and the end of an empire. Oh, and it’s also an iPhone RPG that’s a total blast.

The story takes place in the fantasy kingdom of Beollent, which has seen better years. When the game starts, the government (which is already divided from within) finds itself facing attacks from rebels. The plot is told from two different viewpoints: Wenrick, the young man who’s set to inherit the imperial throne (who’s hated by his fellow aristocrats, but loved by the soldiers he leads), and Erien, a rogue who learns she’s pre-destined to save the world and abolish the old empire. Eventually, the two characters’ paths cross, and… well, I’m not going to lie: the story is fairly standard epic fantasy stuff, but it’s surprisingly well-written and fun to watch unfold.

The gameplay is a pretty blatant clone of SNES-era RPGs, with a lot of exploration and button-mashing combat. There’s a virtual D-pad and attack button, as well as some other buttons that can be customized to use items and skills. Movement is a little stiff, since characters can’t travel diagonally, but the combat is fast-paced and enjoyable (thanks to an auto-aiming system that works nicely when engaged with multiple enemies).

Fighting is also refreshingly different, based on which character players are controlling. Wenrick is a soldier who uses heavy sword blows to beat his foes around. Erien, in turn, is weaker, but her dual-knife attacks (which can poison enemies) are much faster than her co-star’s.

Now, the one big issue that became quickly apparent was that the game doesn’t actually feature an auto-save feature. Saving games requires a quick push of a button, but it’s easy to forget to do this thanks to the frantic combat that appears in the game.

Fantastic Knight does a lot of things really well, but the two areas where it truly stands out are its user interface and its production values. 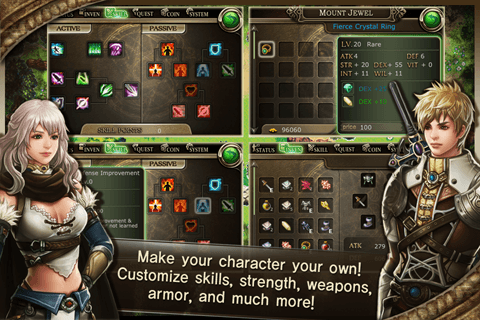 As opposed to many other RPGs on the iPhone, the game’s on-screen controls are wonderfully laid-out. Not only that, but the various buttons are reasonably-sized, which means that players don’t have to fight with the game in order to successfully use an item or unleash a special attack.

The music and graphics top notch, especially the latter. The overall look is presented with top-down, retro graphics, which is fairly common in a lot of iOS RPGs. However there’s so much polish and detail with the visuals that they really are quite stunning. On top of that, the game’s menus feature some really lovely designs and are easy to navigate.

Fantastic Knight is one of those action RPGs that doesn’t do anything terribly original, but what it does do, it does well. Honestly, that’s fine. The high level of polish makes the game stand out from its competition, and it’s got a ton of replay value thanks to the two characters’ different perspectives. If you’re an action RPG fan, you shouldn’t pass this app up.