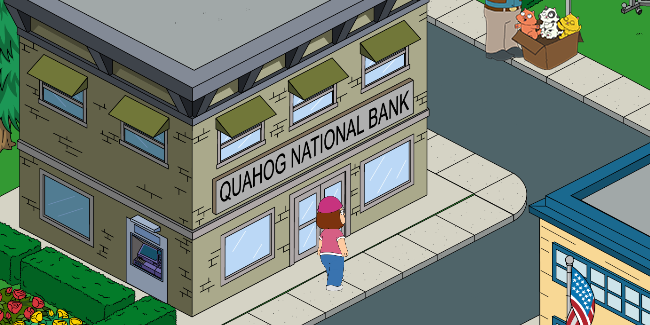 Simpsons did it (better)

The Simpsons: Tapped Out was released for iOS in the first quarter of spring 2012, and later on Android in 2013. Not only has the Springfield-themed city-building game remained a consistently popular download since its launch dates, but it’s also one of the top-monetizing free games on the App Store and Google Play.

So it’s not at all surprising that TinyCo looked over in EA’s direction and said, “Say – look at what they’re doing!” before taking pictures and frantically scribbling on a pad of paper. What is surprising is that it’s taken this long for a Simpsons-style mobile game to get wrapped up in a Family Guy skin and slapped on the digital market.

Sadly, the wait hasn’t been worth it. With its aggressive panhandling for in-app purchases, long wait times, and (mostly) flat jokes, playing Family Guy: The Quest for Stuff is as sad as watching Rupert the teddy bear grow soggy in a torrential rainstorm.

The Quest for Stuff begins after Peter Griffin destroys the town of Quahog during a particularly apocalyptic fight with his nemesis, Ernie the Chicken. Peter must rebuild the humble suburb from the ground-up and reinstate its population.

If the premise for The Quest for Stuff sounds exactly like Tapped Out‘s setup, that’s because it is (minus the giant chicken). There isn’t a whole lot of difference between how the two games play, either. Restored buildings and houses generate coins every hour or so. Re-homed inhabitants can perform jobs / tasks relating to their personalities (Chris Griffin can “eat a whole ham,” Peter can “perform an ethnic handshake” with Jerome from The Drunken Clam, Quagmire can “Giggity Strut,” and so on). 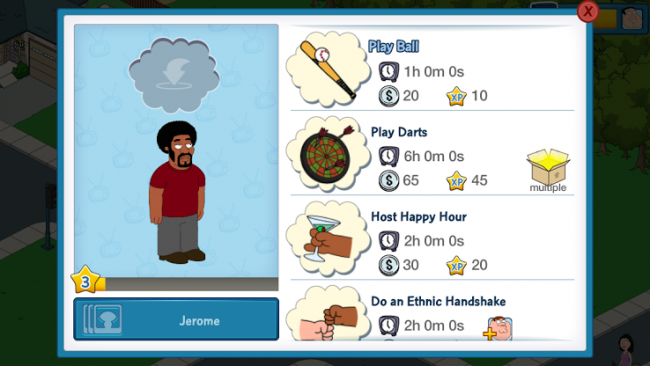 There are decorations galore, too. You can park the Hinenpeter on the front lawn, launch the Petercopter, or even lay claim to your very own Crippletron.

Quahog’s most famous landmarks and accessories must be bought using premium currency – in this case, “clams.” Fair enough, except the game elbows you constantly about buying more clams, going as far as to put it in your quest task menu.

Character tasks take hours to complete and yield comparatively paltry sums of money. In other words, even performing seemingly simple tasks like restoring buildings requires a heap of patience, especially since you’re only provided with one “undocumented worker” and must dish out 50 clams ($1.99 USD) for another. By contrast, Tapped Out works because players can enjoy the overwhelming majority of the game without feeling pressured to pay up. 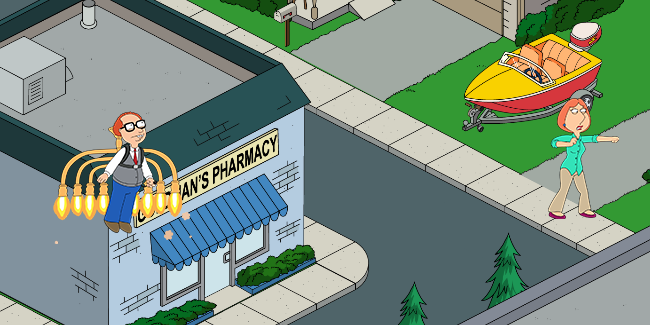 Speaking of the aforementioned undocumented worker, his presence more or less sets the tone for The Quest for Stuff‘s sense of humor. Most of the game’s laughs amount to, “Ha ha, a Mexican guy is working for you,” or “Mort is cheap because he’s Jewish,” or “Jerome does wacky black guy stuff.” Family Guy has never been a sensitive show, but it can still deliver laughs (Peter ordering 6000 chicken fajitas will never not be funny). The Quest for Stuff barely presents an opportunity for a smile, though series veterans will at least appreciate the appearance of Wacky Waving Inflatable Arm-Flailing Tube Man and other B-listers.

Family Guy: The Quest for Stuffapes The Simpsons: Tapped Out without quite understanding why the latter has remained a hit. Some Family Guy fans may consider a temporary move to Quahog, but chances are good they’ll go back home to Springfield before long.