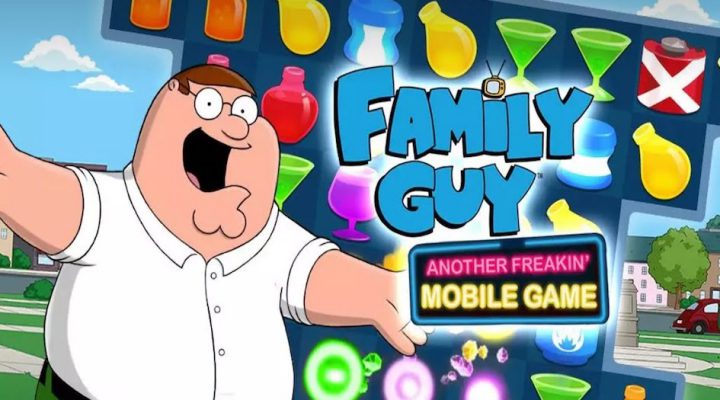 Keen to make you spend money

In the mood for another formulaic match-3 puzzle game? If you’re saying yes for some unusual reason, you’ll be very pleased with Family Guy- Another Freakin’ Mobile Game. You should also consider setting your expectations a little higher. Ok, so Family Guy- Another Freakin’ Mobile Game isn’t terrible by any means, but it’s also not particularly great. While Futurama: Game of Drones demonstrated that a match-3 game with some great fan service works, Family Guy’s latest offering runs head first in the opposite direction. 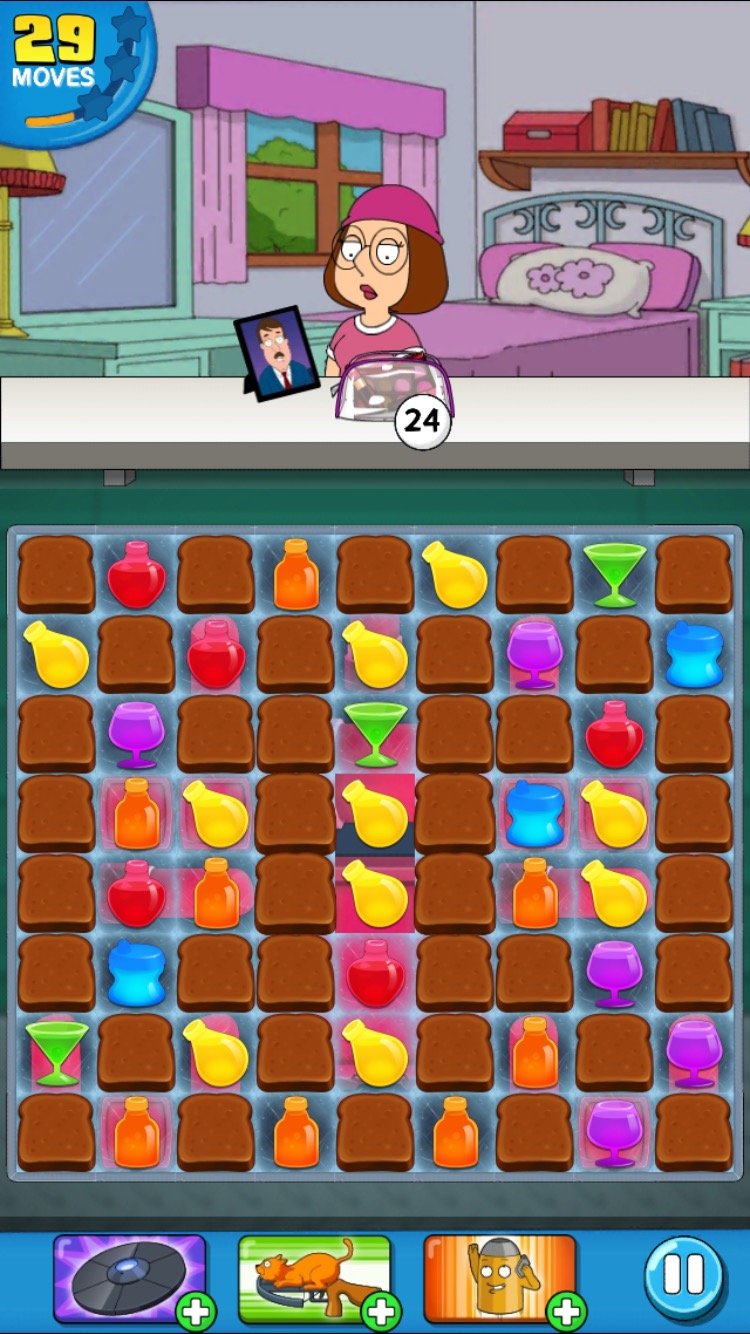 A lot of that is because Family Guy- Another Freakin’ Mobile Game lacks imagination. Its storyline focuses on Peter Griffin selling alcohol to people while he drives around the local area. There was some fun to be had with Futurama’s tale, but you’re almost certainly going to be skipping the storyline here. Who plays a match-3 game for the storyline, though? As long as it’s fun to play, right?

And it kind of is fun if you’re a big match-3 fan, even though you’ve played all the game types before. Desperate to have an edgy take on things, you’re matching drinks rather than gems here. Some levels have you trying to collect many of the same type in order to serve drinks to other characters from the show. To be even more ‘adult’, another game mode has you collecting condoms for Quagmire so he doesn’t have any more children. This is akin to match-3 levels that have you changing the color of tiles underneath the gems, so it’s a mode you’ll have played many times before. 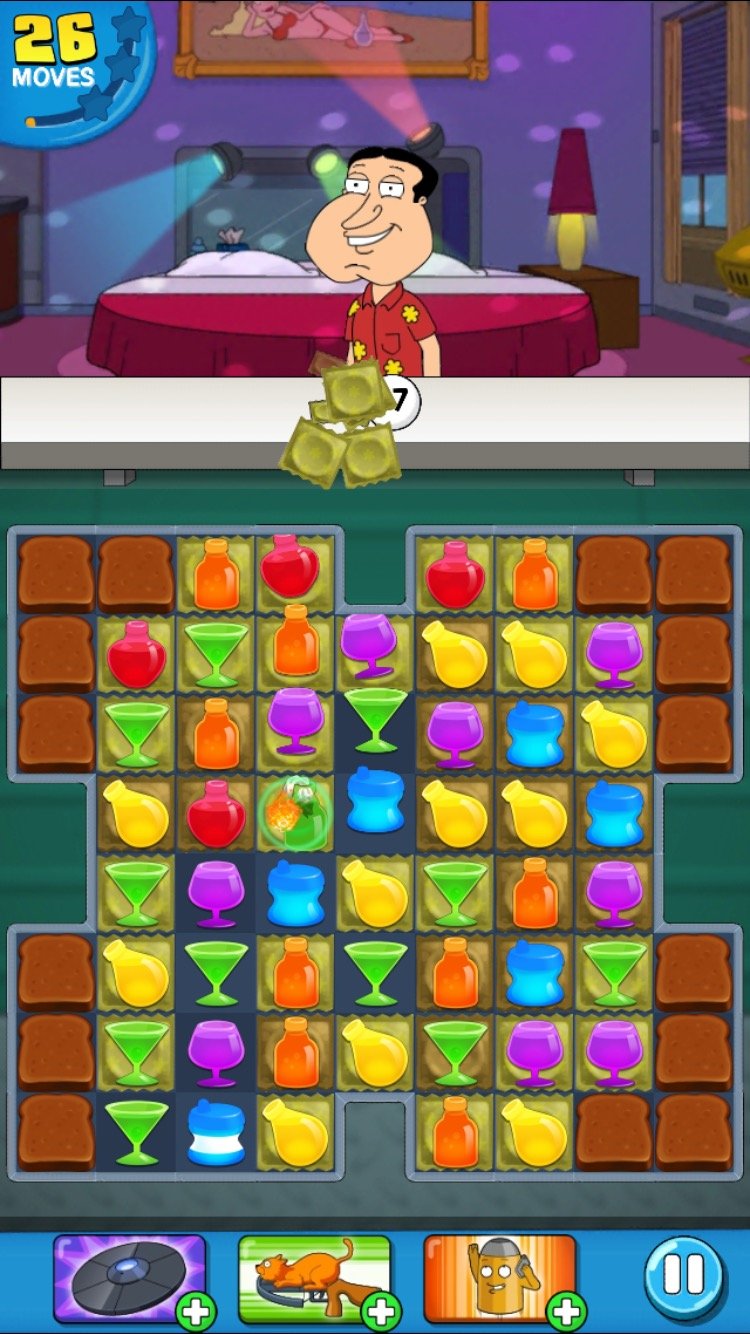 Elsewhere is the borderline offensive premise of Meg uncovering make-up so she’ll look attractive. Offensiveness aside, it’s a formulaic path. You’re just clearing certain areas of the screen again. There are boss battles too where you fight Peter’s arch-enemy, the Giant Chicken. They’re simple enough to figure out. You make matches, turning tiles blue and inflicting some damage. It’s all fine, but nothing overly special.

In that way, Family Guy- Another Freakin’ Mobile Game lives perfectly up to its name. It’s almost as if it’s deliberately aiming for mediocrity to make some kind of point about its genre.

There are also issues with difficulty spikes. Early on, each level is pretty easy to complete. Soon though, you’ll realize that power-ups play an important role. Of course, those power-ups cost coins and coins are hard to come by. Throw in a lives based system and it’s clear that Family Guy- Another Freakin’ Mobile Game is keen to get some money out of you.

That would be fine if this was a fun experience, but it’s all so lacklustre. It tries so hard to be funny that it fails on most counts. Power-ups might be called things like a Kitty Crossbow, but it’s all a bit childish and not funny. Sure, some would say that about the show, but as a casual fan of it, I just found this game to be scraping the barrel.

You might find some satisfaction in the collectibles you can earn, unlocking character costumes and new parts of the storyline — but I doubt it. Instead, you’ll hurry back to Futurama: Game of Drones and enjoy the great fan service there. Or, if you’re not too interested in a storyline, it’s not exactly like there’s a shortage of Match-3 puzzle games on the App Store. Family Guy- Another Freakin’ Mobile Game is just a little too eager to live up to its name.