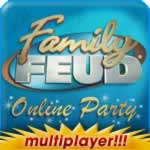 Ah those two little words are heard throughout millions of living rooms as the Family Feud television game show has become a time-tested American institution – beginning, of course, with the boozy kisses from Richard Dawson in the mid-70s!

C’mon, you know the game: one family of five is pitted against another, as they try to guess what 100 people said when asked a survey question, such as “Name something you put on your cereal” or “Name a pet you wouldn’t take for a walk.” The top answers are hidden on the board; if a contestant guesses one of them, it flips around to reveal the answer and how many points its worth. Wrong answers net a big red X on the board; if one family gets three strikes, the opposing team has a chance to steal all the points. Whichever family receives the most points at the end of the round wins.

A personal favorite, the “Fast Money” round takes place after the main game. This is where two out of the five family members try to answer five consecutive rapid-fire questions – and the goal is to guess the most popular answer to win as many points as possible.

Following the success of iWin’s Family Feud computer game comes its multiplayer-only version, Family Feud Online Party. Thanks to the Internet, you can now play with and against other players anywhere in the world.

After an account name and password is chosen, gamers are dropped into a lobby where they can choose to play one of two game types: a straight-forward head-to-head mode, where players vie for high-score by guessing what surveyed Americans answered when asked a question. While it feels like you’re alone here, your score will be immediately compared to other live players who are answering the very same questions. The second type of game is a family vs. family mode, just like the TV show, so you can join with real family members or join a generic team to challenge others. With the latter, you can choose to play the game, pass to another family member or steal the points from the opposing team.

The game offers more than 5,000 survey questions from the show, and to keep things fresh, new ones are added twice a week.

Finding a game isn’t a problem – simply click to join a room filled with players. The room name, number of players and whether chat is offered or not will all be seen from the main lobby screen. Keep in mind, though, some rooms may be locked to prevent new players to join (and you, too, have this option while playing).

This online game plays just like the television show as you type in an answer to see if it was popular enough to make it to the board. The game is also forgiving in case of a spelling mistake or typo (e.g. I once typed “despoit” instead of “deposit” and it still was accepted) and it will also give you the answer if it’s close or a synonym, such as guessing “gerbil” and the answer is “hamster,” or typing in “stove” instead of “oven.” You get the idea.

To capture the authentic feel of the TV show, Family Feud Online Party’s graphics, theme music, sound effects and host voice all resembles its television counterpart. It should be mentioned you don’t actually see a host such as Dawson, the late Ray Combs, Louie Anderson, Richard Karn or the current host, John O’Hurley – but the host’s voice is energetic and entertaining. When revealing the answers after a head-to-head game, he’ll say things like “Too easy! You all got that one!” or “Who came up with that one? No one!.” If you get antsy waiting for other contestants to guess the answers, you may hear the host say “They’re almost done!”

After you play for a while, your overall score will increase, and you’ll be able to see how you fare at this game compared to others. You can also win awards, add info about yourself to your profile, choose a different avatar to represent you, and of course, make friends to meet up in cyberspace for a quick game.

Despite some minor issues such as occasional lag when searching for and joining games, and the fact you can’t play against the computer to practice, iWin has done an excellent job with Family Feud Online Party. Not only does it make players feel like they’re part of the show but the head-to-head multiplayer angle keeps the game fun, challenging and unpredictable.