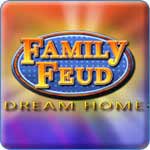 Alright game show groupies – how many of you play along at home and yell at the TV? Family Feud has been on the air since 1976, and was the first U.S. game show to air 10 times a week in its heyday. Family Feud Dream Home tries to bring this game show classic to our home computers, “and the survey says” its good news.

You can play in solo (single player) mode, or in team mode against your friends and family. If you’ve ever watched the show, you already know the rules. For each question, 100 people were surveyed, and their answers were recorded. Some answers are obvious, and some are just plain silly. The object is not to answer correctly, but rather to answer the way you think other people would. You are given twenty seconds to answer each turn, so go with your gut response.

Answering correctly gives you points. You receive a strike each time you don’t guess correctly, and three strikes mean the round is over. If you’re really stumped, you can click the “no answer” button, but this counts as a strike so you might as well guess. In team play, you can “steal” your opponent’s earnings by correctly guessing an answer she missed. Each round is worth more than the one before, so it’s still anyone’s game until the end.

If you beat the average score in solo mode, or beat your opponent in team play, you then move onto the Fast Money round. You get two chances to answer each question asked, with the goal of obtaining 200 points. If you win, you get a big bonus to spend, but even if you lose you’ll still get some money to walk away with.

What sets this Family Feud apart from other versions is the “Dream Home” portion of the title. With the money you earn playing Family Feud, you can buy an assortment of home decor items and snazz up your fictional house. The house itself consists of a family room, dining room, kitchen, bedroom, and kids’ room. To these, you can add couches, tables, lamps, rugs, blinds, and a few accessories, making up a total of 150 items to choose from.

As much as I enjoy interior decorating, it doesn’t really have anything to do with playing the Feud. In fact, there doesn’t seem to be any integration between the two whatsoever. There isn’t much motivation to spruce the place up unless you enjoy doing it for its own sake. Also, you can’t manipulate where objects go in the rooms, so you can’t get as creative as you might like. Still, it’s a cute and creative touch, and does give you a bit of a break between games.

The meat and potatoes of Family Feud Dream Home is the questions. There are over 3,000, which means replay value is very high. And, because the game rounds are so short (less than ten minutes each), it’s great to play in spurts. The questions do a good job of being non-culturally specific, so everybody should be able to participate. Also, the questions are not connected to pop culture, so the game won’t be outdated of you play it a year from now, and teenagers can easily play against Grans.

While the questions themselves are fun and interesting, the game lexicon does appear to be a bit narrow. For example, when asked to name something parents might criticize you over, I got a big red X for writing “children,” but was later surprised to see a top answer was “kids”. The same happened when asked “what you might look for in a spouse and car” – I struck out with “attractive”, but later found “good looks” listed as the best answer. On occasion, the reverse also happens. When asked “how do you tell someone isn’t listening to you,” I wrote “tapping foot” and scored… except the answer revealed was “falling asleep.” Not quite the same thing.

The voice acting is amusing, and the whole game has this pervasive “happy” feel to it. You’re constantly encouraged to keep trying, and you never really feel like you’ve lost even when you have. It’s worth noting that the voice of the host sounds eerily like the late Ray Combs, the original host of television game show. Family Feud Dream Homereally wins when it comes to easy and entertaining game play, though it could do with a better in-game thesaurus. As for home decor, eh… take it or leave it.