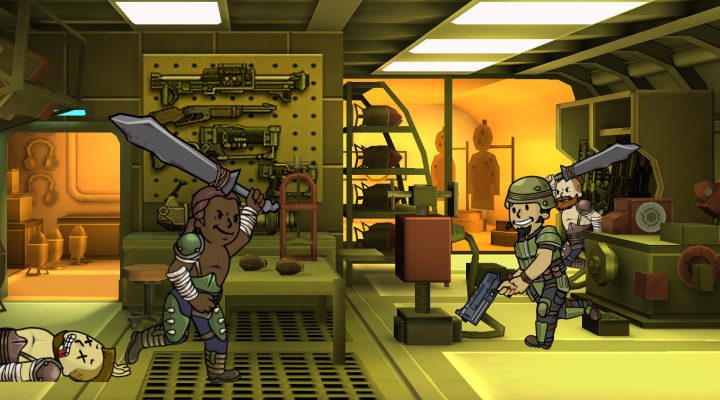 Faithful to the Fallout series

Can look a bit too small on older iPhones

Fallout Shelter was one of the biggest surprises of Bethesda’s E3 showcase. Not only is it a mobile game that no one had heard a peep about, but it was immediately available after the show. This is to memory the first time something like this has been done and Bethesda’s gamble has paid off. Fallout Shelter has quickly risen to be the number one free app on the Apple App Store charts and it’s being talked about the world over.

For those unfamiliar to the Fallout series, in the near future on an Earth in which styles and trends never really left the ’50s, an atomic holocaust has engulfed the United States. You take the role of an Overseer, the leader of one of many great vaults that have been built to preserve humanity in the aftermath of Armageddon. It’s your job to grow your vault and ensure the survival of your vault dwellers, and ultimately their happiness. 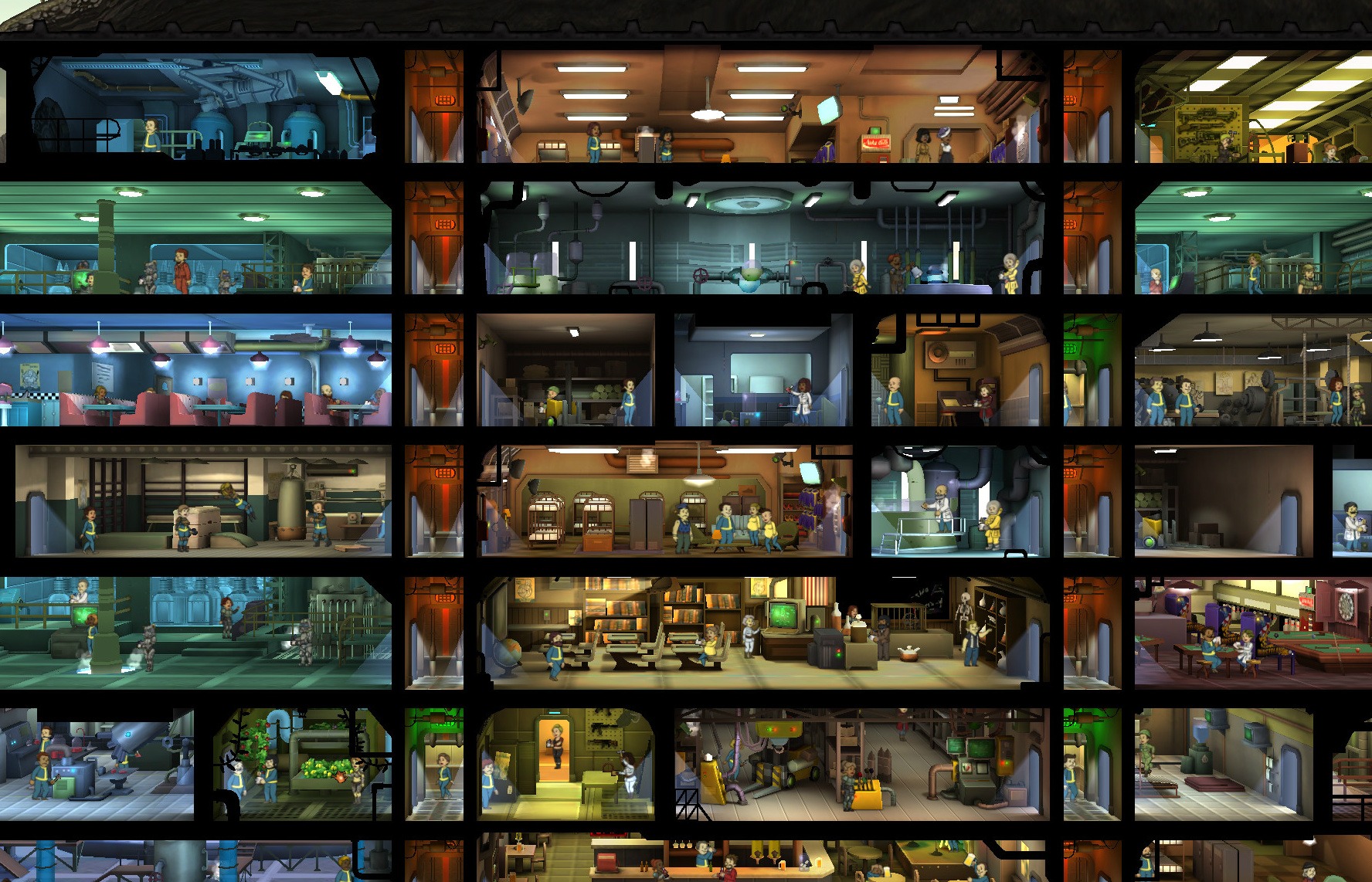 Fallout Shelter is similar in premise to Tiny Tower and Tiny Death Star. You’ll build rooms that allow you to supply food, water, and energy, the three essential resources of the game. You’ll also have to build living quarters to ensure your dwellers have a place to lay their heads. As more dwellers enter your vault, either from outside or by new births inside, you’ll slowly grow your vault into a labyrinth of corridors.

As your vault grows, so will its citizens. Bethesda has included Fallout’s hallmark SPECIAL (Strength, Perception, Endurance, Charisma, Intelligence, Agility, Luck) stat system, and each vault dweller will level up as they work at their assigned jobs. Additionally, each job requires skill in a certain stat for the vault dweller to be good at it. For example, water purification depends on the Perception stat, so the higher a citizen’s Perception, the faster you’ll get your next batch of clean water.

There are also items that can help raise your citizens’ stats. This is where the cuteness factor comes into play. The already adorable little vault dwellers can be dressed up in all sorts of costumes! Give one a priest’s robes and their charisma goes up, a military uniform increases strength, and a lab coat can add intelligence. There are also weapons that can be equipped to help your dwellers defend their home.

You can also equip a citizen of your choice to scour the wasteland for survivors and items. Although you won’t get to watch them in their journey, you can access a log that will keep you updated on all their actions outside of the vault. These RPG elements add a huge level of depth to Fallout Shelter and do a lot to add character to otherwise generic citizens. 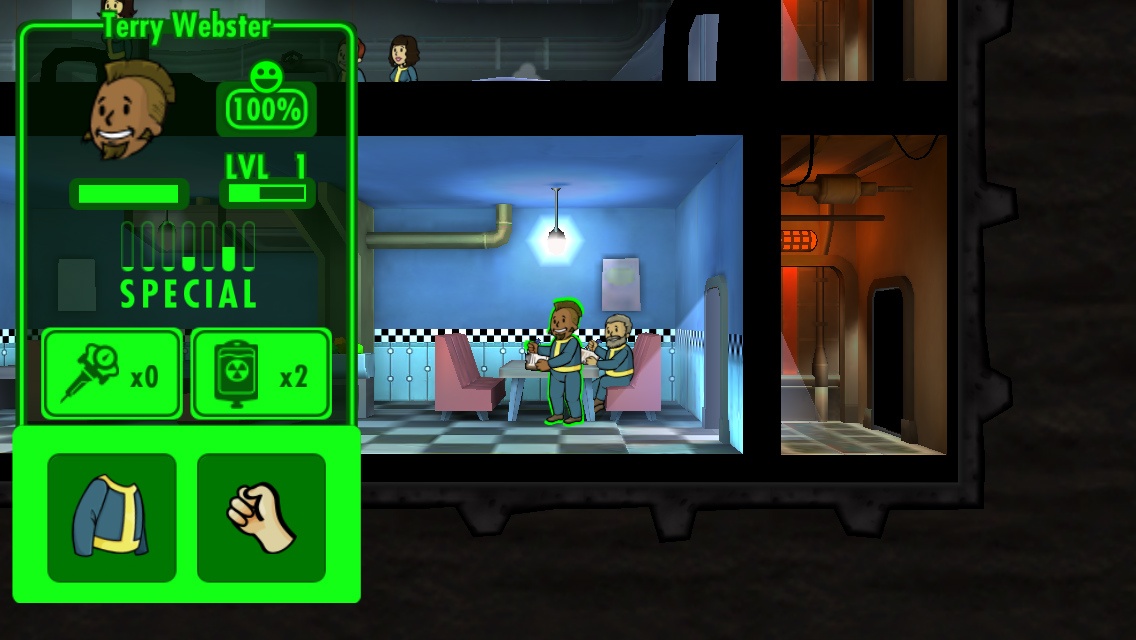 Graphically the game is quite impressive. Not only are the cute little vault dwellers presented in sharp, Fallout-faithful style, but the vault itself is quite stunning. Rooms give the impression of depth, and zooming in and out, which you’ll be doing often, doesn’t muddle textures or leave artifacts.

Although Fallout Shelter is free-to-play, it does things a little differently than most games that use the model. There is no premium currency, instead the game allows you to pay to receive lunchboxes that have four cards in them. The cards can do anything from giving you extra resources or bottle caps to build rooms with (that can also be earned at a fairly steady rate in-game), to items, and new vault dwellers. There are three grades of cards, normal, rare, and rarest, and the best cards will give you items and vault dwellers that are extraordinarily powerful. However, these lunchboxes can also be gained by completing in-game objectives, and none of their rewards make or break the game.

There are also timers, but instead of paying to bypass them, you take a risk to “rush” the task. If you need food, and the timer has 3-4 minutes remaining on it, you can choose to rush it. The risk will be presented on the rush menu as a percentage. If the rush is successful, you get your resource, but if it’s not, a fire or a rad roach infestation can break out that will injure those vault dwellers that are in the room, and possibly even spread to other rooms if it’s not put out in time.

The only major issue I had with Fallout Shelter is that it can be hard to see on older model iPhones. On my 5S I found myself squinting quite a bit and not able to enjoy the graphical detail as much as I’d have liked. However, on the iPhone 6, or any model iPad, you shouldn’t have any trouble at all.

All in all Bethesda’s entry to the mobile world was picture perfect. Although it’s a bit slow paced, Fallout Shelter is a great experience for mobile gamers. It features a respectable level of polish and it’s adorable and fun to boot. I hope it sets a precedent on how big console and PC game studios will treat their mobile endeavors in the future. If you haven’t tried it yet, rush to the App Store and grab it as soon as possible.

Green Ninja: Year of the Frog Review – Enter the Amphibian