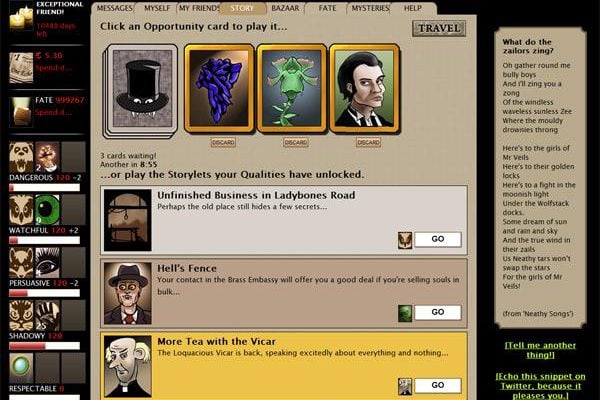 The rebirth of the classic text adventure

When I was a young’un, the things we would consider video games or digital entertainment was wildly different than what we enjoy today. This isn’t a “you kids today” talk, because I’m not saying it was better back then… it’s just changed a lot. Text adventure game were a legitimate genre back then, and they were compelling, and decidely low-tech. Really more akin to a choose your own adventure book than what you might think of as a video game. There’s not many around these days, but Fallen London does a good job of evoking the feelings of playing one while bringing those feelings to date.

I’m not really going to go into a ton of details about the plot or the story; as this is really just an embellished text adventure game set in your browser, the story is really the main reason you’re playing. Things like graphics and gameplay don’t really factor into the overall enjoyment of Fallen London, and as such really any spoilers or details I give you here would only serve to take fun away from playing it. Suffice to say the story is really well done, and the delivery of it works fabulously. 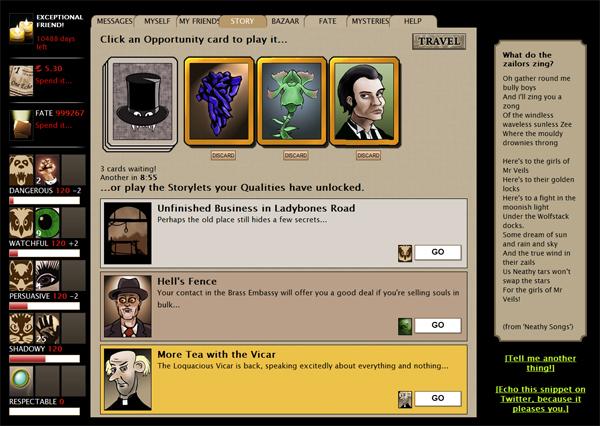 I say text adventure, but really that’s selling it kind of short. Yes, it’s told via text, but it’s much more involved than the text adventure game from back in the day. Back then, you were lucky to have a tiny inventory system. Here you have a huge inventory (from story items to clothes and weapons that you can buy) and different characteristics that determine your ability to complete certain tasks. They improve (or sometimes even decline) as you take action in the world, and can be increased with the use of items that you buy, win or steal in the game.

You’ll spend your time in London visiting different locales and taking on different pieces of the story (they call storylets), and after reading that bit of the story, you’ll have the chance to engage in different actions to draw that storylet to a close. Before choosing, you’ll be told of your likelihood of completing it successfully (based on inventory items and level) but you can always take a shot regardless. Just because something is high-risk doesn’t mean you can’t pull it off!

Of course there is a downside to trying nearly impossible challenges over and over and over. First is that you might incur negative effects that stack up and can hurt down the line. These may be something as direct as wounds from losing a fight, or you might raise people’s suspicion of you when you try and fail to pick pockets a bunch. In addition, attempting each of these challenges uses up an available action you have – and they’re not unlimited. 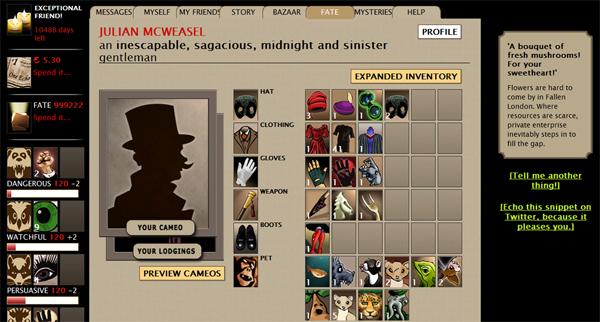 In that respect, you can sort of compare it to your standard Facebook game. You get a certain amount of actions to take for free which slowly recharge over time. You can gain a few bonuses by inviting your friends in on the story, so if you’re patient, you can play out the story from beginning to end totally free of cost. Or you can step up and toss some real world money at it to get bonuses, extra stuff, or more actions to speed up the action.

I found that, while some might want to speed up the progress, it’s not really necessary to the enjoyment of the game to pony up that cash. It seems a game that’s best when doled out in small pieces once or twice a day over the course of a few months. The story moves nicely enough, and isn’t so convoluted that you’ll lose the thread by not constantly staying up on it. I actually found that quite nice.

For a browser-based game, it’s super impressive the amount of stuff it’s able to track, and never once did I feel like my experience was hampered because this wasn’t inside Facebook or its own executable file or anything (though admittedly, Facebook would be a good fit for Facebook). This is hands down one of the best browser game we’ve ever played. The story was compelling but not overwhelming, which tied into the bite sized nature of playing it. If you’re open to the idea of a text adventure game in 2012, then you’ll have a hard time finding a better experience than Fallen London.