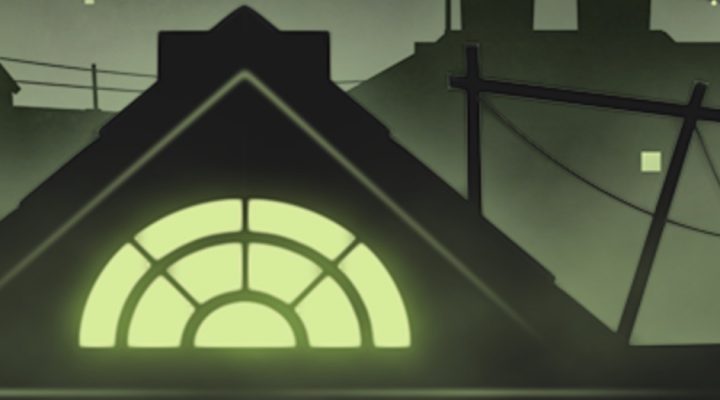 No shortage of things to do

The interface can be a little clunky

The world of Fallen London is as bleak and hopeless as it is captivating and humorous. Talking corpses and spiders that eat eyeballs are commonplace, and you’re a recent prison escapee just trying to get by. How you accomplish that is up to you.

This is going to make me seem old, but in many ways Fallen London is quite similar to the MUDs (Multi-User Dungeon) of old. Think online RPGs, but almost entirely text-based. Fallen London reminds me a lot of that, only with graphics and a point-and-click interface. My point is, you’re going to spend a lot of time reading. There are some pictures to look at – character portraits and item icons, mostly – but there’s no motion or action to any of it.

This isn’t necessarily a bad thing. 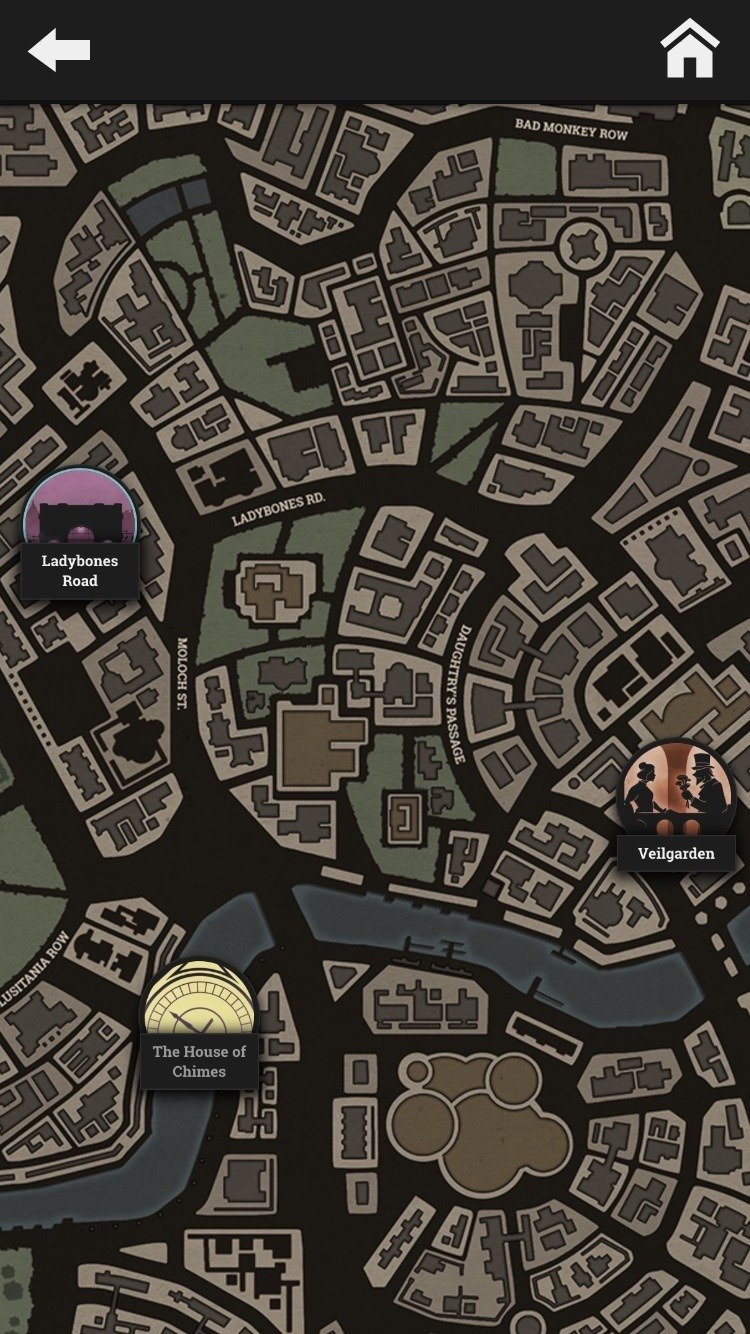 Despite the lack of visual stimuli (well, more dynamic stimuli, anyway), Fallen London paints a vivid picture of a very unique world. Event and item descriptions are usually a joy to read for the first time, and will quickly pull you into the world once you find your groove. Some of the clever writing does lose its luster when you end up repeating the same tasks over and over again, though.

Actually playing Fallen London is very simple. You start off in a prison cell, and you have to figure out the best way to escape. It’s a simple tutorial that you can’t really fail, but it will give you an idea of how you’ll be interacting with everything in the future – which is to say, you get to decide what tasks to take on and how to try and complete them. But that just covers the mechanics. The world you’ve been forced to inhabit is a bit more complex than that. 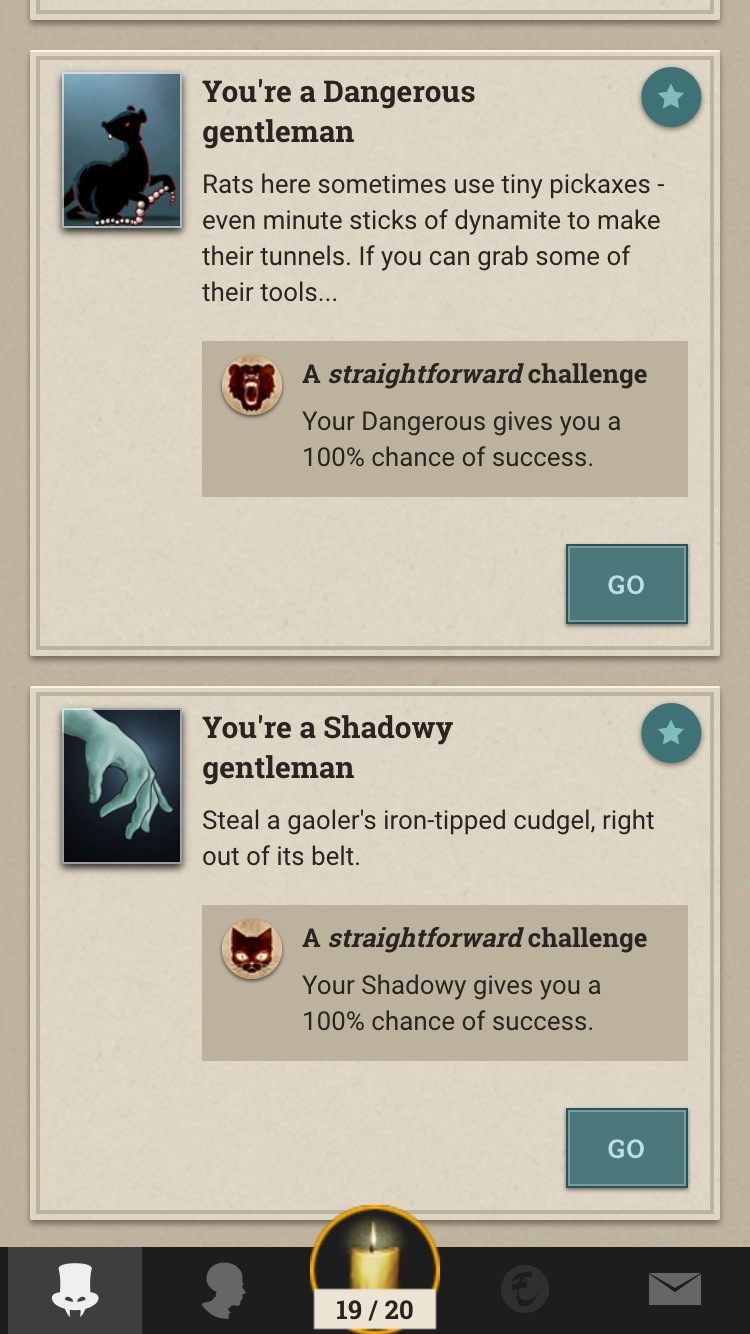 You can find a place to live; you can get a job; you can get a pet; you can solve mysteries; you can write a book; you can take on contracts to exterminate dangerous creatures; and most scenarios have at least a couple of different ways you can approach them (i.e. use brute strength, cunning, subterfuge, etc). Both success and failure usually results in the required skill increasing, too.

To put it bluntly, Fallen London is pretty great. To the point where I’m seriously considering an Exceptional Friend subscription (it gives you 40 actions instead of 20, and lots of other perks). It’s just a shame that the app itself has so many minor issues that tend to stack up. 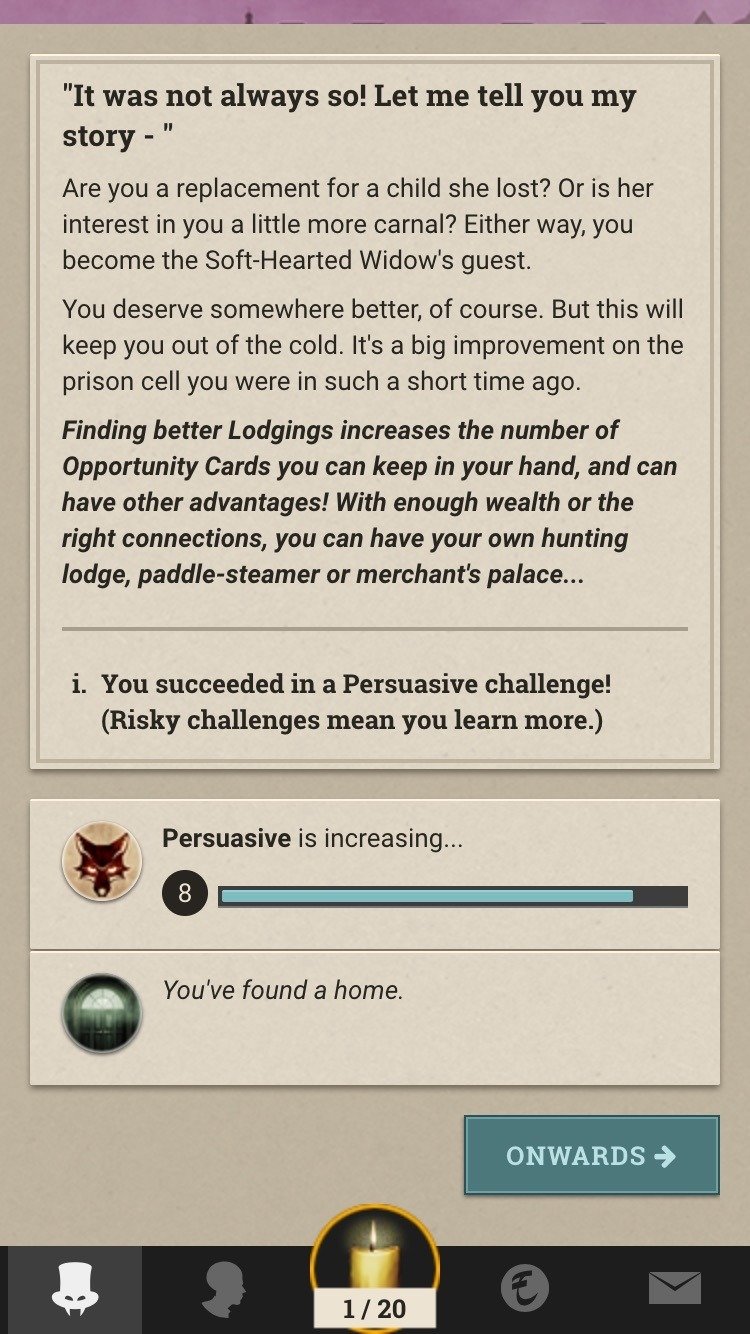 For starters, I’ve had to delete and re-install the app twice now, because for some reason it would hang just after the developer logo screen and refuse to start. It also consistently crashes every time I tap the View Profile button on my character screen.

Then there’s the inconsistent menu system that sometimes takes me back to a given job’s sub screen (with all the choices) and other times takes me back to a location’s main screen (so I have to scroll down, select the job again, etc). It gets to be rather clunky when you’re trying to repeat the same tasks in order to earn more goodies or increase skill proficiency.

Thankfully a couple of the other issues I was having, as well as the need to delete and re-install, seem to have been resolved after installing the latest update (1.2.1148 as of this writing). As the game has only been available for a few days, this seems to be a good sign that the developers are listening. 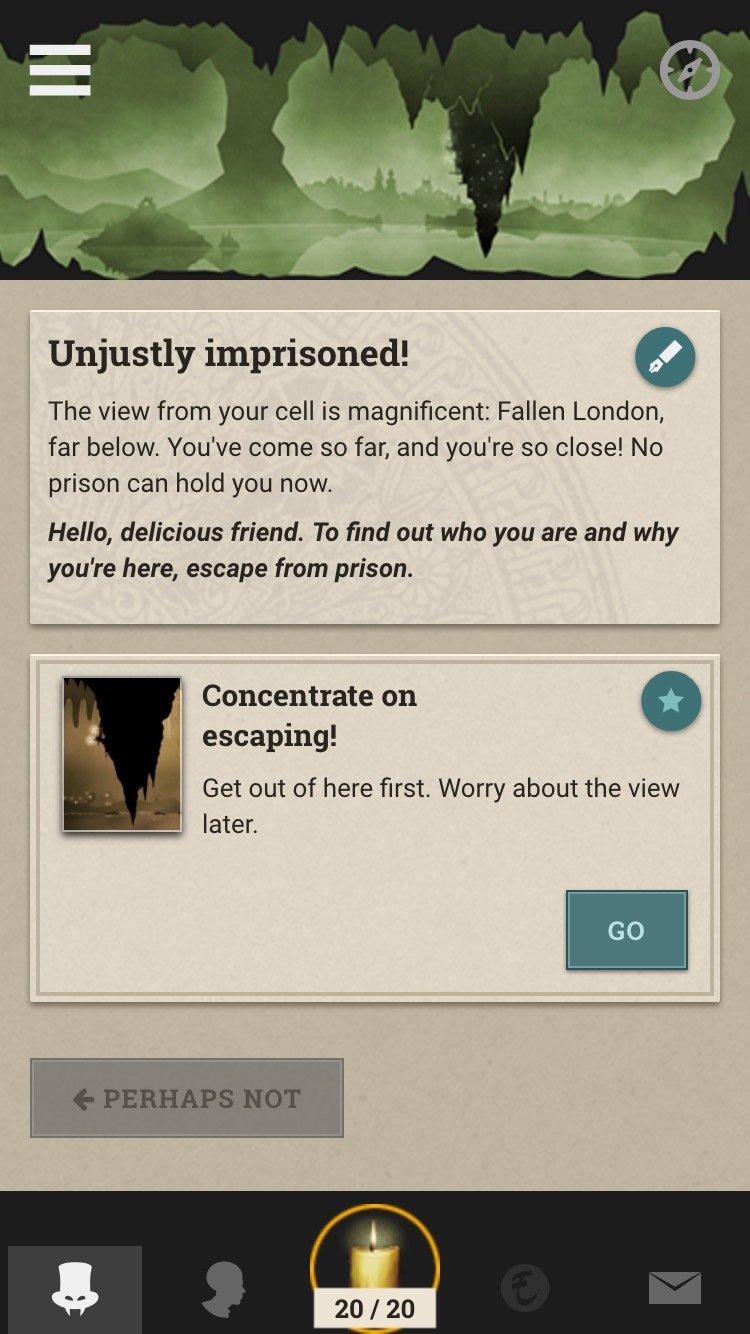 So the app is a little awkward to use and it might still be a little buggy. Does this mean you should stay away from Fallen London? Absolutely not! It’s a terrific adventure that you get to make for yourself, and it’s packed beyond reason with personality, charm, and horrifying monstrosities. Even if you’re not keen on the lack of on-screen action I’d still recommend giving it a look.