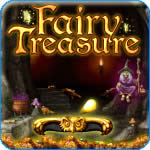 As a given rule of thumb, if you’ve played one block-breaking arcade game, you’ve played them all – general mechanics and extended features typically vary little between standard genre selections.

Thankfully, what they lack in ingenuity, recent titles like Fairy Treasure more than make up for in production values, relying on charm, personality and good, old-fashioned entertainment value to carry the day.

Trust us: A revolutionary romp this isn’t – plenty of competitors have more successfully aped everything from the brick-bashing adventure’s amusing bonuses to its catchy New Age soundtrack and rich fantasy theme. But from the moment the outing’s animated menu screen appears to the time you finally power down, after steamrolling dozens of its whopping 120 featured levels in a single marathon session, it’s undeniably an entertaining ride.

Never mind the storyline, which sees you chasing after greedy troll Dronk (who’s stolen a great treasure from the people of Trollandia) at the behest of the noble King Richard. Attractive presentation – magical flames charmingly burn themselves onto parchment before your very eyes – aside, it’s just an excuse to dive right into the action. All you really need to know is this… Controlling a raft located at the bottom of the screen, repeatedly smack onrushing balls into the various collections of rocks, stones and statues waiting above at every turn, with stages ending when you’ve successfully battered all into dust.

A simple premise, certainly, but also one that works quite well in practice, as you’ll note after fairies fly by, revealing the architecture and layout of the playfield associated with each scenario. While backgrounds such as misty lakes and mysterious forests themselves are static, and the aim of the game is simply not letting any balls past you, level design itself proves an immediate high point.

Forget slowly and visibly reducing granite blocks to rubble while collecting power-ups that award multiple balls and extra rafts or transform spheres into flaming fireballs capable of cutting through solid rock like a hot knife through butter. What you’re really here for are the little touches. Think lanterns which dangle from chains, falling to shatter with an audible crash when struck. Pots of gold which tumble clanking down when battered, spraying collectible coins (grab 100 for an extra life) on impact. Witches who sit astride remote outcroppings, casting spells that cause previously-destroyed structures to regenerate. Oh, and don’t forget blocks that move about on chains; potion bottles that break and splash, causing magical effects; and fairy helpers who, when set free from their prisons, help by destroying random targets too.

All told, a great deal of effort has been placed into making the world which you inhabit feel alive and interesting, helping separate the game from the veritable legions of lifeless clones with which it competes. Meaning that you won’t want to play Fairy Treasure so much for actual content (although the title admittedly handles well, offers excellent replay potential and features an array of challenging obstacles), but rather sheer novelty value. To wit, collecting bonus level-unlocking scrolls or symbols that power the ultimate weapon, an explosive, chain-mounted fireball, isn’t really the main draw. Rather, it’s enjoying the overall package, and way in which – when the action truly gets hopping – you’re frantically juggling several spheres while jewels, objects and sparkles rain down in an unrelenting shower of frantic excitement.

Our only real beef with the amusement: The amount of time it can take to finish off certain stages, given the general frequency with which special weapons appear. All too often, you’ll find yourself left at the end of a level with just five or six blocks remaining, each of which takes several strikes to batter down. However, should you have died recently or a power-up effect worn off, systematically removing the remaining targets, even with fairy assistance, can prove a frustratingly drawn-out process, especially if they aren’t adjacent.

Minor quibbles notwithstanding though, it’s a given: There’s hours of solid fun built in. The bottom line… Original Fairy Treasure might not be, but for a chip off the same old block-basher, it’s still priceless in its own right.