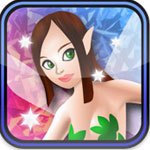 The Cottingley Fairies were one of the greatest hoaxes ever pulled in the twentieth century. In the 1920s, Elsie Wright and Frances Griffiths skyrocketed to fame for the photographs of “fairies” they had discovered while playing in the village of Cottingley, aided in no small part by an article Sir Arthur Conan Doyle wrote about the images and how they proved the existence of the spiritual plane. People both defended and attacked the authenticity of the photos, but Wright and Griffiths didn't admit they were fakes until 1981. Playing Freeverse's Fairy Trails on the iPhone, it's impossible not to be reminded of this story, mainly because the game lets the player experience a little of the fascination that confounded British Society so many years ago.

The premise behind this “augmented reality game” is a simple one: Fairy Trails turns your phone into a device capable of revealing fairies, fireflies, and butterflies that are normally invisible to the naked eye. Each of these on-screen beings look nice, having been rendered in a cute 3D style. Players will have to pan the phone around, searching for these elusive creatures. When they spot a fairy or insect, players need to capture it by tapping the proper part of the screen before it disappears.

A “detector” appears around the edges of the device's screen, and its changing color represents the power level. If the detector's level gets too low, players have to shake the phone rapidly for a few seconds in order to recharge it. The more creatures captured, the more powerful the detector becomes, which subsequently allows players to detect rarer and faster fairies.

With the iPhone, Fairy Trails utilizes the built-in camera and renders the fairies and butterflies over the landscape you happen to have the lens pointed at. With the iPod Touch, though, the creatures appear over a pre-rendered forest scene.

The main problem with Fairy Trails is that -while it's certainly well-made and features solid gameplay mechanics- it's a rather shallow title that doesn't take long to feel a bit repetitive. There's not really much of a plot, and the game will get old with anyone past the age of eight. It's also a game that's difficult to play in a room where there are other adults, mainly because players will quickly earn some odd looks by constantly moving the phone around while looking for the next fairy to capture.