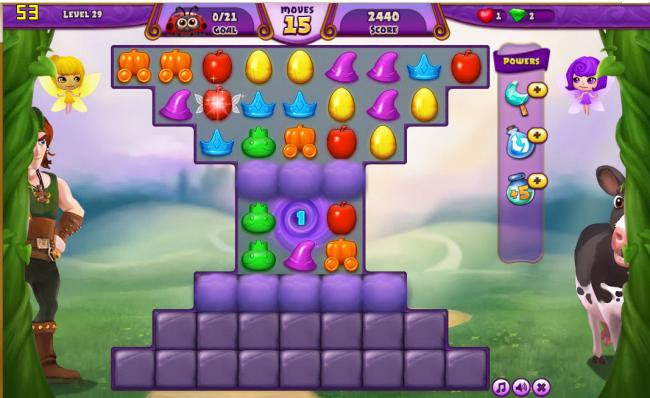 Rumplestiltskin ain’t got nothing on me and my match-three

Despite some hits and misses, Zynga maintains its position as the pre-eminent purveyor of “fee-to-play” (nope, that’s not a misspelling) and its latest pay-as-you-play is a simple little adventure puzzler called Fairy Tale Twist. Although this little match-three game isn’t as hard to put down as a certain candy-themed title that shall remain nameless, it succeeds in bringing enough new stuff to the match-three genre to make it worth your while.

Match-three games, even when they’re called “adventures” aren’t burdened by a ton of story, and Fairy Tale Twist follows this model. It quickly sets you up as the savior of your favorite fairy tale heroes, pitting you against their nemesis. Remember Rumplestiltskin, the height-challenged troublemaker with the anger management problem? He’s the bad guy in Fairy Tale Twist, although here he’s a mischievous young whippersnapper bent on sabotage rather than a grizzled old guy bent on swindling princesses.

To stop Rumplestiltskin from bedeviling people like Little Red Riding Hood and Jack (of beanstalk fame), you move around a storybook map by clearing sequences of match-three levels. Common as they are,  match-three games grab and hold players by offering them pretty graphics, satisfying sound effects, cool powerups and levels that continually change and challenge. Fairy Tale Twist has all of this. Its characters are appealing, its maps are colorful, and its visual effects make using powerups a fun, visceral experience. Even better, it continually offers new setups that require you to constantly revise your match-three strategy.

In addition to the usual match three (or more) gameplay and the idea of matching to remove obstacles, Fairy Tale Twist throws in a couple of cute new reasons for making matches: freeing trapped ladybugs and waking sleeping birds. It’s ridiculous how gratifying doing either of those things can be, but thanks to some great audio/visuals, it is. This could be because something about Fairy Tale Twist calls to mind modern slot machines. Perhaps that’s not too surprising, since Zynga has previously tried its hand in the online casino space. Whatever the reason, when all the sparkles, music and bells associated with a good string of powerups get going, you half expect the word “Jackpot” to appear on your screen. 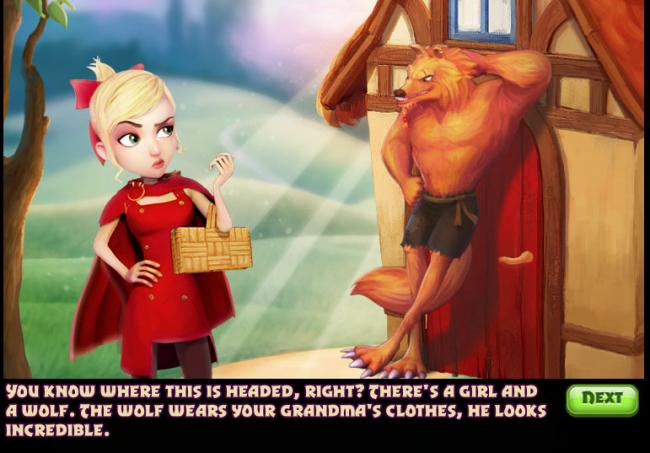 Other fun additions to the match-three gameplay include lightning-packed storm clouds that must be cleared out repeatedly, and whirlwinds that rotate the icons surrounding them. These two elements keep the maps dynamic, and combined with the ever-changing map layouts, make for levels that demand more and more skill as you go along. Of course, if you get tired of trying and failing at the same level or just want to hurry things along, you can purchase emeralds (the currency used to buy powerups and additional moves) with real-world money. Prices range from ten emeralds for $1.20 to 1000 emeralds for $80.00. And here’s where we come Fairy Tale Twist’s one and only weakness.

Like most everything else offered by Zynga, Fairy Tale Twist is designed to be a money sink. Perhaps gamers who would prefer to pay a single, up-front price for unlimited access are in the minority, but does anyone really want to pay $80.00 (or more) for a free-to-play game? Social games have limitations built in; that’s how they make their money. I get it. Still, being forced either to wait an hour or two for an energy/life recharge, or to allow an umbilical cord to exist between my wallet and Zynga’s coffers somehow throws a king-sized damper on my fun.

Fairy Tale Twist is a fun little game. It’s cute, lively, clever, (there’s even a sly reference to rapper Macklemore’s hit song, “Thrift Shop”) and offers plenty of thought-provoking map layouts and exciting powerups. Its only negative is that it was conceived as a social game and as such, has a hand perpetually in your wallet.