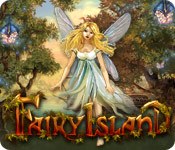 In Fairy Island, pirates capture fairy friends and imprison them inside magical diamond stones known as tokens.Your job is to track down the pirates around Fairy Island to free the fairies in this match-three adventure that has four play modes and three game modes. Each play mode is a different variation of match-three, which keeps things fresh and alluring.

Story Mode, of course, tells the story of your adventure and comes with two mini-games to uncover the island’s secrets. Upon first play, only Normal play mode is unlocked with the others coming later. As you work your way around the island, you’ll find pieces of the pirates’ map to get you where you need to go.

Every few levels bring up the catch the acorn mini-game. The number of acorns you need to catch increases with each play. Here, one acorn flies up the screen until you click on it perfectly. Fairy Island is fussy about where you click the acorn, and most players will fail this game more often than not.

You must catch every acorn. Anything less is failure and that means no bonus acorn to use for power-ups. So if you miss an acorn early in the mini-game, you might not bother with the rest of them unless you care about high scores. On the other hand, it makes earning power ups more challenging. It’s possible you won’t have all the power up upgrades at the end of the first trip through story mode.

Fairy Fare, the power up store, offers nine types of power ups with three upgrades each. Power ups help you finish the level faster or increase your score. Five power ups match the colors of the tokens. As you break tokens of the same color, the associated power up gauge fills. When it’s completely full, the power up automatically activates. Fire Fairy, for example, is a red token power up that breaks tokens with exploding fireballs. The non-colored power ups give you more time, time bonuses, and bring power ups faster.

You can earn golden acorns another way. A glass tube sits on the left side of the screen and it fills up with fairy dust as you make your matches. When the tube is full, you earn a limited amount of time to break tokens for combo score bonuses. You earn a golden acorn every 10 times you activate the bonus feature.

It’s enchanting to watch the power ups do their job and seeing a fairy flee from prison. Sometimes the tokens sound off like fireworks leaving you in awe of the sound and visual effects.

Every play mode – except for Puzzle – requires freeing all of the fairies from the tokens with a glowing diamond where they remain imprisoned. Normal play mode adds a new line of tokens on the bottom of the grid at fixed intervals. In Locks mode, clear the grid until no matches remain. Whatever tokens left will receive a lock and new tokens fill in the empty space. The only way to destroy them is to match them twice: once to unlock and then a second time to destroy.

Shifter works like Normal mode except tokens fall from the top at fixed intervals. Tokens also shift to the right as you make matches. Finally, Puzzle mode – the most unique – requires clearing all tokens to pass the level. Puzzle mode also has no power-ups. The different modes require different strategies to keep the brain cells hopping.

The game’s delightful flexibility lets you play whichever mode you wish for the next level once you unlock all of them. This provides many options for playing a level. If you fail a level, you can replay it in the same mode or change the mode. This comes in handy when you get sick of replaying a hard level plus it gives the game a high replayability factor.

If you play Story Mode again, you’ll retain all the power-ups you have and work to a bigger score as well as try the other play modes. Although Fairy Island resembles an arcade game more than an adventurous one, the ending in Story Mode falls flat with a screen popping up with text that’s hard to read.

Time Mode gives you five minutes of anything goes. You level up each time you free the fairies for the level. See how far you can get and challenge yourself to beat previous high scores. Time could become dull after a while as you can only get so far in five minutes.

Continuous Mode has no time limit and lets you play all the puzzles for one of the four modes. Unlike Story Mode, you must pick one play modes and stick with that. You might decide to skip Story Mode the second time around and instead discover all the puzzles for each mode in Continuous Mode. However, the down side is that the game won’t save your progress if you exit in the middle of it.

The tutorial gives you all the details on the bonuses, power-ups, and features. But when you’re learning the game, it overwhelms and doesn’t make sense. The only way to see the tutorial again is to create a new player.

All these modes, both game and play, provide a diversity of ways to explore Fairy Island. The game has charming graphics and fitting sound effects supporting its addicting match three game play. Story Mode contains 100 levels and once you finish that, you’ll want to play again whether it’s Story Mode or another mode. While the tutorial could use some work, Fairy Island brings something new to the match three genre. It’s sure to enchant match three-fans both present and future.