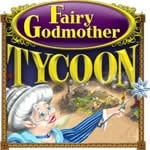 We all have fond childhood memories of sugary sweet fairytales with happy endings, where pretty girls get to marry handsome princes thanks to a little magical intervention from trusty old Fairy Godmother. But this is the 21st century, and Fairy Godmother doesn’t just grant wishes for fun anymore – she’s in it for the cold hard cash.

In Fairy Godmother Tycoon, the name of the game is potions. Fairy Godmother has built a vast empire in the land of Onceuponia (say it out loud) by creating and selling potions to peasants to remove various curses. As her assistant, you’ll help her manage and expand that empire by doing things like buying ingredients, setting prices, purchasing upgrades to your shop, and hiring goons to intimidate the competition.

There’s quite a bit you’ll need to know in order to run a potion empire, but thankfully the game eases you into it gently in the first level, which is aptly named Tutorialville. The key to running a successful biz lies in mastering the basics of supply and demand. Each day you’ll receive a news byte telling you the forecast for curses that day; from there you can predict how many potions you’ll need and buy enough ingredients. You can also set the price of your potions and invest in some advertising.

Once you’re all set, you begin the day and watch it roll by in real time as customers go about their daily routines. If you’ve done your preparation correctly, your marketing campaign will lure them into the store, your prices will be reasonable enough that they won’t storm off indignantly, and the mark-up on the potions will be high enough to bring in some decent dough.

Those are the very basics, but once you leave the comfy confines of Tutorialville things will start to get nastier as you go up against rival stores. You’ll find yourself strategically placing "goons" – special marketing tools – to either guide peasants to your store or try to discourage them from visiting other stores – and your rivals will be doing the same. As you research more complicated and expensive spells, you’ll also need to invest back into your store by upgrading your warehouse, storefront, in-store entertainment and other things to keep your well-oiled empire running smoothly.

Finally, since you’re a fairy and have magical powers and stuff, you can purchase a few different spells to help you during the real-time part of the game, such as freezing an opponent’s goon in its tracks or flying in emergency ingredients if you run out.

There are eight fairytale-themed villages to set up shop in, and they come with names like Three Piggyton, Shoe Haven and Sure Would Forest. Since Fairy Godmother won’t be happy with anything less than a monopoly, your goal is generally to either acquire a certain minimum net worth or cash reserve, or to simply put all the competition out of business.

Given Fairy Godmother’s status in the community, the locals often come to her (and, by extension, you) to try to solve their problems. These dialogues play out as a series of multiple choice questions, and serve as interesting diversions that, if you help people by giving them good advice, can reward the store with extra cash and reputation boosts.

The game’s "tycoon" mechanics are modelled after other successful management sims like Rollercoaster Tycoon, Zoo Tycoon and Railroad Tycoon. However, equally impressive is the game’s strong story, great dialogue and wicked sense of humour, which throws in a ton of fairytale references filtered through a contemporary lens with snide references to modern life. (Think Shrek.)

For example, some of the dialogues you’ll encounter involve investigating a betting ring at the race between the Tortoise and the Hair, moderating a property dispute between Little Bo Peep and Mary – who each lay claim to the same lamb – and helping the Ugly Ducking overcome her self-esteem issues.

Fairy Godmother Tycoon is definitely an A-list package that does most things right, but there are a few gripes that are worth mentioning. The real-time part of the game takes place on an overhead map of the village, but the actual interior of your store – where most of the action is taking place – is a tiny little window down at the bottom left. Since you end up investing a lot of money into your store to fill it with fancy entertainment and flashy-fast potion makers, it would be nice to be able to get a decent look at the store itself, either by having a bigger window, a zoom option, or a way to toggle between exterior and interior views.

Also, a real-time strategy game like Fairy Godmother Tycoon absolutely screams for an online multiplayer mode so that you can go head-to-head against other human players. Alas, there’s no multiplayer to be found.

Complaints aside, Fairy Godmother Tycoon is perhaps the quirkiest "tycoon" game yet, and it’s definitely a hoot to play.