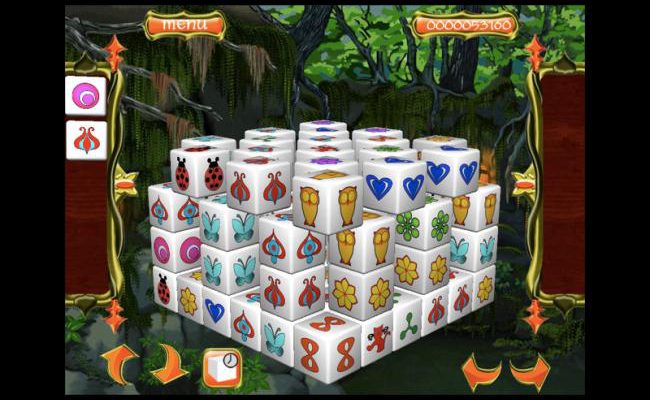 Match trios of different blocks in a 3-D puzzle.

What pops into your mind when you think of fairies? Tinkerbell? Giggling, winged girls with wands? Sparkle-sneezing wood nymphs sitting on toadstools? In FairyCubes, 3-D puzzles are added to the list of all things pixie.

The game tests your visual-spatial intelligence and matching ability. That second part is pretty easy, but the fact that it’s a 3-D puzzle is what makes it tough. You’re given a stack of variously marked cubes, and you beat the level when you get rid of all cubes. For example, some cubes are branded with a green starburst, others with a ladybug, and so on. Click on a trio of cubes with the same design to eliminate them. Since the stack of cubes is in 3-D, there are many cubes in the back of the pile that will be out of your view. Use the arrows at the bottom of the screen to rotate the stack so different cubes become visible. If you can’t find a group of three of the same cubes, up to ten extra cubes will gradually appear on the sides of the screen. If all ten pile up, though, it’s game over. 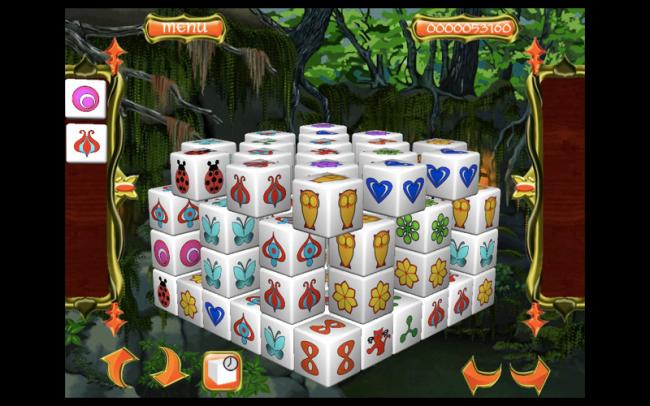 My biggest gripe with the game is the pacing. It starts off (and stays) pretty easy, until about halfway through the game (level 20 of 45 levels). The extra cubes on the sides start to fill up faster, and the puzzles get bigger and more complex, with more types of cube markings to match. But 10, 15 or 20 levels is kind of a lot to plow through to get to the good stuff. Perhaps if there had been a difficulty setting you could have chosen at the beginning of the game (easy, medium or hard), players of different skill levels could have been accommodated better. Some people may lose interest before the game even starts to get good.

The presentation could have been a bit more fleshed out, as well. There’s only one background song and, while it fits the forest-y, ethereal mood of a game about fairies, it’s a tune that gets pretty repetitive. Other touches like different backgrounds could’ve helped, as well.

That being said, I love a good puzzle game, and FairyCubes makes good innovation with the concept of a 3-D puzzle. The pressure of having to know the locations of unseen cubes, as well as what types of markings the cubes have, makes for a solid added challenge. Not to mention the fact that some of the markings begin to look more and more similar as the game progresses.

FairyCubes is certainly a fun puzzle game, even if it might struggle to retain some players’ interest. The rejection of 2-D is an underused, refreshing approach to the genre, however.