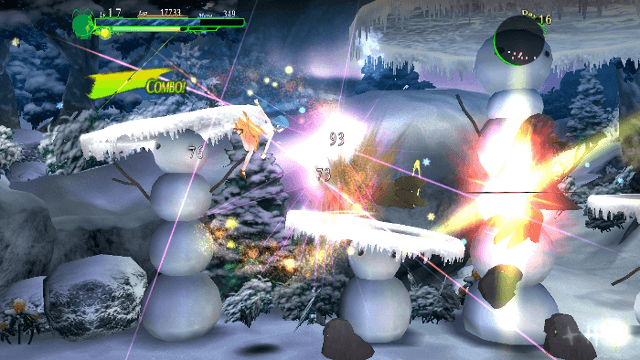 Fairy Bloom Freesia is a 2D manga-inspired side-scrolling fantasy beat ’em up with light RPG elements. You play as a young, green-haired and spunky fairy-lass named Freesia who has been given the sacred duty of protecting the psychedelic forest she dwells in from any manner of sketchy creature. One day, a particularly disturbing set of events begins to unfold, and after Freesia is forced into slaying an invading horde of golems, Listine – a deluded young aristocrat from a neighboring kingdom – arrives and declares his intent to rip the heart from the ancient Jomon tree (a nature spirit of sorts that seems to have some kind of Obi-Wan/Luke type of relationship with our tree-hugging protagonist) and use it for dastardly deeds concerning the genetic engineering of ultra fairy super golems – or some such. The plot’s pretty ridiculous, honestly, and isn’t where the game shines. It’s the frantic ping-pong paced gameplay and RPG-like customization features that make this a rather decent pick-up for fans of the genre.

The game begins with you standing in a small field that looks not unlike would happen if Hayao Miyazaki decided to slap together a Smash Bros. level. The land suddenly fills with enemies, and you’re off like a rocket in cosplay to kick, slap, and slash them around the playfield collecting experience points for every one you defeat. Once a sufficient number of your freaky foes are vanquished, you’re given the opportunity to use the points you’ve earned to upgrade Freesia’s various offensive and defensive character attributes and/or buy new skills that keep the game’s dynamic combo system impressive throughout.

You’ll encounter several types of battles as you progress: You’ve got giant donnybrooks like the one mentioned above, you’ve got levels where your main purpose is to protect several energy portals from attacking enemies, and you’ve got boss battles that further the silly story. The combo system allows for enemy juggling and huge hit counts, so fans of the classic Sega Saturn game Guardian Heroes (and its spiritual 3DS successor Code of Princess) should feel right at home here. While Fairy Bloom Freesia lacks the multi-plane movement of those two titles, it makes up for it with the lightning fast pace of its gameplay.

The graphics are really nice, and should bring a smile to the face to any otaku out there. Expect to see some of the familiar tropes of the anime/manga scene, though. The backgrounds and enemy design in particular bring to mind movies like Princess Mononoke and Spirited Away. Unfortunately, there isn’t much variation in enemy type as you end up fighting the same models again and again. The general chaos and craziness that unfolds onscreen every time you press the attack button makes up a bit for that loss, though.

The sound design is similarly nice, and appropriate to the onscreen action. The music is pretty rich and nicely composed — energetic, but not bombastic. The hit sounds for the moves you pull off could use a bit more bite, though. 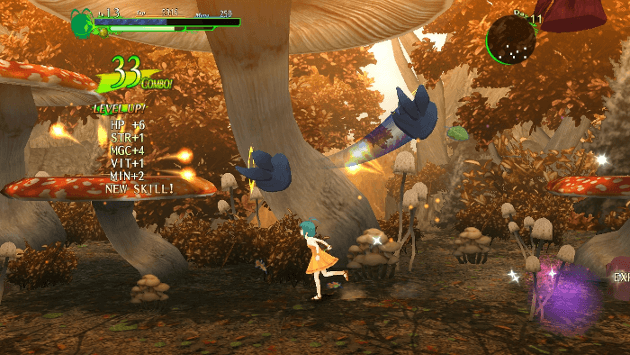 Fairy Bloom Freesia is rather short (I’d estimate the completion time to be around the 2 hour mark), but it’s a fun arcade experience. I wouldn’t say it’s the best game of its ilk, but it’s at least deserving of a playthrough or two. Down the road, I’d love to see a more fleshed-out sequel, if only to soak in that gorgeous scenery once again.