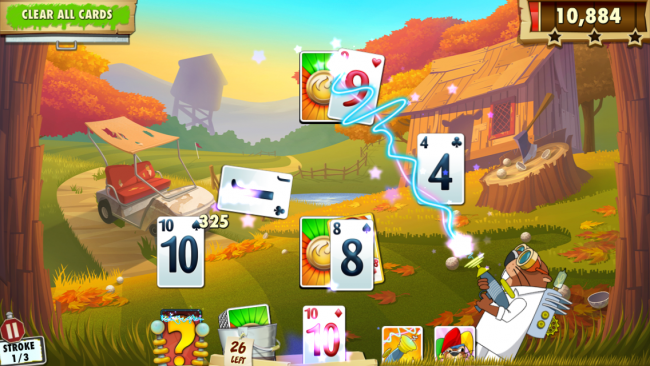 The best in solitaire is back

There was a time – let’s call it “the nineties” – when Solitaire was seemed like the most popular PC game of all. Not because people loved it, mind you, but because it was free and came bundled with Windows. Still though, people grew to love it. As a classic card game that we’re all familiar with, the “just one more game” pull of solitaire has always been hard to avoid.

Despite its popularity, solitaire went years before it got a truly decent upgrade. Plenty of gamemakers had tried, mind you, but it took Big Fish Games to really hit on a winning formula. Combining elements of golf and cards, the original Fairway Solitaire debuted back in 2007 and has since been followed by a litany of releases. You probably know it best by its second iteration, which became something of a cult classic after its port to mobile devices back in 2012. If you’ve played either of these, there’s a good chance that you already know that Big Fish + solitaire is almost always a winning combination.

Fairway Solitaire Blast is the latest release in the franchise, and the first that’s built from the ground up with mobile gamers in mind. In fact, at the time of this writing, it’s a mobile exclusive.

As you might have guessed, where the word “mobile” gets thrown around, the term “free-to-play” is quick to follow. DON’T PANIC! This is the third free-to-play game in the Fairway franchise, and despite some earlier missteps, they’ve managed to work the bugs out and hit on a winning formula. Nothing is locked behind a paywall. Nothing feels hamstringed by greedy design choices. 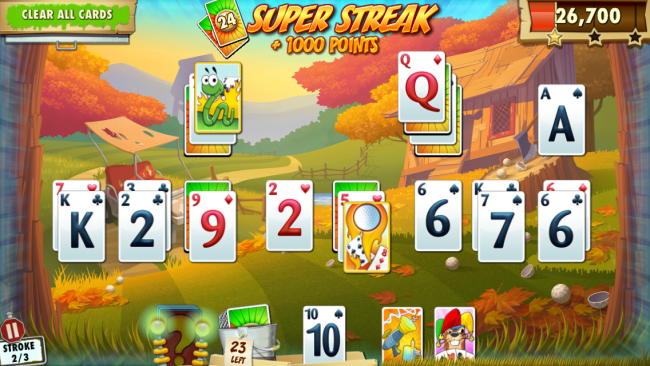 To put it bluntly, Big Fish has copied the monetization structure of King games like Candy Crush Saga part and parcel – and they’re all the better for it. There are some bonuses available if you want to buy them; you can pay to continue when you run out of cards; you have five lives, but only lose them if you lose a match. You don’t ever have to pay for anything. It’s a really fair system, and one we’ve always admired in King releases, so we’re delighted to see more companies adopting it for their free-to-play fare.

Of course, what really matters is the gameplay. SPOILER: it’s exactly what fans of the series are hoping for.

Like past games, each stage in Fairway Solitaire Blast presents you with a uniquely shaped solitaire puzzle to solve. You’ll be given thirty cards in your deck with which to clear the board, and in the case of Blast, you’ll need to make those cards last across three puzzles (or “strokes” as the game calls them).

The trick is to plan out your moves ahead of time. How big of a chain can you create using just the one card in your hand?

There are plenty of bonus cards too, both in your hand on the board, that help to shake things up or get you out of a jam. You might reveal a bomb that eliminates surrounding cards, or use a joker from your hand to start that next big chain that clears the field. Little twists like this manage to keep things exciting and offer up a nice level of strategy, as you’ll want to be careful about which cards you play when. 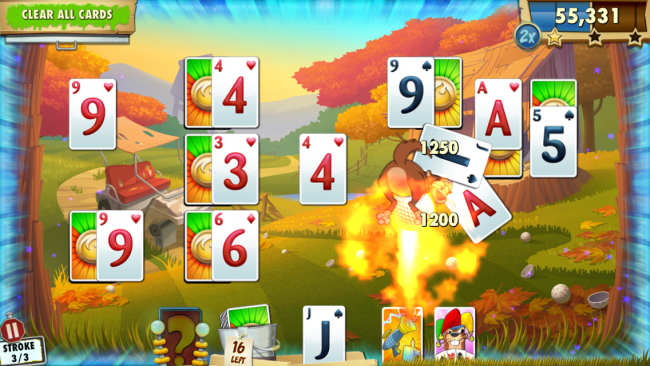 The production values here are also top notch. Adorable animations, sharp graphics, and great sound effects (like the standard golf crowd “Awwwww” when a putt is missed) all tie together to deliver a well-polished presentation.

I always found it strange that King didn’t bring Pyramid Solitaire Saga to mobile devices, but their loss is Big Fish’s gain. With no real competition in the free-to-play solitaire market, and plenty of existing love for the Fairway Solitaire franchise, the company has a real chance to dominate the mobile charts with this one.

And, frankly, we hope they do. Fairway Solitaire has always been great, we’ve been saying as much for years. Now it’s time the rest of the world found out.