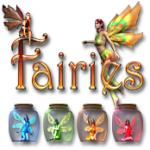 Believe in pixies: Those slinky, gossamer-winged harbingers of whimsy and delight not only exist, but do so within the confines of your very own desktop.

Tangible proof rests in Fairies, one of the sharpest, most polished puzzle games we’ve ever had the pleasure of laying trembling fingers upon. Filled with magical moments and boasting an equally enchanting presentation, it won’t be long before you too fall under the game’s spell.

A caveat before beginning – expect to be blown away by this puppy’s production values. From a fully vocalized theme song to lavishly painted backdrops (twilit fields, dusky plains, mysterious forests), it’s obvious some serious effort was placed into the game’s execution. Don’t be surprised when you fire it up to find the program could easily pass for a full-priced digital diversion.

Packing slick special effects (e.g. sparkles and shimmering lights) and a killer New Age soundtrack, this much is obvious right from the get-go. You’ll definitely be getting your money’s worth. Just how much so doesn’t become fully apparent though until you actually experience the scintillating play-by-play action itself.

Each stage is filled with rows of jars containing sprites of every conceivable color. Blues, purples, reds, oranges, greens… No matter where you turn, dazzling graphic touches greet the eye.

Your goal: Make horizontal, vertical or L-shaped patterns of three or more like-shaded fairies, which disappear from the board with a flourish and flutter of tiny wings. Doing so requires that you click on random jars then slide the mouse left or right to tug containers – which move as an entire row – into position.

Of course, jars stacked on top of ones you’ve eliminated fall down to replace any gaps below. Clever players can take advantage of this effect by positioning bottles in such a way that giant combos are created, generating awe-inspiring results.

Mastering this domino effect is, predictably, crucial. To beat each level, you’ll have to make enough matches to fill a scale with glowing fairy dust within a disconcertingly small amount of time.

Happily, power-ups prove plentiful, helping bolster your chances of doing so. Various collectibles – earned by including them in matches – can change the color of nearby fairies, cause all sprites of a single type to disappear, multiply your score 10x or remove random jars. A handy gremlin additionally pops up periodically who you can click on to haphazardly recolor certain jars.

But beware – locked bottles also appear from time to time. Unless circumvented by collecting a scissors power-up or being included in a match, they’ll prove an immediate obstacle. The issue: Rows containing such impediments can’t be moved, rendering your ultimate task that much harder.

Bearing this in mind, the most unexpected part of Fairies is how well-balanced everything feels.

Whether you’re 10 stages into the 100-level tale or 50, each scenario – while nail-bitingly difficult – never seems completely insurmountable. Frustrating as having to replay lost challenges appears at first brush, you’ll nonetheless watch your performance get progressively better with each successive attempt.

Such perfectly-honed playability lends the title a dangerously addictive undercurrent: 15-minute sessions quickly turn into multi-hour marathons without your conscious acknowledgement. Understanding why is easy, however. Everything’s laid out simply, cleanly and in such a manner as to ensure maximum universal appeal.

Specifically: Adventure, wherein you work to collect fragments of pictures to free all-powerful fairy queens. Classic, which does away with time constraints… Relaxed, a casually endless experience designed for those seeking a less stressful take on the standard formula. And, most notably, Playback, a Simon-style memory game that requires tapping groups of fairies in set order to reproduce catchy rhythms.

Between amazing hands-on performance, first-rate audiovisuals and staggering depth, Fairies helps set the standard for what we’ve come to expect from classic casual games. While it won’t connect with everyone – if you’re no fan of high fantasy, it would be wise to seek other accommodations – few can fault the title’s charm or delivery.

Those who haven’t played already are encouraged to do so now. Longtime enthusiasts, consider revisiting with it. A game even Tinkerbell herself would adore, well… Frankly, there’s no denying this one’s almost mystical appeal.