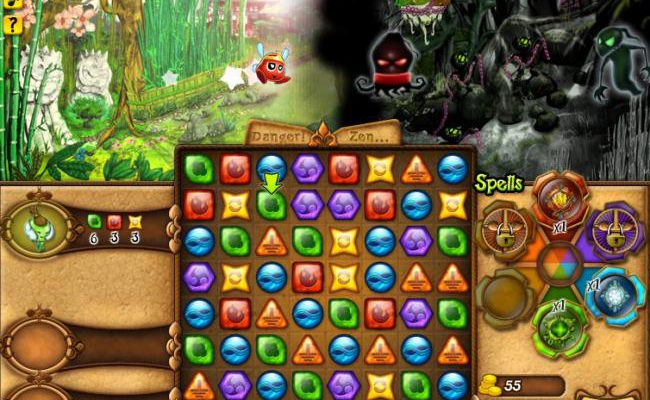 Light and dark have forever been locked in a never-ending battle. We’ve read about it in books, we’ve heard about it in religion, and we’ve seen it each summer thanks to the latest Hollywood blockbusters. Now light and dark are choosing a new battlefield to wage their never-ending war: a match-3 game in your browser.

Faeries vs Darklings is a match-3 offering that attempts to mix in a secondary element, not unlike Puzzle Quest or Devil Invasion, to keep the genre feeling fresh and new. In this case that secondary element is the eternal fight between good and evil. Darklings are trying to poison the land of the Faerie with their wicked ways, perverting their leafy green lands into something dark and twisted. To keep the darkness at bay, players will unleash Faeries to defeat the Darklings through the power of match-3 gameplay.

For every darkling that appears, you’ll be given the opportunity to unlock a similarly colored faerie to defeat it. Unlocking these faeries should feel pretty familiar to veterans of Puzzle Quest, as the method used here is identical to Puzzle Quest‘s spellcasting system. To unlock each faerie, you’ll need to clear a certain combination of gems from the board. It may be 3 blue and 3 green, for example, or 6 yellow. Once unlocked, the faerie will appear in a scene above the playing field and defeat its like-colored darkling. 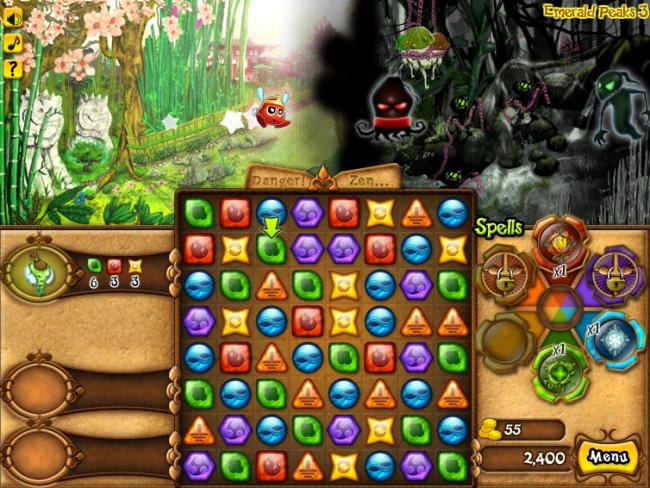 Players who manage to match 4 or 5 gems rather than the customary 3 will be rewarded with coins that can be spent to purchase spells. The spells are single use only, and saving the funds to purchase them can take a surprising amount of time, so you’ll want to use them sparingly. Thankfully they all seem to be aimed at getting you out of a tough situation, and since those are relatively rare in Faeries vs Darklings, there’s really no reason to waste a spell before it’s time.

At the moment only two worlds are open for play, though the map shows an additional five more that will no doubt be available down the road. Similarly, two forms of magic appear on the spell select screen that aren’t yet available for purchase. With a big “Beta!” label prominently displayed in the corner, it’s safe to assume all of the locked content will be fleshed out in the final product.

One of the things this early version of the game does confirm for us is the amount of polish that’s gone into it. The visuals are crisp, clear, and beautiful, rivalling – if not besting – the type of art seen in most download-only match-3 games. The music is a perfect fit as well, offering up a deeply satisfying original score that most audiophiles would be more than happy to purchase given half the chance.

The downside to offering only a taste of the game this early in the process is that it’s hard to get a feel for what the complete Faeries vs Darklings experience will be like. While the core gameplay will no doubt remain the same, it’s impossible to know what the level of challenge will be. As it stands, the two worlds offered are an alarmingly simple task to complete. Not once during our play through did we allow the Darklings to overcome us, and only during the final battle on the second island did we begin to feel a sense of panic and urgency, as we attempted to fill the hefty gem order needed to unleash our faerie.

Consider this one worth checking out for its high production value and charming gameplay, and worth coming back to down the road once they’ve had the chance to flesh things out a bit more. With a solid presentation and a Puzzle Quest inspired twist, Faeries vs Darklings has the potential to become the next runaway hit in the world of match 3 games.