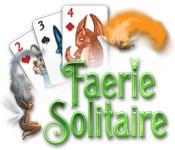 Some modern solitaire experiences ruin the basic pleasure of the game – which comes from organizing cards into groups based on a simple set of rules – by adding too many complicated power-ups and contrived game-changing variables. Happily, that’s not the case with Faerie Solitaire, a dead simple solitaire experience that sprinkles just the right amount of fun twists and tweaks to keep the game interesting without making it too convoluted.

The narrative, which plays out via short bits of text and static paintings and concerns a fellow who explores a series of faerie lands, is shallow and forgettable. Still, it serves its primary purpose, which is to break up the game’s 400-odd hands into perceptibly different stages and levels each with their own aesthetic. The images and backdrops aren’t exactly gallery worthy, and you’re unlikely to want upload the music to your iPod, but the artistic elements suffice for such a simple game.

And with the story and art playing such minor roles, players are able to focus on the game itself, which is where the true delight of Faerie Solitaire lies.

Each hand is composed of rows and/or groups of cards with the ones nearest the bottom of the screen turned up and in play. The object is simply to find an in-play card that is one number higher or lower than the last card turned up from the deck. Suits don’t matter; you’re just looking to count up or down. Once all the cards have been removed from the table it’s game over, with the player scoring a "perfect" hand. Should you go through the deck without removing all of the table cards you’ll simply move on to the next hand in the level.

Levels are broken into nine hands, and each level has its own objective. For example, sometimes you’ll have to achieve a certain number of perfect hands, sometimes you’ll need to try to string together a combo of a certain size – combos being a string of moves made without having to draw another card from the deck – and sometimes you’ll simply need to earn a set amount of cash (money is awarded for each hand based on how many table cards you manage to clear).

It’s a simple concept, no question, but a surprising amount of strategy is involved. To create a large combo you’ll need to plan ahead, examining all of the available cards to make sure you can play them in an order that allows you to keep making moves. What’s more, some of the cards behind the in-play cards are turned over and some aren’t, which means you’ll need to decide whether your current and future combos will be better served by creating access to known or unknown entities.

And just when you think you have it all mastered, developer Subsoap begins to add in clever little variables, like stacks of frozen cards that need to be unlocked by a fiery card buried within another group, or rows of cards ensnared by vines that can only be removed by accessing a rose at the very back of the table. These obstacles tend to change a player’s tactics, making big combos take a backseat to the task of gaining access to the locked cards.

What’s more, players will collect lots of subtle aids over the course of the game. We’ll earn the ability to peek at the next card in the deck, see how many cards are remaining, and undo up to three moves per hand.

But this leads to perhaps the game’s only significant issue: its difficulty, or rather lack of it. While you won’t earn a perfect in every hand, it’s unlikely that you’ll even come close to failing any of the first 30 or so levels. Objectives do become more challenging near the end of the game, but they never become a serious test of one’s abilities.

Luckily, a bonus mode called simply "Challenge" partially corrects this problem by offering up levels with some truly devious objectives, such as completing hands in under a minute.

And the Challenge mode represents just one of the game’s unlockables. As the game progresses we collect eggs, which we can hatch and evolve by collecting resources that appear in each hand. These pets don’t modify play, but they do act as trophies of a sort. And there are dozens of achievements to earn, as well as a third mode of play that allows players to go back and play any story level they want.

The game’s simplicity and rudimentary artistic design aside, there’s well over a dozen hours of content here. And since there is an inherent randomness to each hand, replay value is very high. Simply put, Faerie Solitaire gives you plenty of solitaire for your buck.