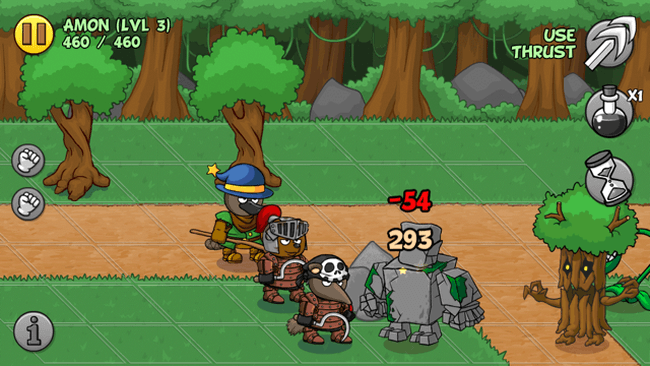 It’s already common knowledge that most of Disney’s feature films – Sleeping Beauty, The Little Mermaid, et al – are highly sanitized versions of fairytales penned by the likes of Hans Christian Andersen and the appropriately-named Brothers Grimm. Fading Fairytales is a turn-based strategy RPG that recalls the darker days of our favorite stories. The title’s setting and character designs are a lot of fun, but the gameplay tells a slow, familiar story.

Trouble has come to the land of fairytales. Darkness has settled over the storybook worlds, and old-time heroes like Robin Hood and Pinocchio have turned bad as a result. Three heroes pledge to save their home: Amon the anteater, Middle the bear, and Natadak the platypus (“not a duck” – get it?). Luckily, Gepetto has cobbled together a machine that frees the heroes from the darkness, but in order to get the heroes to take their medicine, you need to take down their henchmen first. 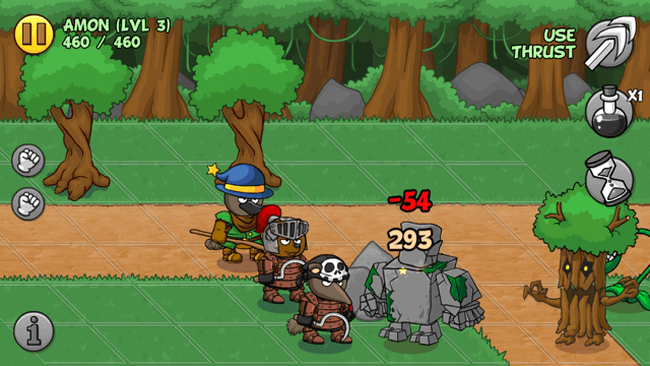 And oh, there are henchmen. Tons and tons of henchmen. Battle after battle is thrown at you, and each one is as lively as Snow White was after she went on her poisoned apple binge.  If you’ve played a mobile turn-based RPG, then you already have a good idea of what to expect from Fading Fairytales. You and your opponents take turns moving across a battlefield. When you get close to one another, an exchange of blows ensues. There are also characters capable of delivering long-range attacks, and others that can heal allies or mess up the enemies’ stats. The battle ends when one side has been annihilated.

To its credit, Fading Fairytales adds a “delay” bar, which is an intriguing idea. The order in which on-screen characters attack one another depends on his or her “delay.” A character wielding a powerful weapon suffers more delay, and therefore attacks less often than a character equipped with a lighter weapon. A bar at the bottom of the screen shows the order in which the enemies and good guys launch their attacks.

Most characters in Fading Fairytales get two turns with each move, another spot of innovation. Unfortunately, even these two-turn moves aren’t enough to keep the game from dragging. The slow and repetitive battle animations are part of the problem; though the character designs are cute and compelling (bears, pandas, foxes, Little Red Riding Hood dual-wielding blades), their movements are unconvincing. 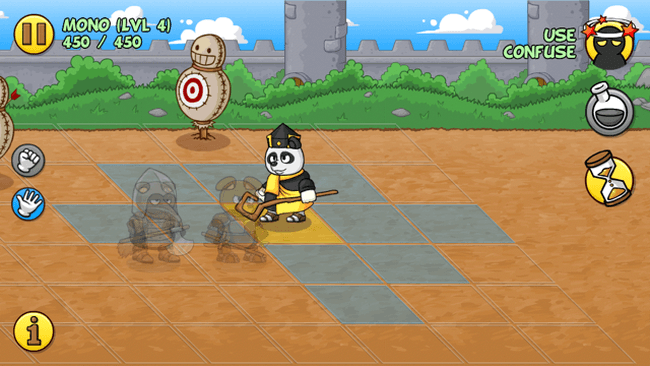 Moreover, building up your characters in Fading Fairytales is pretty tough. Though some weapons and armor can be bought with the in-game currency (gold), the prices are pretty high, and you don’t always win gold from your battles. The game’s hard currency, storybook pages, is difficult to come by unless you cave and buy some via in-app purchases. Buying pages is likely the only way you’re going to gain access to Fading Fairytales‘ cooler warriors, like a kunoichi fox wielding double katanas.

Fading Fairytales is cute, and it offers a compelling story. If you don’t mind an otherwise typical turn-based strategy game that takes its time, you could do worse than visit this storybook world.