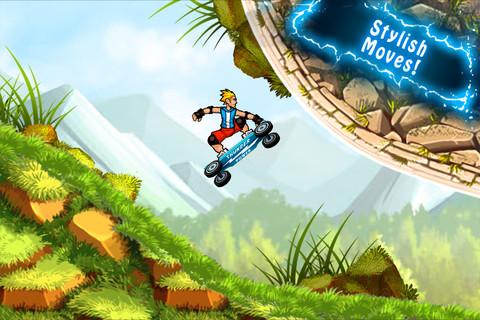 Extreme skater is a few “gnarlies” short of a “radical”

Ready for a game where you skateboard your way through dangerous locales gathering pieces of a fallen meteorite so you can harness its power for… something? Jump over spikes, grind dinosaur bones, and skate through warehouses. Extreme Skater doesn’t seem to try and make any of that makes sense, instead focusing on the tilt and trick controls to provide a compelling experience. Do they stick the landing, or crash and burn?

Extreme Skater boasts just about 80 levels to play through. This initially sounds like a lot, but sadly the locale only changes twice. You’ll spend your time skating through jungle and urban areas. I’d like to tell you thematically why you’re doing this, but the “Intro” button on the title screen crashes the app as of this writing so I’m sort of in the dark about the whole meteor-collecting thing. While at first the jungle you start the game in is a little funny and weird, before long you’ll be wishing for the quickest way to go somewhere else.

The skater on the board isn’t under any sort of direct control of the player. Tilting your device will tilt the skater & board, but the actual rider doesn’t lean or move to make it look right. The character sort of bobs around like a ragdoll of sorts, even more so when the rider bumps on the ground or wipes out. It reminds me of one of the marionettes from the Team America movie. It doesn’t affect gameplay in any way, but it’s sort of disconcerting and doesn’t make me feel like I’m actually controlling him.

Curiously, I was both impressed and dismayed at the tilt controls that make up the lion’s share of Extreme Skater‘s gameplay. Described simply, you tilt left and right to make the skater rotate, and can use this to both balance the skater so he lands properly, and to do flips in the air.

On the plus side, the tilting felt precise, and minor movements were accurately represented on screen. On the down side, you need to tilt the device a good amount before it first seems to be recognized, causing you to make big swings before making the more precise movements. It’s a strange feeling and it’s really off-putting until you get used to it.

Coins you earn from playing through the levels can be used to buy things like new riders, boards, and tricks. Since the riders and boards seem entirely cosmetic, I spent my coin on new tricks. Good thing ,too, since the new tricks offer up a perfect way to expand the gameplay in Extreme Skater. I wish you could unlock them quicker to be perfectly honest, since pulling off these extra moves is the most interesting part of the game. 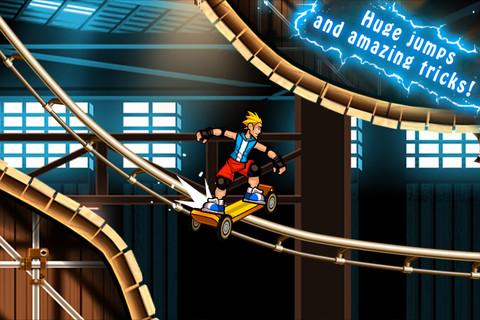 The feeling I kept coming back to while I played it was just that I was a bit bored by the whole thing. There’s barely any variety between the, so it all just feels like the same thing over and over. I couldn’t clearly describe to you the differences between most of them. A jump here, some coins there, rinse and repeat. Sometimes you grab on ropes or hit boosts. It’s also very easy, with the game almost always slowing you down right before any difficult jump or obstacle.

There’s nothing inherently wrong with the game, but there was really nothing that made it stand out either. I’m starting to think the worst thing you can be in the crowded app store is “meh”, and unfortunately, that’s really what Extreme Skater is. While there’s no reason to tell you not to check out the game, there’s really no reason for me to tell you should either.