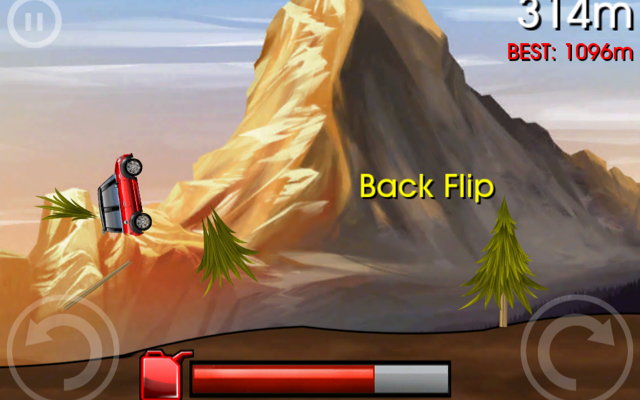 Simple 20 second time killers are a dime a dozen on the iPhone these days – but ones that stand out are getting rarer and rarer. Extreme Road Trip may not technically break any new ground, but there’s something wonderfully addictive about the familiar physics-based fun of Road Trip that makes it impossible to put down.

Seated behind the wheel of a car with a stuck gas pedal, players will try to travel as far as they can before their tank runs out of gas, or worse yet, they crash. Like most off-road adventures, the path is filled with peaks and valleys that will send your car hurtling into the sky. You’ll need to keep your wheels aligned with the ground if you want to make a safe landing – but there’s always room to try and pull of a few tricks on your way to the ground, too.

Such is the case with Extreme Road Trip. Equal parts Joe Danger and Tiny Wings, players are tasked with the challenge of pulling off stunts in mid-air to charge their nitro meter. This in turn allows their car to get a necessary boost while simultaneously giving the gas tank a break, extending the possible distance you can achieve.

Tricks themselves are easy enough to pull off – you’ll simply tilt your car left and right using on-screen buttons to do simple things like front flips and back flips or wheelies, but trying to chain these tricks together to earn more boost can become a risky proposition. Just how many flips can you do and still land safely given your surroundings? And can you time it just right so that you’ll land on a decline and pick up speed for that next jump, just like in Tiny Wings?

The controls may be simple, but they’re also smooth and responsive – exactly what you’ll need in a game that’s all about finding the perfect angle to land on all four tires at once. As a freemium app, players will be able to ride around in one car at no cost, with additional vehicles available as in-app purchases. The developers have wisely included four cars that require a real world purchase, but a fifth that can be unlocked for free by simply liking the game’s Facebook page. It’s just enough to show players that, yes, the different cars do handle differently, so you can easily justify your purchase of the four remaining cars. 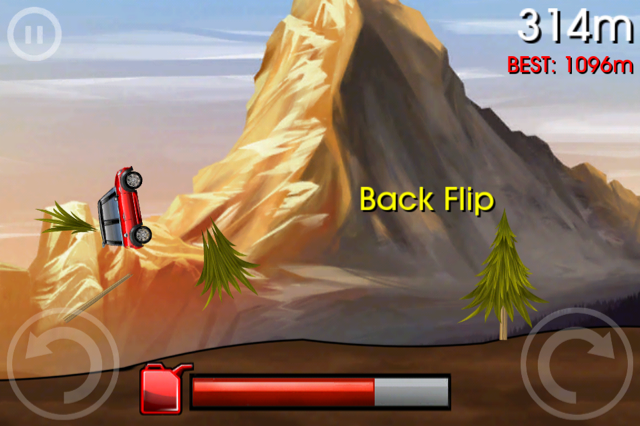 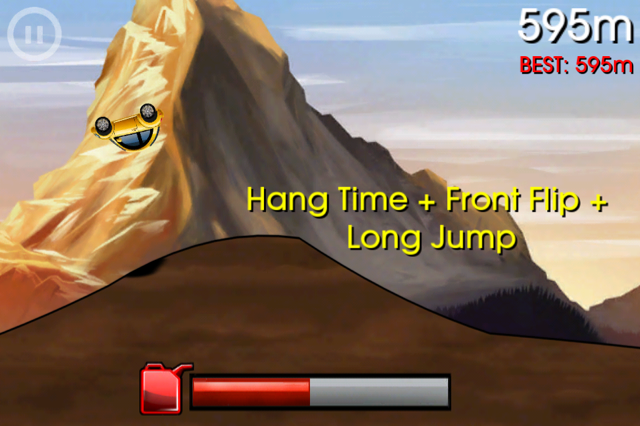 Visually the game is fairly ho-hum, but the music – an original 8-bit score by Magnus Pålsson, the composer behind Terry Cavanaugh’s brilliant VVVVVV – makes this app worth a download under any circumstances. It sounds like a lost track from the early days of Mega Man. If you’re a fan of 8-bit music, it’s downright exquisite.

Is Extreme Road Trip a fairly simple offering? Sure. Kind of a one trick pony? Probably. But the one trick Extreme Road Trip pulls off is an incredibly satisfying one. I suppose it would have been nice to see a greater selection of environments, or an option to control the game via tilting – but in the end, Extreme Road Trip is exactly what it needed to be – a game that’s simple to pick up but impossible to put down.