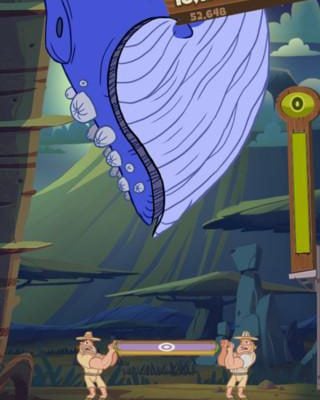 This is what it sounds like, when dodos cry

I’ve yet to encounter a developer on the App Store who gets humor the way [adult swim] does. Their willingness to take crazy concepts and run with them – sometimes literally – is something I can’t praise enough. Extinction Squad, arguably their most ridiculous game yet, finds the studio venturing even further down the proverbial rabbit hole. Is there no end to this (wonderful) madness?

Extinction Squad wastes no time getting awesome, kicking things off with a story about father of evolution “Chuck Darwin.” Darwin has uncovered a group of living dodos, which at first seems like a scientist’s dream come true. Unfortunately, Darwin and co. are quick to learn that the scent of dodos inspires other animals to try and jump to their death. Taking responsibility, Darwin hires a crew to stand below the jumping animals and bounce them to safety with a trampoline.

Has a story ever made more sense?

The game starts out easy enough. A couple dodos leaping through the air, the occasional lion descending from the sky. But things ramp up quick, with animals dropping en masse. Casualties become inevitable, as you travel to areas like Asia, Antarctica, Africa (holy alliteration!) and more. Progression is linked not only to how many animals you save, but how many coins you pick up in the process. While a steady stream of them fall from the sky, the real fortunes lie in the game’s “Wild Wheel.” Each spin costs 50 coins, but provides you the chance to earn – along with power-ups – even more coinage. 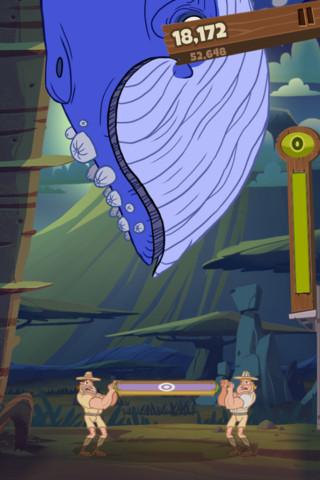 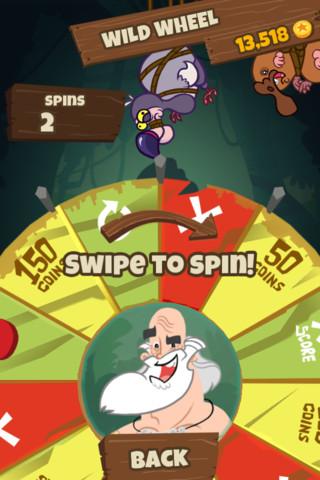 Extinction Squad is also home to meta-goals beyond just rescuing animals, such as spinning the Wild Wheel three times or playing a round for two minutes. It added a lot of longevity to the experience, and inspired me to play the game in different ways. For a game so reliant on a single mechanic, I consider that to be a crucial addition.

Movement is mapped to swiping your finger across the screen, a decision that provides both benefits and problems. It works very well for the most part, but I occasionally found my finger in the way of the action, causing a lion or two to lose a battle against gravity. It’s easily corrected by a quick fix in finger placement, but it can make things extra stressful in a game where reacting quickly is crucial. Especially when bombs are dropping alongside the animals, and contact with one can result in a game over. Stupid bombs…

Every round in the game breaks down into bite-sized excursions to various locations. The game will continually loop between the locations you currently have unlocked, increasing the amount of animals you’re expected to save. Going back and forth between the same few areas felt a little tedious at first, but things improved as I earned the coins needed to unlock new ones.

Much of Extinction Squad‘s charm lies in its absurdity and sense of humor, which isn’t to say there’s not a lot to love about the gameplay. Minor control issues aside, it successfully walks the fine line between being playable in quick bursts and being fun enough to play for much longer than that. It’s another great game from the likes of [adult swim], a developer I trust more with each release.