Explorers of the Lost World Review 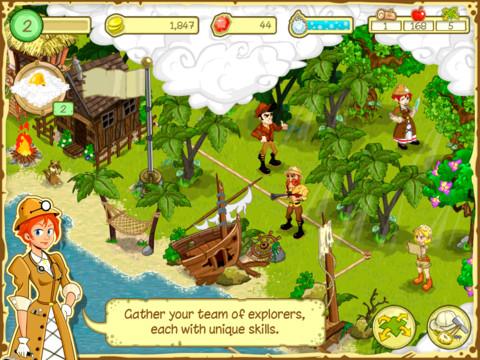 Get lost in a bright and colorful world

Have you ever wanted to get lost on your own tropical island? Well, here is your chance: Explorers of the Lost World puts players in control of Professor Jack Blaine, as he is shipwrecked on the coast of a large and vibrant island. From Beeline, the developer behind the hugely popular Smurfs’ Village, Explorers of the Lost World offers a bright and colorful adventure, but one that puts a price on its exploration aspects.

The biggest strengths of Explorers of the Lost World are in the game’s pristine cartoony visuals and fluid controls. Everything looks so crisp on the island, and I was amazed at how close I could zoom in without sacrificing the picture’s clarity. There is also a highly addictive quality to exploring the island. The game world is divided on a grid of square areas, with the unexplored sections shrouded in mysterious clouds. Sometimes you can see parts of objects poking up through the clouds, and the anticipation of what these objects could be is one of the most enticing qualities of Explorers of the Lost World: it really makes you feel like an explorer. The touch controls are also top-notch, and it feels great tapping on all the apples and coins that your island generates, or chopping down trees to clear away your land.

There’s no deeper story to be found here, and quest objectives are all nice, lighthearted fun. The game uses a bizarre, turn-based strategy system for each of its quests, that both looks and feels like a watered-down version of a handheld Pokemon title. In each scenario, your explorer is pitted up against some kind of obstacle or opponent, where you must choose from three different “attack” options in order to emerge victorious: weak, normal, and super. Of course, the normal and super attacks cost precious coins and red gems, so be prepared to lose several times on each “battle” round. After each attack, the game will randomly decide if you or your opponent will take a hit to their health bar, regardless of which option you choose. This fighting setup doesn’t always make sense, especially when your objective is something like removing a thorn from an injured lion’s side, and it lacks any variation to the system as more instances of it begin to appear.

Unfortunately, Explorers of the Lost World is built around a very unforgiving free-to-play model that greatly limits the average gamer’s playing potential. At one point early on in the game, the only quest I was left with was to build a Canoe Maker’s Shack. However, the hut cost 15 red gems to build for no reason, which is the game’s highest form of currency. I started the game with maybe 20 red gems, and only acquired 1 or 2 throughout my entire session. The quest description may have well just read: “Pay $5 to finish this quest.” This was only in the first few hours of gameplay, and considering how all of the requirements seem to double to unnecessary proportions every time you accomplish something, I can’t even imagine how much actual money it will cost gamers to complete later tasks.

There are several other factors employed in the game that prevent you from actually being able to play it. Each time you want to explore a new location, you’ll need more coins than last time, more apples than last time, and have to wait more minutes than last time to uncover that next tiny square of land. The more huts and amenities you build, the more coins your village will generate over time, but there’s still an uneven correlation between the coins you need and the coins you earn. Of course, you can only get to this point of frustration if you still have enough energy left to get your explorers to do something. Nearly every little action in the game will drain your energy bar, from chopping down a tree to constructing a building, and you’ll find yourself at a standstill very fast. 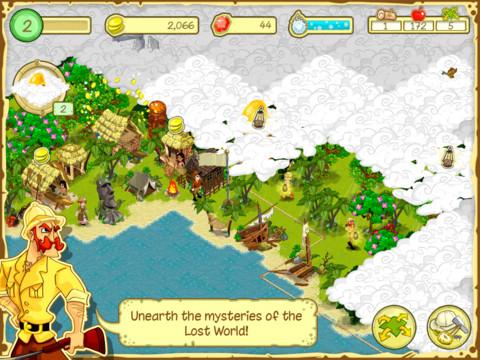 Many of the quests further require your characters to be at a certain level to even attempt. However, the game gives you so few of these actual quests in the beginning of your journey, that it leaves you with virtually no means of leveling up your explorers. The quests they do decide to give you have such lofty currency requirements that it’s almost impossible to advance in the game without shelling out more dollars. It’s a shame, as I really did want to see what secrets the rest of the island had to offer, but I don’t have hundreds of dollars I can spend to find out.

As a social game on a mobile platform, Explorers of the Lost World plays great, and it looks even better. The tropical setting is extremely well-envisioned, and the allure of expanding your territory is an addictively fun gameplay mechanic. But instead of giving players free reign to explore the vibrant island to their heart’s content, the game is primarily designed to drain your bank account: with the bonus perks of the freemium model now transformed into basic progression requirements.