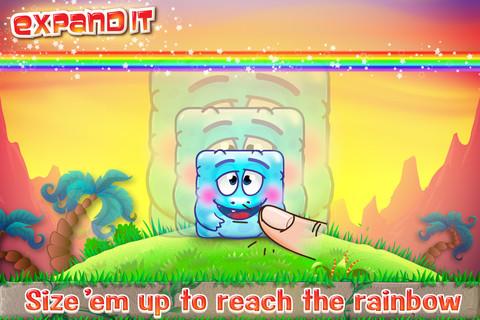 A nice expansion to an over-inflated genre

The Skittles candy has promised the same thing for nearly half a century: the ability to taste the rainbow. And while this modern rainbow treat is indeed tasty today, it seems the Jurassic era dinosaurs were able to harness the good stuff by absorbing rainbows directly into their skin. Also, dinosaurs could inflate up to several times their size. At this point, just throw away your history book.

FDG’s Expand it! might be one of the most bizarre premises for a game I’ve seen in a long time, but it’s nonsensical approach actually leads to a fun and unique physics puzzle experience.

All ridiculous pretenses aside, Expand it! is actually pretty simple. Dinosaurs appear in assorted geometric shapes, and can expand up to five times with multiple taps. By bringing just a single dinosaur in contact with a horizontal rainbow on the top of the screen, every dino will complete the stage in pure bliss.

Several early levels are straightforward, but Expand it! shines when puzzles evolve in complex ways. Your dinos will pop when they touch sharp objects. Sometimes this is something to avoid, while other times a dino will have to take one for the team in order to progress. Some stages require you to expand multiple shapes at a time, while others require precision timing. Many puzzles require the usage of rolling, gravity, and weight mechanics.

It’s hard to explain how complicated things can get toward the end, but here’s a great example: in one later stage, you have two sets of rotating dino circles that form moving carts. The bottom cart pushes a block that you must expand in order to raise another block, while the top cart must impale that block in order to clear a path for another circle to reach the rainbow. It sounds ridiculous, but puzzles like these become second-nature fairly quickly.

The game starts you off with three “super rainbow” power-ups if you ever want to skip a level. Extra super rainbows are available for purchase, but honestly, I recommend never touching them. Each stage only takes around 10 to 20 seconds once you know the solution, making almost every stage solvable through non-frustrating trial and error.

Unfortunately, these same quick solutions become one of Expand it‘s greatest weaknesses. 60 stages is about the standard for most physics puzzlers, but the game’s fast-paced completion times had me completely done with every stage in a little over an hour. It was a fun hour, but I had about 90% of everything with three stars, and had little reason to replay through most of the levels. 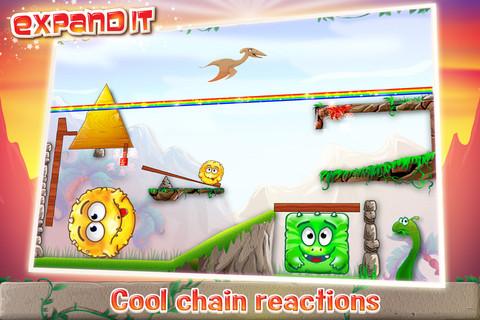 My only other issue is one that seems to follow every physics puzzler app: the physics are occasionally “off”. Some stages can be completed fairly early due to some wonky movement after expanding a shape near the top of the screen, and other times a shape will get caught at an awkward angle and “pop” on its own. It never becomes a deal breaker due to the game’s quick pace, but the lack of polish can be a little off putting at times.

The classic “60 stages, more stages coming soon, three stars per level based on performace” physics puzzler app is definitely growing stale, but that doesn’t keep Expand it‘s unique mechanics from being fun. To its favor, my largest issue is simply that the game is surprisingly short: just like the rainbow-hungry dinosaurs, I just wanted a little more.