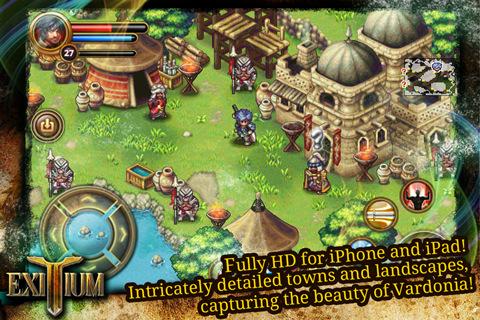 A sprawling old school action RPG with a dash of mediocrity

I really wanted to like Exitium: Saviors of Vardonia when I first started it up. The title promised to be an amazing, huge, and fast-paced action RPG straight out of the 16-Bit era of video games. After spending some time playing the game, I can guarantee that the game manages to deliver on two-out-of-three of those promises, but it’s not so much “amazing” as it is “so-so.”

On the surface, the story is pretty simple: on the world of Vardonia, the countries of Arkan and Abylon are at war. However, things aren’t as simple as they seem and there’s a bunch of stuff going on behind the scenes. As a result, players follow the adventures of four different characters who are caught up in different aspects of the conflict. Each of them has a unique perspective of what’s going on, thanks in large part to how their different character classes place them between the warring countries.

The game’s major strength is just how big its scope is. The story here goes beyond characters and their motivations; instead, it uses them to tell the story of a massive war from four perspectives on two different sides. The only way to truly learn the truth about the entire conflict is to play through the game with each character. On top of that, the world is just massive, and there’s a lot of territory to explore just by wandering around the different maps.

The actual gameplay itself is a bit mediocre. The interface is pretty standard of most top-down RPGs, with a virtual D-pad and various buttons/slots for different items and abilities. That said, fighting is a little easier said than done, since attacks will move a player-character forward a bit and the attacks don’t automatically target adjacent enemies; in order to hit a character, players have to be directly facing them.

Not only that, but movement is a bit of a hassle because the characters only seem able to move in straight lines. This takes a little while to get used to, but it never actually feels smooth or natural. Finally, a lot of the missions feel pretty underwhelming as they largely consist of “Go here, kill this many enemies, collect this many items, and then return to me before I give you something else to do” types of quests.

In terms of style, things here too are a bit mixed. Visually, the game is pretty striking. Story scenes are delivered via (lovely) painted portraits that occasionally change poses to match the text that runs beneath them. The overall game is presented via a high-quality, top-down perspective that essentially looks pretty solid, though some details are lost if played on the iPhone’s smaller screen instead of the iPad. Additionally, characters are animated pretty smoothly. 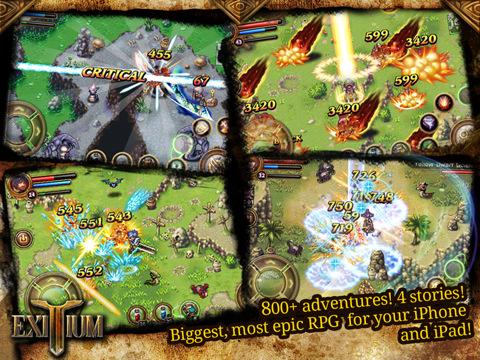 The audio, meanwhile, is a little weird. The sound effects are fine in general, but the soundtrack seems like it came from an 80s rock album. Needless to say, this is more than a little strange to listen to, especially when running around a fantasy landscape.

The biggest problem with this game is that there isn’t really anything here that hasn’t been seen before. Not only that, but when these various features have appeared in other games, they’ve often been better done.

That said, Exitium: Saviors of Vardonia is one of those games that is far from bad. It just never manages to rise above being pleasantly mediocre. If, however, you’re a massive fan of old-school action RPGs, there is still an interesting story here with a ton of content to check out. Needless to say, there’s a lot worse for sale in the App Store, but there’s a lot better out there, too.