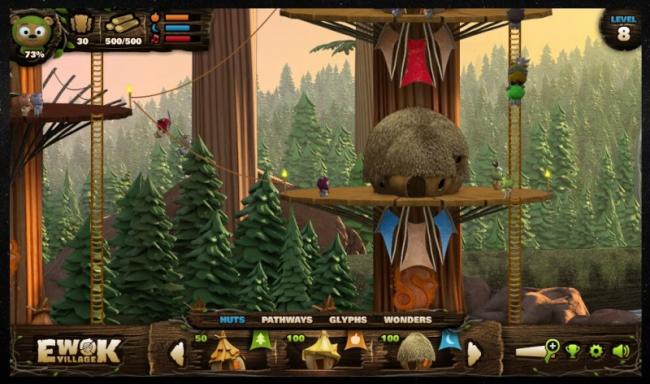 Ewok Village is a simple game, but it outranks the ’80s Ewoks cartoon by a long shot.

The Ewok race is generally not celebrated as one of George Lucas’s greatest creative triumphs. People squirmed uncomfortably when the sentient teddy bears smacked down the Empire in Return of the Jedi, and they began to fear something was wrong with Lucas’s alien-making machine. Lucas verified as much some years later with the debut of the Gungan species in Phantom Menace.

The Ewoks have their uses, though. They’re cute, they look and act like vicious Pomeranians, and their tree-top society forms an interesting backbone for a social city-building game.

Ewok Village delivers what it promises: A chance to build and nurture your very own city for the little guys. As the new tribal leader, you must observe what the Ewoks want, and build up their new home accordingly. That includes building places for them to eat, sleep, and play (Ewoks just wanna have fun).

Whereas most building games require you to expand outwards, in Ewok Village, you expand outwards and upwards. The tall trees of Endor serve as your foundation, and from there, you assemble platforms that hold sleeping quarters, dining areas, and theatres. As Ewoks move into your village and you level up, you gain opportunities to build “Wonders,” large-scale projects that grant you the opportunity to expand your territory.

Ultimately, your goal in Ewok Village is to keep everyone happy, which encourages other Ewoks to move in. As you play, the game provides you with a round percentage of Happy Ewoks, a number that tends to fluctuate. You level up as more Ewoks move in, but leveling up can be a slow process because sometimes it’s hard to tell what the little buggers want. Your Ewoks’ happiness tends to swing wildly even if you maintain a balance on food, shelter, and fun, and ensure that every building is equipped with bridges and ziplines for easy transportation. There are “Glyphs” that you can put on your village’s tree trunks to make your brood happier, but your numbers still don’t make a lot of sense at the end of it all.

As a consequence, Ewok Village is fun to play for a while, but it gradually becomes dull—even frustrating. There isn’t a lot of content to aspire towards, though it is a nice change to build a city in the treetops instead of eking out yet another digital existence on the ground.

Ewok Village is also a fast-paced game. You’re not forced to wait for hours on end while buildings are assembled. Your huts are ready to go within seconds, and Ewoks occupy the new structure immediately. The only currency you need to worry about is wood, which is acquired through sawmills and replenishes on its own.

Star Wars fans that don’t utterly hate the Ewoks might even take a little joy in the game’s rich sound. The Ewoks sing, play, and converse. The game’s visuals are fine too, though the Ewoks themselves look like they’ve come directly out of a South Park character creator.

There isn’t a lot to do in Ewok Village, but dedicated Star Wars fans might get a kick out of it. Younger fans will definitely love it. Playing the game is certainly more fun than burning your father on a funeral pyre.