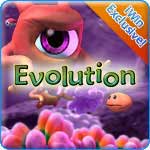 It’s better to be a big fish in a small pond than vice versa – believe us, we know after playing Evolution. An undersea arcade game that challenges you to chomp your way up the food chain, the title taps simple Darwinian principles to ensure only those with the quickest reflexes survive.

The quest starts out fairly simply at the protozoan level, as you play a blob of Play-Doh-esque cells with giant eyes and an even bigger mouth. One’s goal at this point is simply to move about the screen (which scrolls either way horizontally) by waggling the mouse and stuffing as many sperm-like plankton into your trap as possible while avoiding lethal, one-eyed predators.

Fill a food bar, and you’ll then be able to give chase, as the hunter becomes the hunted in secondary sequences that see you munching on former enemies, attempting to top out the gauge once again. Afterwards, it’s off to mate with cute little females you go, with challenges here taking place on a single screen as you dodge foes and gobble down specific types of girl-pleasing chow. (Each lady has her own preferred food source, and ingesting anything else causes you to lose hearts that otherwise fill on a love meter when the correct critter is consumed.) Enjoy true romance by binging on the right type of cuisine until that scaly little minx is yours, and eggs will naturally be laid.

Following sequences involve swimming around, blocking invading beasts from swiping these eggs and the babies which eventually hatch (and sometimes must be shepherded back to the nest) with a quick, enemy-repelling headbutt. Successfully pass these challenges, and you’ll engage in a bonus round, as swarms of hungry fish give chase. Collect all the babies and snarf down any nearby point-yielding victims and you’ll move on to the next feeding ground both content and rocking a higher score. The cycle then repeats itself several times over as you progress into the open ocean and grow from an indefinable mass into a higher creature with fins, spines, scales, a tail and streaks of fabulous color.

If the experience sounds strange, that’s because it’s all a bit surreal: It’s not often we come across a concept so bizarre. Nonetheless, the control scheme is sound, interface couldn’t be simpler and premise proves intriguing enough to keep you happily waggling away. Later stages further introduce a host of new foes from crusty crabs to evil-eyed octopi, spiny anemone and giant sharks, as well as special powers you can access. (To do so, just let a power bar fill over time, then left-click to enjoy a temporary speed burst, scare adversaries away, shock targets, etc.)

In addition, featured scenarios are addictive in a “just one more go” sort of way, as survival comes down to pure speed/skill, and you can’t help but wonder what evolutionary twist comes next. With only 35 stages, it shouldn’t take long for you to plow through the search for dry land either, and performance-enhancing power-ups from invisibility-bestowing bonuses to point multipliers do aid in the adventure.

Regardless, as much as we dig the whimsical soundtrack and cartoonish visuals (everything’s googly-eyed, garishly-colored or rendered for maximum kid-friendly appeal), there are several downsides to the game too. Besides being short, it’s also designed in such a way that you have to move close to the edge of the screen to make landscapes scroll, with death often resulting more from pure surprise or dumb luck than failure to perform on the player’s part. Special abilities and power-ups don’t really affect the action all that much to boot. The continuous cycle of similar challenges (really just a collection of like-minded mini-games) barely remains fresh and interesting over time. And, most annoyingly, completing certain levels can seriously try your patience, with gamers forced to chase low point-yielding schools of squid or fish, slowly collecting food in small increments, only to die and lose any previous meter-building progress.

Be that as it may, there’s still plenty to like about Evolution – as long, that is, as you have a responsive mouse to play along with. Consider the title officially stamped with our seal of approval, as we’re 100% certain it’s sure to make a splash with casual gamers young and old…