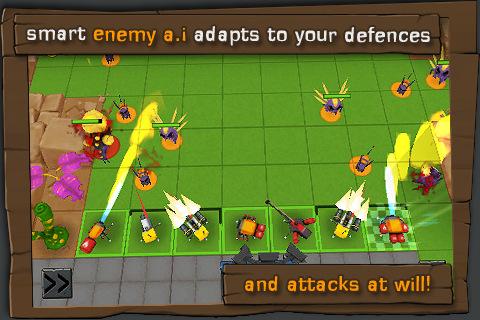 Hello, Disposable Worker #42, and thank you for joining humanity’s new energy harvesting operation on Evil Angry Planet. As you’ve probably guessed, your new work assignment is a bit on the dangerous side, so your paycheck will be adjusted to include regular amounts of hazard pay based on how many aliens you have to fend off while you oversee our latest mining operation. Please do your best to survive for at least a week, as the office pool is providing a payout to all of us who bet that you’d last at least that long.

The basic premise of Evil Angry Planet is about how humanity, in its ever-expanding quest for crazy energy sources, finds a remote planet that contains a type of gas that can be processed into an incredibly effective type of fuel. However, the inhabitants of the planet – which look like a cross between Robert Heinlein’s Bugs and characters from Day of the Tentacle – don’t take kindly to the interlopers, and would rather turn the human mining operations into so much scrap metal.

Evil Angry Planet is technically a tower defense game, but it’s pretty different from any other title in that genre thanks to the real time strategy elements that are present. Each map is divided up into a grid, and players can place towers on any square. Meanwhile, there aren’t any predetermined paths for monsters to take, which means that their routes can change at any moment and players have to be ready to adjust their defensive strategies, especially on larger maps (and when players choose higher difficulty levels).

Enemies will rush at players in unending waves, which is actually a neat feature because it means repairs and upgrades have to be made on the fly as opposed to waiting for lulls in the action to do so. However, on the easier settings, things eventually get boring when players are able to permanently hold the aliens off, which will mean that it’s time to end the game and start a new one with a bit more of a challenge.

At the moment, there are five different maps of varying size and layout. Meanwhile, there are six types of enemies (also of varying size), and certain turrets have specific strengths and weaknesses against the various monsters. As more resources are collected, players can upgrade their towers, eventually giving them an “explosive special” that does extra damage. 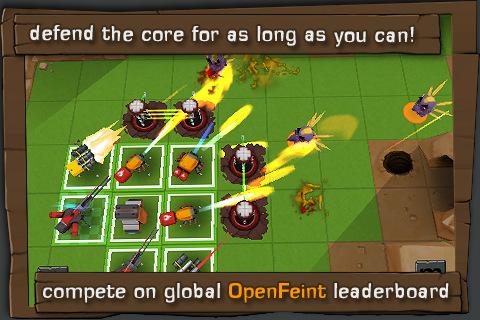 The game’s got a pretty unique – and great – visual style. The graphics are fully 3D, with bright colors and a wonderfully goofy retro style. The towers all look like they were pulled out of a sci-fi comic from the 1950s. The monsters, meanwhile, have a great cartoony look to them. Honestly, it feels like this game is what Starship Troopers would have looked like if William Joyce had designed it. The audio is solid, too, with a nice set of background music and some appropriate sound effects.

For the moment, Evil Angry Planet is a fun, stylish defense game that any fan of the genre should embrace with open arms. Meanwhile, Irate Games has promised that there’s more content coming in the future via free updates and DLC. This is one of those titles that is pretty much impossible to not recommend, so go ahead and pick it up already.