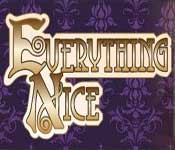 Fed up with factories that only produce violent and military toys, Abby finds herself running a factory that makes "nice" toys and goodies with the help of the mysterious Wondermachine9000 in Everything Nice, a new time management game from Namco Networks and Mean Hamster Software.

The Wondermachine9000 is what makes it possible for Abby’s factory to be a one-woman production. All she has to do is collect the raw materials – like fluff, velvet, sugar and wax – from the factory floor, pop them onto the conveyor belt, and press a button, and the machine turns them into a toy or tasty treat.

Each toy has its own recipe that must be followed perfectly for the toy to turn out properly. To make a teddy bear, for example, you need 1 fluff, 1 velvet, and 1 button; rock candy is made with 3 sugars and 1 fruit, and wax lips require 2 sugars and 2 wax.

The finished toy then has to be packaged, which involves setting a box down on the packing table, dragging the toy over to the box to place it inside, then dragging packing tape onto the box to seal it, and finally dragging the box itself onto the shipping pallet so that it can be loaded onto the truck.

Each customer’s order is represented by a toy slowly travelling across a conveyor belt. If the toy reaches the end of the conveyor belt and falls off before you fill the order, then you’ve lost it. Completing the order earns you cash that goes towards fulfilling a certain minimum daily goal in order to be able to continue to the next level.

Gameplay is a combination of clicking directly on items to make Abby interact with them, and dragging items from one place to another – such as toys into boxes. It makes for a hectic pace where multi-tasking and planning ahead becomes key: while Abby is making the raw materials for the next toy, for example, you could be setting out new boxes or dragging a finished toy out of the machine.

In between levels, you can purchase upgrades for the shop, such as speed boosts for Abby, packing peanuts and fairy dust that add money to an order, and the ability for Abby to carry more than two items at a time. A few of the upgrades are purely aesthetic, like better floors, and don’t impact the gameplay at all.

The gameplay of Everything Nice is such that it can be played using many different strategies, and it’s up to the player to find out what works best for them. This keeps the game from getting monotonous, since players can never really fall into a pattern of repetitive clicking because they’ll always have to be thinking on the fly and anticipating what different ingredients they’ll need for the randomly-appearing toys.

By the same token, the game can seem overwhelming at times, and isn’t necessarily recommended for players who aren’t "fast clickers." The clickable areas can be small, and quite often I had trouble getting objects I was dragging to go where I wanted them too. The whole box packing part of the game felt a bit cumbersome, and I found myself wishing that I could just click on a box to package it up instead of having to actually drag a piece of packing tape over it.

As well, there are more than 35 different recipes in the game and it can be hard to keep all of them straight. Unless you’re prepared to do some memorization, you’ll have to click on each item as it’s coming down the conveyor belt to remind yourself of what ingredients you need to produce. In the heat of the game, when you have three or four other tasks on the go, it definitely adds to the stress to also be thinking "Ok, now what was the difference between the stuffed hamster, stuffed rabbit, teddy bear, and giant teddy bear again?" The machines that produce each ingredient could have been more clearly marked as well to be more easily identifiable in the heat of the moment.

Mercifully, there are power-ups you can buy later on that automate some tasks and allow you to pause the conveyor belt temporarily to take a little breather.

Messes will appear on the floor from time to time in the form oftoys that didn’t turn out quite right. You’re supposed to drag these into the recycling bin, but often so many messes would start to appear that it’s impossible to keep up with them. I took to ignoring them, and it didn’t seem to impact my ability to pass the levels.

Overall, Everything Nice seems like the kind of game that was designed for players who already have a couple of time management games under their belts. Its hectic and challenging pace will definitely appeal to the speed junkies, and at 48 levels and two modes of play (Story, and Endless Day) it’s a decent length. With decent production values and a cute premise, it’s definitely worth downloading the free trial to see if the gameplay suits your tastes.