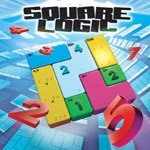 Not often does a game come along where the first adjective you can think of is "sublime." We’ve played many number/logic games, but few are as addictive or thoughtful as TrueThought’s Everyday Genius: Square Logic. This game was so good, it literally infected our dreams after a night of playing it.

The basic premise of Everyday Genius: Square Logic is like Sudoku, where you fill in grids ranging in size from 4×4 to 9×9 with numbers that cannot repeat in the same row or column. The possible numbers (called candidates) appear in each box, and are eliminated by either solving another box in the same row or column, or right-clicking it because simply cannot be part of the correct answer. However, that is where the similarity ends.

Rather than simply working by process of elimination, Everyday Genius: Square Logic links boxes together (called Cages) using different relationships between them. Sometimes the boxes are part of a mathematical equation (for instance, two boxes beside each other, when multiplied, equal 12), or perhaps they are to be compared (one box’s value is greater than the box beside it). Cages are mostly denoted by like colors, although later on, you’ll sometimes have to intuit the relationships.

What’s amazing here is how compelling finding the relationships is. In later levels, there are often almost entire boards filled with greater- or less-than symbols, and after some time, you can follow the trail of numbers like breadcrumbs. Other times, you can simply know how the configuration of an answer will appear simply because the answer can only be done with two of the same number (such as 3×3=9, but they can’t be in the same row or column). It’s incredibly addictive and satisfying.

One of the more unique challenges Everyday Genius: Square Logic presents is the Dual Board system. You are presented with two different grids, but the solutions for both will be identical; the only changes between the two boards are the cages and clues. If you’re stuck on one board, look to the other, and you can continue your progress. It’s quite ingenious.

Each of the game’s stages is divided into areas ranging from the ocean to the sky and beyond. Each new level presents a new element of challenge, and you can keep playing different boards until you feel you understand the new elements. You then select the Challenge Board, which is the test to see if you truly do get it. Succeed, and the next set of levels will open up to you.

Your jaw will drop when you see how many boards are opened up by beating the challenge levels. Each area can have almost 800 boards! Although we were sure it was a mistake, there really are that many boards. In fact, the game has over 20,000 (yes, that’s twenty thousand) boards.

The degree of challenge is beautifully sloped. Early levels have simple 4×4 grids, and each subsequent stage and level introduces new elements in bite-sized portions. You’ll grasp using different mathematical equations of greater length and complexity, longer greater- or less-than strings of relationships, and dual boards all the way until you’re solving two 9×9 boards with confidence. While it never is a cakewalk, you’ll never feel stuck.

To help you, Everyday Genius: Square Logic has an easy-to-understand tutorial that guides you into the new challenges. If, however, you get stuck, the game has a very clever hint system that will indicate a cage on the board you should be inspecting. If at first you don’t understand what you should do, the game reminds you of the strategy it taught you in the tutorial without directly giving away the answer. This system allows you to have a sense of accomplishment without the compromise of having your hand held.

Also, to help solve the equations, Everyday Genius: Square Logic will show you all the possible mathematical equations that can be used. Often the possibilities are plenty, but the ones that are still doable given the numbers on the board get fewer and fewer as you solve more of the boxes. The possible equations are listed in green, while impossible ones are turned red as they are eliminated.

The graphics are very pleasant. While most puzzle games use bland, boring blocks of primary colors, Everyday Genius: Square Logic uses a lovely palette of pastels that are easy to discern (no two colors are particularly close, yet they all complement each other). What is more amazing, though, is the ambient soundtrack. The game has a different soundscape that reflects each area you’re in. It sounds almost like white noise, helping you concentrate on the task at hand without interfering with your thinking. It strikes a great balance of being hauntingly beautiful and minimal.

Finally, the game offers extensive stat tracking (i.e. how many levels you solved without a mistake, how many candidates you eliminated) with a long list of unlockable achievements to keep you motivated.

When the only downside a game can present is that it will almost definitely never be completed due to the vast amount of content (again, over 20,000 boards!), you know you have a real winner. Everyday Genius: Square Logic is a phenomenal game, turning the basic premise of Sudoku on its ear. It adds so many variables and dimensions to the point that it’s not even fair to call it Sudoku anymore. Everyday Genius: Square Logic is a serious candidate for best casual game I’ve personally played all year. By all means, if you’re not convinced, download the demo. Sixty minutes will never pass by so quickly.