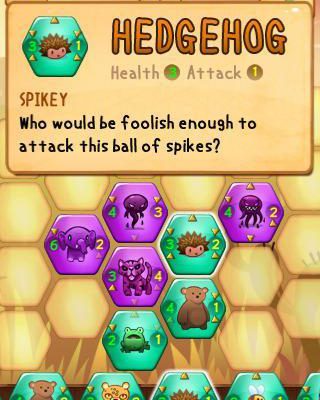 Cute woodland creatures aren’t the first thing that comes to mind when I think of turn-based strategy games, but Everlands is here to change that. I’ve played a fair amount of hex based games, but while they usually involve spinning and moving hexes in order to clear them, in Everlands your hex pieces that represent different animals to attack your opponent. As it turns out, this leads to a fantastically fun game.

Pieces have different animals on them that have different attacks and strengths. Some have low hit points but high damage, while some can attack in many directions at once, yet others can only move in one or two. Different species have special abilities as well, for instance the tiger will lower the hit points of all nearby enemies. If you can wear down the hit points of your opponents piece it flips to your side. Whoever controls the most pieces when the board is all full is the winner. 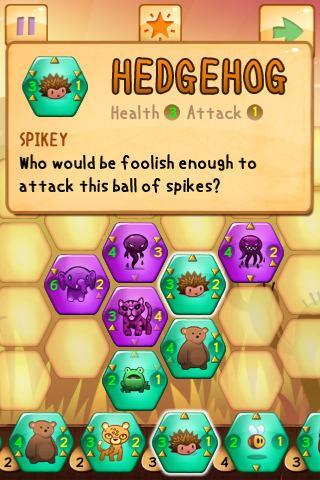 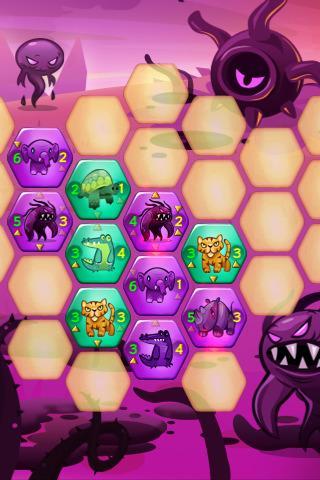 The different animals all feature slightly different abilities, probably the most important being the attack abilities. On each hex piece there are little arrows on various sides (some have more than others). These are the sides that the animal is able to attack on. So putting down a piece with an arrow against your opponents piece means it can attack and deal damage. Likewise if your opponents piece also has an arrow there they will attack you back. You need to try to defend your vulnerable sides (by placing them against friendly pieces) while trying to catch your opponent off guard.

This attack side aspect gives the game the unique spin that I haven’t really seen in other titles. It’s an extra layer to think about in a game where you’re already worrying about hit points and special abilities. Everlands would probably get too simple too fast without the attack sides.

What I really loved about Everlands was just how unique the setup and gameplay were. I’ve played my fair share of turn-based strategy games in the past but nothing along the lines of what I found here. It’s a mix of hex-based puzzlers and miniature war gaming mixed with cute graphics. I know that seems like a stretch, but let me explain. Most of the tabletop war games I’ve played have been on boards or mats with hex shaped spaces, so the layout is instantly familiar. The unique attack and defensive abilities of the different animals to me was reminiscent of different military units. Some are obviously tanks (big and strong) while others need to play other roles (weaker but can attack in more directions for instance). While the games were unfolding I found myself using strategies learned on these tabletop gaming sessions.

I found Everlands to be a near perfect mix of strategy and luck. The attack/defend nature means there’s usually no perfect move to make, which both means options are always available and the game remains tense and interesting throughout. The strategy involved in playing isn’t immediately apparent given the cutesy graphical nature of the game, but I implore you to look past the adorable animal icons. What lies underneath is a fun yet strategic game, and would be well served in your game collection.