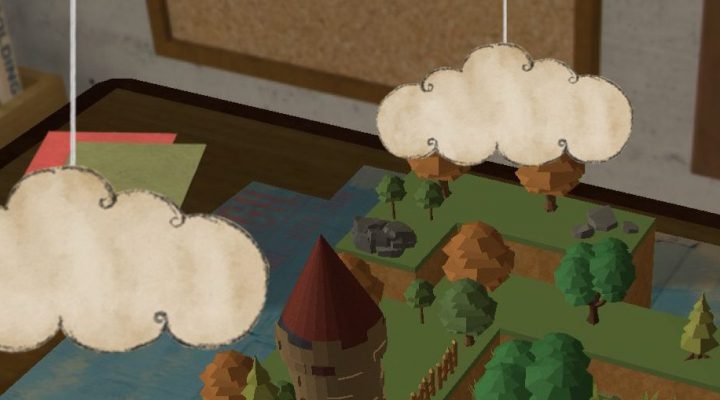 It's deceptively difficult and with that very addicting. You'll feel clever after playing.

Graphics are lovely and nostalgic without being over-the-top. The whole game feels very warm, like being transported back to an idyllic childhood.

The background music can get a little grating over time but if you mute the game your own music playing through another app is muffled.

Game board could be a bit larger in relation to its surroundings to improve visibility.

When indie puzzler Evergrow: Paper Forest was launched recently, its arrival on the App Store caused a considerable amount of confusion. Wasn’t there just a puzzle game called Evergrow released for iOS a couple of months ago? There was, and it’s an unfortunate coincidence. While it’s not possible to say for certain which game is the rightful Evergrow, Evergrow: Paper Forest first appeared as a PC/Mac game on Steam in early 2016.

After Evergrow: Paper Forest was pulled from Steam for reasons unknown in April 2016, developer Unlibox focused on adapting the game for mobile (the original computer game is still available through their website). The result is one of the loveliest isometric puzzle-solving games of recent memory.

The comparatively low-res 3D graphics in Evergrow: Paper Forest are similar to those found in late 1990s/early 2000s PC games on CD-ROM, and are thus short of spectacular. However, with the puzzles being set against the backdrop of a child’s desk, the graphics help create a real sense of nostalgia — especially for those that grew up with the first two Toy Story films and the growth of 3D animation. 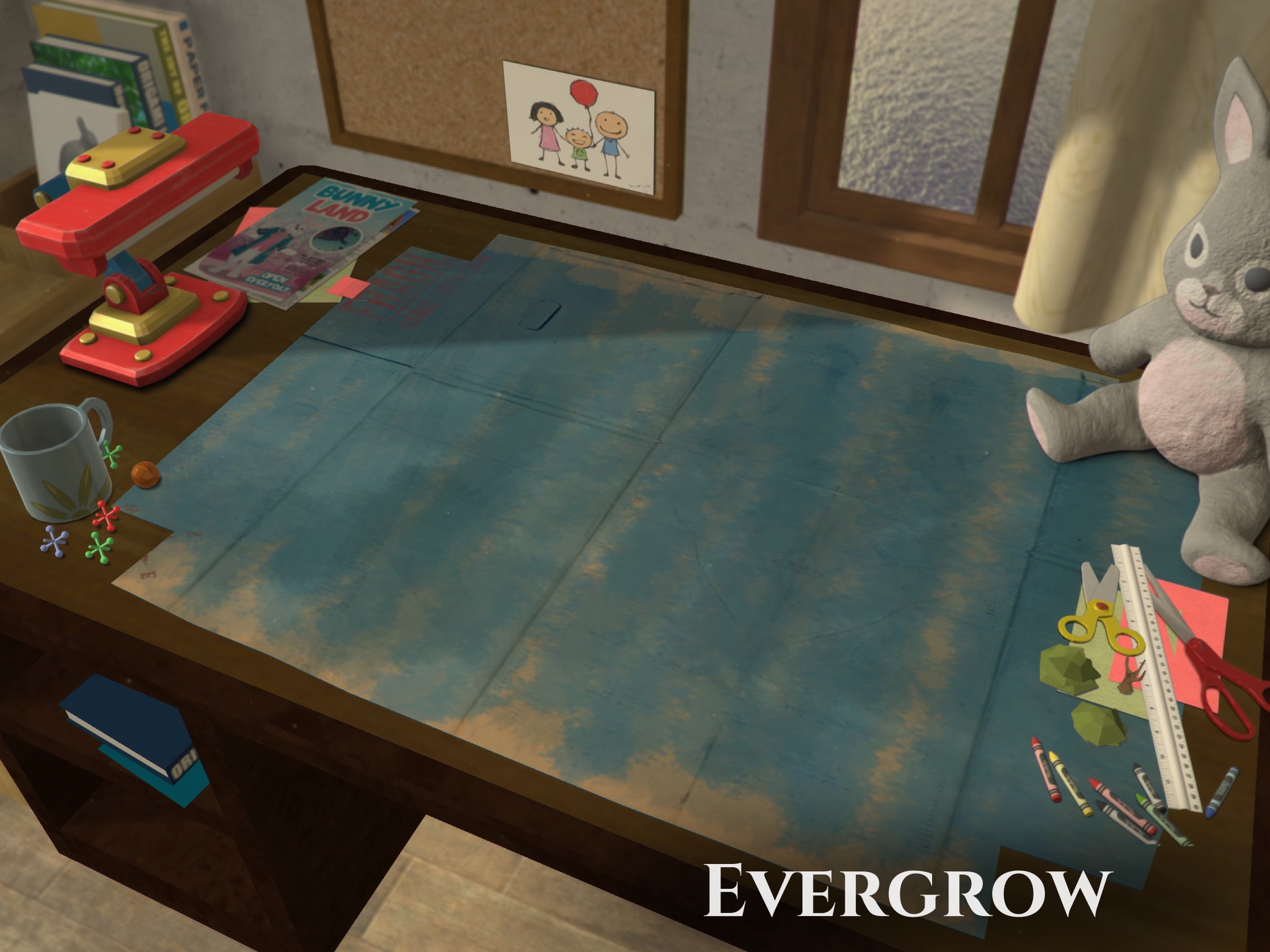 Gameplay is remarkably simple, yet incredibly challenging. Your goal is to take a small paper rabbit through the gameboard and across all the open tiles in order to make a beautiful paper forest grow upon completion. As the rabbit crosses each tile, it brings grass and paper saplings to that tile. This allows you to distinguish between charted and uncharted terrain. 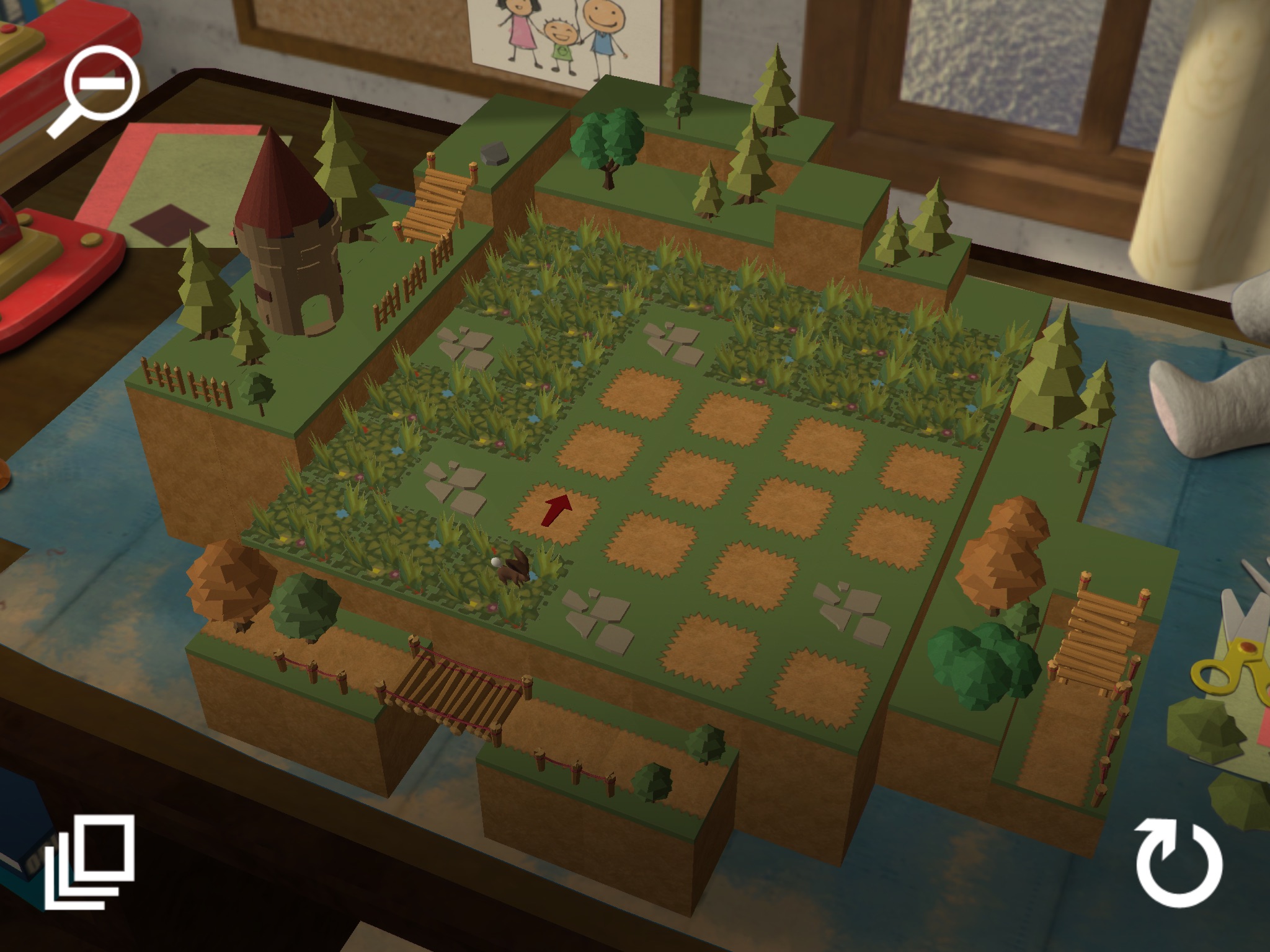 Movement is governed by Newton’s first law. A rabbit in motion stays in motion until it’s acted upon by an unbalanced force. Or it falls into a hole. There’s plenty of holes in this game. Thus, with every move the rabbit will make its way across the board until reaching an edge, a barrier, or a completed tile. The challenge lies in finding the right path for the rabbit to take so that it is able to touch on all of the game board tiles.

The setting of the game implies that the game can be played by (if it isn’t actually intended for) children, though getting through each puzzle isn’t child’s play. In completing each puzzle, your spatial imagination and reasoning will be pushed to the limit. Children are likely to enjoy the imaginativeness of Evergrow: Paper Forest without thinking much of the skill-building element. Those who are older, on the other hand, will appreciate the way the game puts into action ways of thinking and looking that are often underused in day-to-day life.

Currently, Evergrow: Paper Forest offers 50 unique puzzles across five chapters. Each chapter has its own aesthetic. This may not seem like a lot, but it’s a solid afternoon worth of play. Setting aside a solid chunk of time to devote to completing, or at least making serious headway, with the game is a good idea because once you hit a tricky puzzle it can be very difficult to give up, even temporarily.