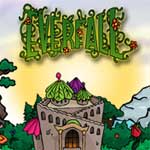 In the kingdom of the forest all the flowers have lost all their petals.  It’s up to you, the forest’s one true hero, to use your magic wand and re-petal all of the flowers in the kingdom.  And how will you tackle such a treacherous task?  Through match-3 puzzle gameplay, of course!  But it’s not just any match-3 gameplay.  Everfall offers a fresh take on the well-loved genre.

Everfall offers up classic match-3 gameplay with a twist.  Rather than simply matching rows of three petals and watching them disappear, you’ll need to make specific matches that are being demanded by the flowers below.  Once matched, these flowers get their petals and new flowers take their place, complete with their own set of demands.  Adding a further twist to the gameplay, you can’t simply swap any two petals that are side by side.  Your cursor will change after each swap allowing you to only swap petals in the direction indicated.  One turn may require horizontal movement, the next vertical, and the next diagonal.

The demands of the flowers aren’t always in keeping with match-3 tradition either.  Sometimes the flowers will only want two matching petals.  Other times they may want their petals to match vertically or diagonally.  Other twists, like battles that cloud up parts of the playing field, keep the gameplay fresh and fun throughout.  And while each level has a timer, the only way to really lose is to take too long before making a match, causing a flower to wilt and die.  The differences in gameplay between this and the genre’s norm may seem drastic, but they’re easy to pick up and make for a refreshing change from all of the other Bejewled-style games on the market.

Unfortunately the fresh gameplay is hampered by a rather poor presentation.  To say Everfall looks rough would be putting it nicely.  The whole thing looks as though it was lovingly whipped together in MSPaint.  It smacks of effort, but not achievement.  And the art isn’t the only place the presentation is lacking; the story tells the tale of a dying king and his daughters, the protection of the forest, and so on.  It’s very generic and poorly put together.  Too make matters worse, when story elements pop up they almost always take longer to work through than they should.  The designers may have felt they had an epic story to tell, but in the end it just came off as a bland, somewhat annoying interruption that caused an otherwise fun game to come to a grinding halt.

If you’d rather avoid the story, Everfall offers up two endless modes that are well worth checking out.  Relaxed Mode allows you to play without worrying about how many flowers wilt and die, and the game will only end when you want it to.  Challenge mode, on the other hand, raises the difficulty progressively the longer you play.  Choosing these modes over the story mode can really let you enjoy the best Everfall has to offer while avoiding many of the missteps in terms of story and art design.

No matter how interesting the gameplay mechanic may be, a game is nothing without variety.  It’s a pity then that is is Everfall‘s weakest area.  Once you’ve gotten used to the leaf-swapping style you’ll find there’s little else offered.  Things become repetitive fairly quickly, and while the occasional quirk changes things up (like boss battles that block parts of the playfield with clouds), there’s just not enough here to really hold a players interest for long.  Changes in scenery and story exist, but they add very little to the experience.  Combine that with the relative ease of gameplay and things go from interesting to dull a little too quickly.

At its core Everfall offers up a fairly unique twist on a well-tread genre.  But outside of that twist?  The whole think reeks of amateur game design.  The story feels trite, the artwork is terrible; the whole presentation is lacking.  It’s a shame too, because the gameplay itself has some real potential.  I’d love to see another developer license the rights to this idea and really flesh it out in proper, well designed release.  Everfall offers up a fresh take on an old genre for match-3 fans, but that freshness grows stale pretty quickly.