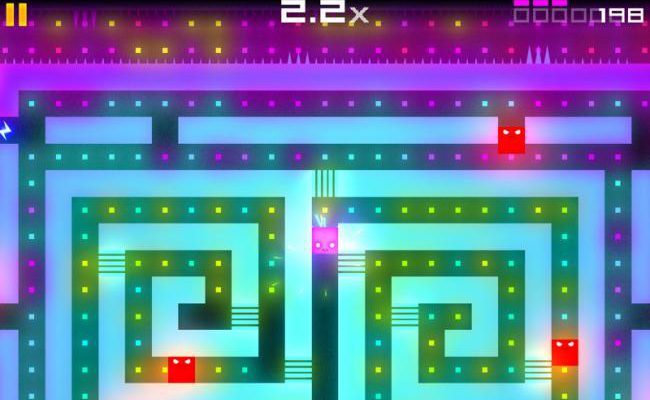 Everything old is new again, and it couldn’t look better.

It’s been said that imitation is the sincerest form of flattery. If that’s the case, then the folks behind Pac-Man should be very flattered by Evac, a modern riff on classic arcade puzzle games. At first glance, it seems like a rip-off of the classic Namco title, but it’s quickly apparent that this game is actually pretty great.

Players control “Pink Square”, who finds himself trapped in a series of neon maps that he has to escape from. Pink finds himself being chased by the forces of a nameless dark block who wants to keep all the colors tightly under his control. It’s not much of a story, but it works in this case. 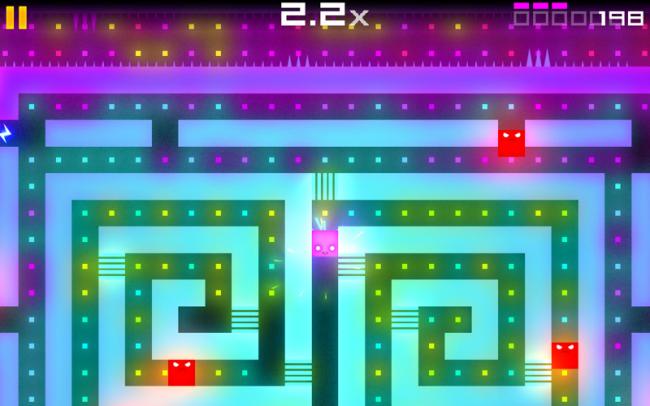 The maps are often laid out like mazes, and they’re filled with rainbow-colored dots that all have to be picked up before Pink Square can escape to the next level. This sounds simple enough, but things quickly become difficult when extra challenges like hostile blocks, unlockable doors, and alarms that can be triggered.

Once the tutorials are over, there’s a lot of stealth and strategy that needs to be applied during a play-through of Evac. If players can manage the feat, being smart and stealthy will allow them to bypass the red squares that are running amok. In fact, if this can be done, it’s a pretty rewarding feeling. Meanwhile, power-ups and yellow blocks (which can be pushed around) allow players to trap and/or destroy the enemy units. As the game progresses, difficult ramps up pretty quickly, so things stay challenging the entire time.

Now, the production values are pretty crazy here. Visually, things are really simple and angular, but it’s the colors that make things stand out; they pop off the screen and add a lot of fun to the overall look of the game. Graphically, it’s brilliant, and things looks really sharp even when the entire screen of a Mac is filled up. 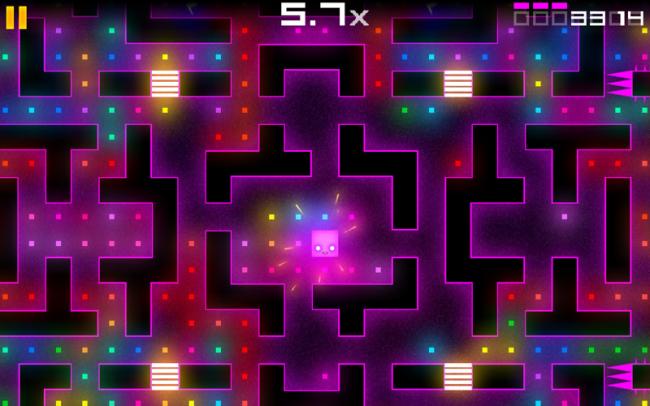 The audio, too, is nice, largely thanks to the lovely, abstract soundtrack. It’s goofy and strange to listen to, but it works perfectly in this case.

The one downside to the game is that it only has 24 levels. While the difficulty does manage to continue ramping up, it doesn’t take all that long to get through the campaign. Hopefully we’ll get some new levels released as updates in the near future.

It might be tempting to wave off Evac as nothing more than a simple Pacman clone that only features a visual facelift. But this is actually something pretty special, with deeper play mechanics than one might first expect, and some pretty stunning production values. It’s a shame that there isn’t more to see here, since it doesn’t take too long for the game to end. Hopefully the developers will give us some more content in the future, since this is one of those games that could can only get better when more is added to it.