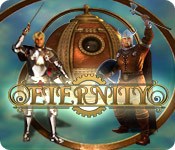 If you’re a fan of hidden object games, chances are good that you’ve come to view hints as a last resort to get you through a particularly frustrating part of the game, be it that one object you just can’t seem to find or a puzzle that you can’t quite crack. In Eternity, however, using hints is a necessity because without them, you’ll frequently find yourself dumbfounded as to what you’re supposed to do next.

The concept behind Eternity is actually pretty cool: Your grandfather has built a time machine but found himself stuck in an unknown eon, so you’re piloting the time capsule through the ages to try and track him down. Each level of the game is a different era, with historical characters as diverse as cavemen and Robin Hood asking you for help. You’ll have to visit different areas in each time zone in order to complete your quest, hopping quickly between them by selecting them from a wheel in the lower right corner of the screen. Given how much back-and-forth you’ll have to do in order to complete your mission, the ease with which you can switch between locales is very much appreciated.

You’ll have to collect a variety of items to complete an area’s goal, and in many cases completing one goal unlocks a new one. For example, the Norse king first wants you to fix his catapult, but once you’ve done that, he needs you to track down the Horn of Odin, too. Even with multiple goals, each era is fairly short, and you’ll be off to the new time zone fairly quickly, which allows for a nice variety of settings and objects to find.

The basic premise and set up of the game is just fine, but it fails when it comes to executing them. Your goals are very broad and general, such as getting a castle ready for a siege. What that involves is up to you to discover as you wander aimlessly from room to room. Sometimes your next step is fairly intuitive – if you’ve figured out that you need to light a fire, you don’t have to be a genius to know you need some wood and a match – but oftentimes you’ll have no clue. The game wants you to run your cursor around the screen until it highlights an object that you can pick up, but not only are such pixel hunts fairly tedious, it also doesn’t work that well unless you move slowly and hit the exact right point. It’s too easy to run your cursor over something and miss that it’s something you can pick up.

There are proper hidden object sequences in Eternity as well, though too few of them and with too few items to find. It’s a shame, because they’re easily the most enjoyable part of the game. There are a handful of puzzles, too, but for the most part they’re frustrating exercises in trial and error, such as one where you have to hit stone switches in just the right order, but aren’t given any clues as to what that might be.

Most of the answers will be spelled out for you by clicking the hints, however. Frustrating puzzles can be skipped, solutions to environmental obstacles can be revealed. But having to constantly ask to be pointed in the right direction saps most of the fun out of the game. What’s the point of playing if you constantly have to be told what to do? One thing Eternity does that’s helpful is putting a check mark on an area’s icon once you’ve done everything there that you need to do, which saves you a lot of pointless poring over the screen. If you still need access to an area but simply can’t do anything at the moment, that time zone’s character will tell you so. Eternity will happily give you all the information you need to progress in the game, it would just be more fun if it was easier to figure it out on your own, as opposed to having to ask for it.

Little Noir Stories: The Case of the Missing Girl Review