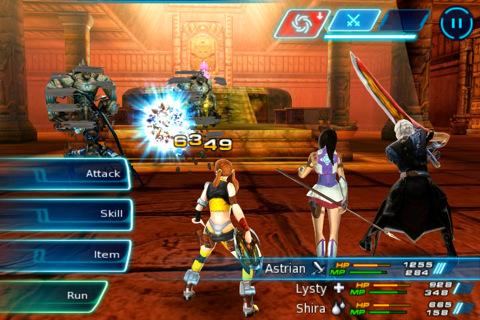 Eternal Legacy feels a lot like Final Fantasy, and we mean that as a compliment

From the moment Eternal Legacy begins, it’s pretty obvious that Gameloft is doing its damnedest to put its own spin on Square Enix’s Final Fantasy games. Not when the gameplay starts, but when the title screen loads: there are two characters that look like they were pulled straight from Final Fantasy X, right down to the choppy hair, cyberpunk sword, and summoning staff that the duo are sporting. This may sound like a bad thing, but it’s actually meant as a big compliment, because the game mostly manages to create a great JRPG on the iPhone.

Players take on the role of Astrian, the hero so pretty and well-dressed that he should be modeling for magazines. However, since he’s the game’s main character, he’s got a bunch of issues that he has to overcome before he can settle down and become a teen heartthrob, like successfully lead a rebellion against a tyrannical government and track down his missing father. It’s not a bad story, but it’s pretty unremarkable to anyone that’s played this sort of game before.

First things first: this is a very pretty game. Featuring graphics that wouldn’t look out of place on a PS2 console and a camera that easily rotates 360 degrees, Eternal Legacy is one of the best-looking games on the iPhone. Seriously, the visuals are absolutely stunning, and there’s a lot of variety with both character and environment design.

The game’s visuals are definitely welcome, because there’s a heavy emphasis on exploring the game world. As a result, it’s tough to get bored as one explores the game’s nooks and crannies for all sorts of extra treasure and side quests.

Exploring the world is easy to do, too, thanks to the controls implemented by Gameloft. In fact, everything about the game’s control system is great. The virtual joystick allows players to move without a problem, while the touch screen menus make task/inventory management incredibly easy to do. This is easily one of the best interfaces to ever appear in a RPG on the iPhone.

When it comes to navigation, players control only one character at a time; other characters are automatically handled by the game itself but can be assigned roles on how they’re supposed to help out during battle sequences (attack, heal, cast magic, etc.). The system actually works a little too well at times, as players only have to focus on Astrian in most battles and trust that the other characters will handle themselves. 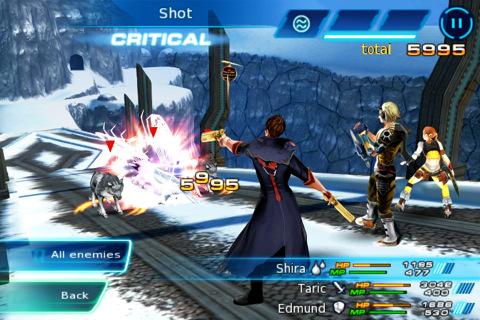 That said, the battles never really feel old. There’s an ever-changing roster of party characters that will play surprisingly differently. Even the combat is different from the standard turn-based system that many JRPGs have used so often. Battle commands are lined up, three at a time, in an action queue. A meter fills beneath the queue and the next command is enacted when the progress bar is completed. While it’s not completely ground-breaking, this combat system is different enough to keep players from growing bored.

However, other aspects of the game are a bit uneven. Players have to find “fragments” in order to learn new spells to cast and new creatures to summon. That said, there isn’t much of a difference between the power of a special/magic attack than a regular one, which means that it’s tempting to just repeatedly use basic attacks all the time. While the story is decent, the voice acting is pretty underwhelming even at the best of times.

Eternal Legacy is a big, beautiful, well-made JRPG that will keep gamers busy for well over a dozen hours. On the flipside, though, the story is only decent-at-best and the voice acting leaves a lot to be desired. That said, this is still a game that’s worth checking out for anyone who’s an RPG fan. There’s little else like it on the iPhone.

A Moon For The Sky Review