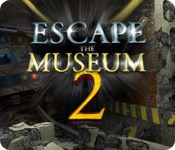 When I first sat down to play Gogii Games’ Escape the Museum 2 I was expecting to have to, well, escape a museum. Again. And I wasn’t terribly thrilled about it. I mean, how many games can you make about escaping an earthquake-ravaged museum before the premise starts to feel contrived and repetitive? I think the answer is probably "one." Imagine my delight upon discovering that the follow-up to Escape the Museum isn’t about getting out of a museum at all, but rather about a father heroically making his way through disaster-torn streets in the aftermath of the quake towards the museum to save his trapped family – in other words, a totally different spin on the same theme!

The father in question is David Anderson, wife of Susan and father of Caitlin, the mother and daughter from the first game. That’s right – this is the same earthquake and the same museum as the first game, except that the story is now being told from David’s point of view. David is at home watching sports on TV when the earthquake hits. When he can’t get a hold of Susan, he decides he has no choice but to go to the museum and save his family himself, which isn’t going to be easy since the streets and buildings have been heavily damaged in the quake.

Escape the Museum 2 is a hidden object adventure with similar gameplay to the first title in the series. As you follow David’s progress via a map, he slowly makes his way through the broken streets, navigating huge potholes, downed electrical wires, fires, and other hazards, and making the occasinoal detour indoors when his route gets totally blocked. (Not to mention saving the odd person or lost puppy dog along the way.)

Each level is a scene that presents David with some sort of obstacle that he overcome – typically by figuring out how to pass through a locked or blocked exit by finding items in the scene that can be used to solve situational puzzles. Some parts of the scene can be zoomed in on, yielding traditional hidden object scenes where you have to find a list of items from a list, like a tennis racket, anchor, clippers and hose, before you can take the useful items that you actually need.

While the formula becomes a tad repetitive over the game’s 30 levels, it’s endlessly entertaining to watch David shimmy across rooftops like Batman or come up with MacGyver-like solutions to the situations he finds himself in. Complicating matters is the fact that David has a heart condition, meaning if his blood pressure rises too high it’s not good news. What causes his blood pressure to rise? Clicking on too many incorrect objects. If you do, the screen starts to go red and David will eventually become dizzy, meaning you lose control of the mouse cursor for a few seconds.

If you get stuck, you can click on the friendly hobo who has decided to follow you around and who seems to know everything about the city, and who reveals the location of an item by chucking a bottle at it. The game is untimed, but at the end of each level you can see how much time you took to complete it, which is an interesting way of keeping the game stress-free for people who don’t like to have a clock ticking down as they play, but still rewarding people who use less time.

On the downside, if you have to quit the game in the middle of a level, it starts you back at the beginning of the level the next time around. The levels are all quite short so it’s not a huge inconvenience, but it still might have been nice not to lose any progress whatsoever. Also, you can basically ask the hobo to tell you exactly what to do in each scene, which takes some of the fun out of figuring things out for yourself. Of course, if you have enough willpower not to ask for the hobo’s help, you’ll still find the game suitably challenging.

Regardless of minor quibbles, Escape the Museum 2 is a fun and entertaining hidden object adventure, with attractive hand-drawn scenes, good pacing, and a pleasing story arc that actually has a satisfying ending (as opposed to one of those darn cliff-hangers). The game clocks in at perhaps five hours or so, so length is about average for a game of this type. Hidden object adventure fans can download this one with confidence.