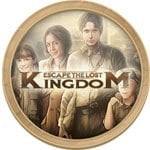 Escape the Lost Kingdom is a good hidden object adventure, with or without the 3D glasses.

Escape the Lost Kingdom, the new hidden object adventure from Gogii, is a game with a twist: It’s the first-ever casual game to include 3D game levels and animations. But there’s a lot more to it than just an extra dimension, as a well-rounded blend of hidden object scenes and entertaining minigames come together to make a game that would be very good even without the need for groovy cardboard glasses.

Escape the Lost Kingdom follows the adventures of a young family who, during a pre-opening tour of a new museum in Egypt, stumbles upon the tomb of a forgotten, cursed Pharaoh. Thanks to the antics of a stowaway house cat, they find themselves trapped within its halls, then separated and forced to untangle ancient riddles and puzzles in order to reunite and find their way out of the crumbling ruins.

The focus of the game is on the children, young brother Francis and sister Emily, each of whom possesses a magic item that gives them the power to see into the past and detect the secrets of the ancient Pharaohs. The parents, on the other hand, are little more than glorified pack mules. Henry, the father, carries three tools which allows him to break things in three different ways, while Laura, AKA mom, holds the occasionally useful game journal.

I was a little dubious about the family dynamic at first. The dialog and voice acting felt scripted and awkward, particularly the squabbling between the kids, and I expected that my hidden object search would quickly become a search for the mute button instead. But the family banter doesn’t last much beyond the early stages of the game, as a well-timed twist in the plot puts brother, sister and parents in different parts of the crypt, allowing the player to experience things from three unique, overlapping perspectives.

Escape the Lost Museum very much lives up to its billing as a “hidden object adventure.” There are a decent number of hidden object searches but fewer than you’d find in a “pure” HOG; instead, they’re merely one aspect of a more adventure-oriented whole in which interactive objects and puzzles play an equal part. Furthermore, the nature of the game means it’s not necessary, and in some cases not even possible, to finish all the puzzles in a particular area before moving on, so a certain amount of backtracking is inevitable. Completed areas of the tomb remain accessible throughout the game, though, so tricky bits can always be picked up later.

Simplifying those return trips is a detailed map which keeps track of the player’s progress, and plenty of other help is provided to keep the action moving forward: The hidden object scenes include the usual hint system, drop-down “help tabs” are available in each room to provide information about the current task and Mom’s journal is also a valuable source of information. If all else fails, game puzzles can be skipped entirely.

Visually, Escape the Lost Kingdom is decent but nothing to write home about, while the music is serviceable and the puzzles are good but hardly groundbreaking. At first glance, it all seems quite conventional. But a second glance, this time with the aid of those funky red-and-blue cardboard shades, reveals something we haven’t seen before in a hidden object adventure: The third dimension.

The 3D effects in Escape the Lost Kingdom are surprisingly good. They’re seen first in the game’s opening, which details the story of the Pharaoh Raned and his wicked brother Odion, and then appear throughout the game in various cut scenes and levels. It’s obviously not the second coming of Avatar but the sensation of depth is far better than I expected it to be.

It’s not always a boon to gameplay, however. It’s fun to see the hidden object scenes popping out of the screen but the weird, washed-out colors inherent in old-time 3D rendering make it much harder to pick out certain items. Fortunately, it’s an issue that’s easily avoided: Players are warned before each 3D sequence begins, giving them a chance to either don their stylish eye-wear or opt to go the two-dimensional route instead. For those who want to play in 3D (because that’s really kind of the point), the levels aren’t timed, so working slowly isn’t a problem.

Escape the Lost Kingdom comes in two flavors: A regular release and a special Collector’s Edition, which includes an integrated strategy guide, an extra chapter with more mini-games and hidden object searches and an alternate ending that sets up – you guessed it – a sequel. As a unique added bonus, Gogii Games is mailing free 3D glasses to anyone who buys the Collector’s Edition, anywhere in the world.

It’s a nice touch, but in the end the game succeeds not because of dazzling effects but because it’s a lot of fun to play. It’s challenging but never outright difficult, and there’s enough variety to keep things fresh from start to finish. Gogii Games has done a nice job of blending the individual components into a sharp, entertaining overall package that has a lot to offer hidden object fans and adventure gamers alike; the 3D element may not revolutionize the casual game genre, but Escape the Lost Kingdom is good enough that it doesn’t have to.