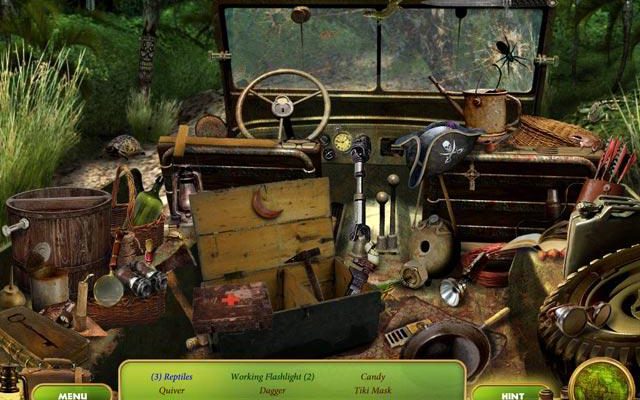 The active volcano is the least of your troubles in this game.

Rita, the heroine of hidden object game Escape from Thunder Island, is in a bit of a pickle. She wants to find her dad, who’s gone missing while looking for the Lost City of Zenadoo, but the volcano looming over his last known location is ready to blow and a good sneeze is likely to set its ash to spewing. She’ll have to trek through the jungle, comb through temples, and solve ancient puzzles to save her pop, but fortunately she has luck – and a monkey – on her side.

Escape from Thunder Island has a great premise, casting Rita’s adventures as episodes of an old-time serial, with each segment ending in a thrilling cliffhanger. It’s a great idea, but the character of Rita herself takes some getting used to. She’s kind of charming, but she’s also a little bit clueless, attributing her narrow escapes to her uncanny good luck, when in truth her survival is usually due to the intervention of her monkey pal, Marbles. She’s capable enough when it comes to navigating the island ruins in search of clues to her father’s whereabouts, though. 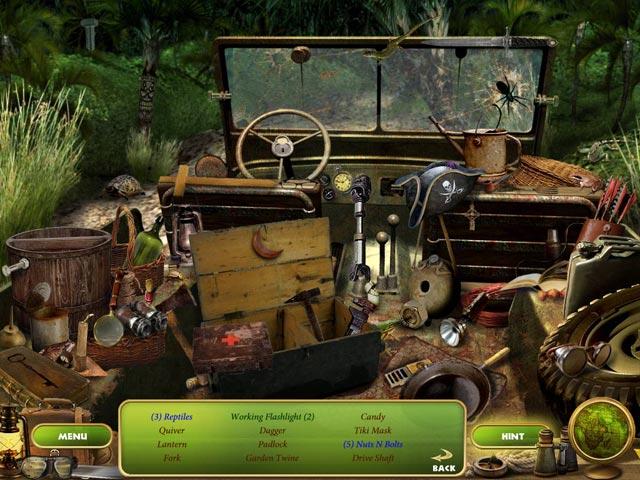 As with most current HOGs, Escape from Thunder Island is a mix of object searches and puzzle solving, but the emphasis is more heavily on the latter than the former. You’ll have to poke through a few hidden object levels in order to retrieve a useful tool or item, but most of your time will be spent simply picking up loose odds and ends that are lying around in plain view. Your inventory will quickly fill to bursting with all manner of odds and ends, including several that will be used repeatedly throughout the game, such as a machete and a slingshot.

Even if you went in looking for a HOG, you probably won’t mind too much that Escape from Thunder Island goes a little easy on them, because the ones that are there are pretty run of the mill. They’re not badly done, but HOGs have progressed past the point where padding the experience by asking players to find multiples of the same object feels lazy. One nice feature the object searches sport is the need to “assemble” one select item before you can collect it. Before you can snag the flashlight, for example, you’ll have to first pop in the battery and the light bulb. It’s not a new concept, but the fact that the pieces that need to be assembled aren’t listed adds a nice touch of extra challenge that these levels otherwise lack.

The puzzles fare somewhat better. You’ll have to tackle both environmental puzzles – like figuring out how to weigh down a lever – and more traditional puzzles like jigsaws. Normally, I’m not a fan of jigsaws in HOGs because they’re too easy and unimaginative, but the ones in Escape from Thunder Island are genuinely difficult. Their images have been worn away by countless years of exposure to the elements, making it tricky to determine what you’re trying to assemble. They’re not hard enough to frustrate, just ornery enough to give you pause. 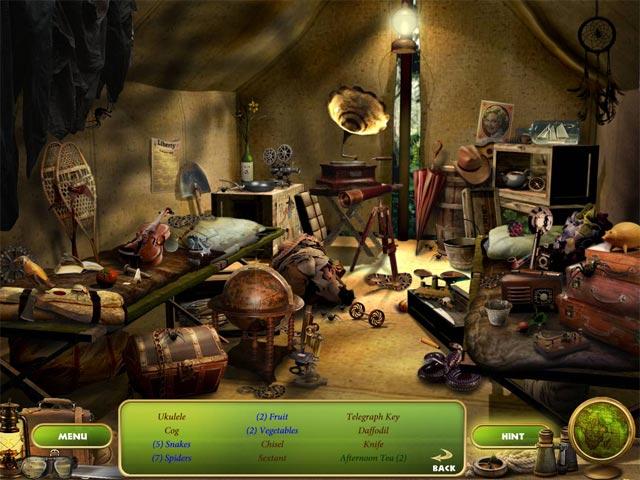 The game’s biggest issue is its lack of refinement. Upon entering a new location, simply pick up everything that isn’t nailed down – you’ll need it eventually. Puzzle pieces, tools, random bric-a-brac all goes into your ever-expanding inventory until you need it to complete an obstacle. Your inventory can become so bloated, in fact, that cycling through to get to the things you need quickly becomes a bit of a chore; it would’ve been great if items that got used the most, like your shovel, had their own tab.

The game can also be quite fussy about recognizing your mouse clicks. It’s frustrating, but somewhat more acceptable, when you have to be super precise when grabbing something from the scenery, but it should be impossible to miss grabbing an inventory item. Should be, but isn’t. You’ll frequently click on your inventory only to realize that you’ve failed to pick up the item in question. These misses, both in the field and in your toolbar, happened so often I actually check to make sure my mouse was working properly. (It was.)

I honestly can’t tell if the art style of the game’s cutscenes, which look as though they were drawn by a talented amateur in MS Paint, was on purpose or not. They’re so cheesy and low rent, it’s hard to believe they weren’t done with tongue firmly in cheek, especially given the high quality of the voice acting that goes with them.

Escape from Thunder Island has a fun, Saturday afternoon serial story and some solid puzzles that will give your brain a satisfying workout. For the most part, though, its numerous frustrations bring it down to being simply adequate.