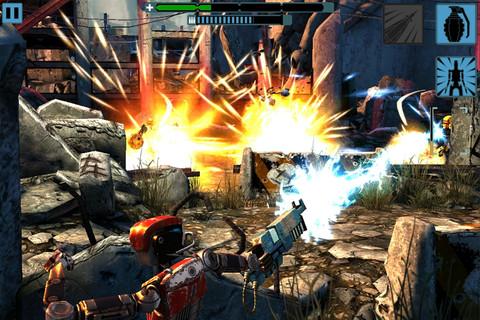 When you break down what EPOCH is and how it plays, it sort of flies in the face of me telling you that it’s a really good game. Even now, sitting here thinking of how to explain the game makes it sound mediocre at best and a bore at worst. This is a new one for me, so I guess I have my work cut out for me in trying to convey just how worth playing this game is.

It always impresses me to see the “Developed with Unreal Engine” screen when I boot up a game on my iPhone or iPad. That engine just has such a pedigree and really let’s you know how powerful the iOS devices are and how far they’ve come. Infinity Blade blew us away with how good it looked when it first launched, and while EPOCH isn’t nearly that much of a marvel to look at, the power of the engine is unmistakable.

Really, EPOCH is just a spruced up shooting gallery game, kinda like you’d see at an old carnival or, well… something out of the old Coleco game Carnival. You’ll stand in the foreground, and enemies will pop up in the background and you tap them to shoot them. They die off and more take their place. Luckily the “sprucing” part really makes this game fire on all cylinders.

Each stage has you taking cover behind obstacles. You’ll have three places to take cover in; left, center and right. You’ll swipe in the direction you want to take cover, and the enemies that pop into the background will automatically fire on you. When you move, it takes them a moment to track you, giving you time to take them out. Killing an enemy is as simple as tapping on them, though you will have to shoot them a bunch.

Once you tap on an enemy you’ll auto fire at him until he’s dead, freeing you up to track where you’re moving to. This is a great asset to the game and keeps you from having to constantly tap on enemies to shoot them. In addition to diving around, you can also crouch down by swiping, and that pulls you mostly out of harm’s way. This gives you a chance to reload and pick your spots for shots.

The thing that really makes EPOCH hectic is that different enemies have different attacks. Some just shoot, but others show up and toss grenades that need to be avoided, or sweep the landscape with lasers that need to be jumped over. Some track faster than others, making it highly strategic when and where you need to move.

So you’ll duck and dive back and forth, avoiding enemy fire and returning with some of your own. After killing a set number of guys you’ll move forward some and take up a new position with three cover spots and do it again. The game offers ten levels, with multiple rounds in each.

EPOCH is a lot more fun than it should be, but it’s far from perfect. While technically impressive, the graphics to me were just too busy. Burnt metal and bombed out city all over the place sometimes made it hard to pick out baddies. And while there’s a deep upgrade system (similar to Infinity Blade) the menus are super confusing and they never explain any of it. 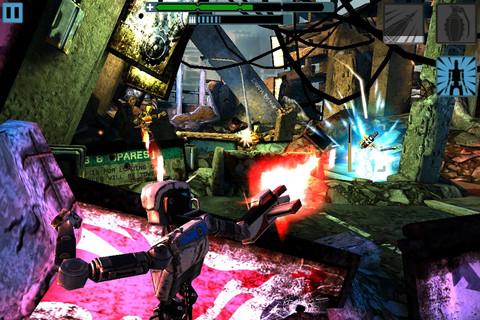 And the storyline is totally forgettable. You’re a robot tasked with protecting some woman, but naturally she’s on the other side of the city when you wake up from “whatever.” Naturally your only option is to battle your way to her, so, that’s what you do. It’s a threadbare plot, but since it has no effect on the gameplay, it at least gives you a purpose for the game to happen. In that respect, the plot does its job.

EPOCH isn’t a game changer in the way that Infinity Blade was (the comparison is perhaps a bit unfair, but they seem like spiritual brothers in a sense). It is, however, more than the sum of its parts, and much more entertaining than you might expect a shooting gallery game to be.