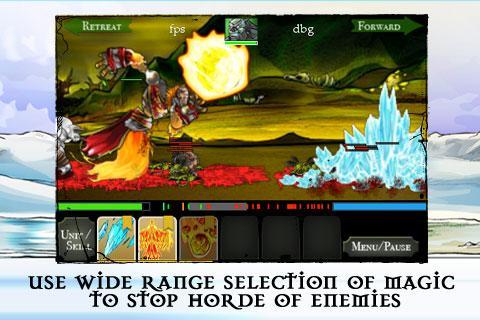 We fail to see what exactly is “epic” about this game

Until a few days ago, I had never heard of the Epic War series. That’s more a knock on me than the game series since I just don’t really play browser games very often. Epic War 3 seems to have its fair share of fans out there though, so for those people the news of a port to the iPhone is surely a welcome one. For the rest of us? Maybe not so much…

Epic War 3 is simply not a very good game. It’s the sort of game where I don’t mind making a declarative statement like the one that started off this paragraph. I feel like at its core somewhere there’s something that could be a good game, but it’s covered up and marred by middling gameplay.

Let’s start at the top shall we? Epic War 3 is advertised as a strategy game, but you’re pretty limited on the choices you can take, really only selecting the units you’ll take into each particular battle. Naturally there’s some strategy there, but not enough to really hang your hat on. You’ll start your turn in an overworld that shows which army is in control of different cities. If you so desire you can attack a town that’s connected to yours, triggering the battle scenario.

Your hero marches across the battlefield while your units follow, and when they hit enemies they auto attack until they’re dead then they move on. There’s no strategy to the fighting whatsoever, you really just start it up and watch it go. What’s worse is that the units barely listen to the two commands you can give them, forward and retreat. Yup, that’s the extent of your battle commands. Even if you’re retreating, if a bad guy gets close to you your unit just turns around and starts attacking and moving forward again. I sat looking at this fight unfold for so long on my iPhone that the device actually auto-shut off from me not touching it. That’s never happened before.

The only way to surrender a losing battle – unless you like watching your castle get beat up for 5 minutes without being able to do anything about it – is to pause and select “quit game.” This doesn’t actually quit the game, it just concedes defeat and puts you back into the overworld.

Likewise, as someone that’s never played an Epic War game before I can say it would’ve been nice to have some sort of tutorial or instructions. There’s a help option that goes over the basics, but something more tangible would’ve been a welcome addition.

There are some interesting elements to the game, like unlocking and levelling up your units and them deciding which you need to take into a particular battle. You really do need the correct army if you’re going to stand a shot at winning, so that does feel like a strategic decision. It’s just all mucked up in the rest of the experience, which sadly just brings the whole thing down. Perhaps it’s much better suited to the browser than the iPhone, but there are much better strategy options in the App Store to spend your money on.