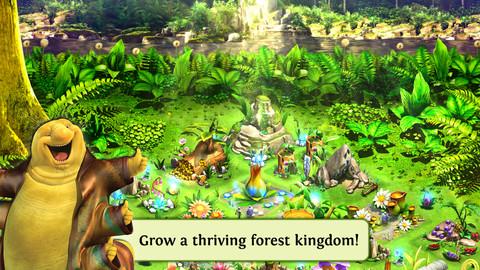 Throughout the history of kids’ cinema, there’s always been some grungy bad guy who’s constantly harshin’ on Mother Nature. The forces of pollution are at it again in Epic, an iOS game based on the recent animated movie by Blue Sky Studios. Like the film it’s based on, Epic is pretty to look at, and its world is fun to visit for a time, but you’ve been down this particular stretch of forest over, and over, and over again.

In Epic, you’re recruited to build up the Jinn Kingdom, including its resources and defenses. While you’re escorted through the game by movie characters like Nod, Mary Katherine (“MK”), and the slimy (but lovable) Grub and Mub, you don’t actually get to play as any of the heroes from the film. You’re still going to have to meet face-to-face with the movie’s bad guys, however. Epic pits you against the oily Boggans and their leader, Mandrake, who aims to destroy all life in the forest—including your happy little leaf village.

Epic plays quite a bit like Clash of Clans. Your play time is divided between tending to the Jinn Kingdom and battling the ever-advancing Boggan forces. You can’t fight a war—not even a tiny war—without resources, which makes the health of the Jinn Kingdom your first priority. Your village can produce seeds, which serve as soft currency (which, in turn, lets you build more support structures) as well as nectar, which is utilized to train leaf warriors. You can also decorate your domain to make it pretty, gather ingredients, and combine those ingredients to make items that will help you in battle.

Said battles against the Boggans are, unfortunately, a bit dull. There is a small element of strategy involved: warriors trained in wood dojos do well against enemies equipped with the wind elemental, and stone fares well against water. You can also train sword-wielders, archers, and hummingbird riders. Most of the fights against the Boggans are automatic, though you’re occasionally given the opportunity to tap on a bad guy for bonus damage. If you win—and you probably will, since few of the fights offer anything like a challenge—you reap seeds and nectar as rewards. 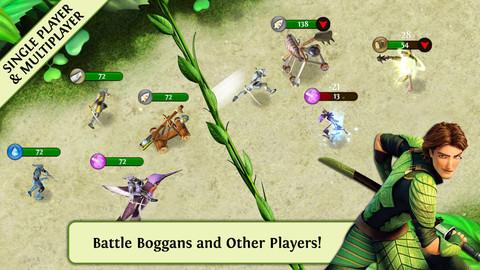 Epic‘s gameplay is nothing special if you’ve played Clash of Clans or any of its clones, but its visuals are pretty awesome. The Jinn Kingdom is crawling with life. Workers tend to their tasks, the movie’s characters move along paths, and hummingbird knights dart through the sky. The scene can get a bit busy at times, which can make it difficult to pick out a specific building without also tapping on a character, but it’s preferable to having a silent forest.

There is, however, a snag when it comes to moving buildings. Often, the game gives you the green light to put a building down on an unoccupied lot, only to move it at the last second. Epic also has connectivity issues, and will boot you from the game from time to time. Despite the game’s pretty graphics, there is a noticeable lack of polish.

Epic isn’t the worst movie/game tie-in by far, but neither is it particularly memorable. Kids will probably download it upon exiting the theatre, enjoy it for a bit, and then abandon their village to weeds and ivy.