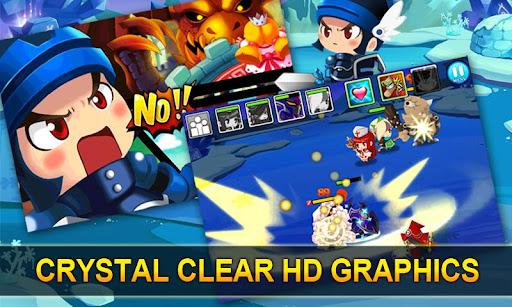 Not as epic as it looks

Epic Raiders is an RPG battle arena in which players form parties of up to four fantasy archetypes, then go head-to-head with monsters and each other on single-screen, 2D battlegrounds. It’s cute, but it’s not very engaging, and suffers from some pronounced control issues that are likely to leave players frustrated and bored in fairly short order.

Epic Raiders looks pretty good at first glance. The music is upbeat, light and catchy, the graphics are sharp and colorful and the characters – caricatures, really – are stylish and cute. Game controls are simple and intuitive, battlegrounds have a ton of variation, and the “network dungeon allows player vs. player combat. There’s a lot going on, here.

Eight different character classes are available, beginning with the stalwart Knight, a sword-swinging melee fighter, and faithful Saint, and a scarlet-haired healer dressed like a cross between an old-time nurse and the Pope. Each character has a health, attack and defense rating, and typically specializes in one particular area; the Barbarian has tremendous attack power, for instance, but his defense is quite weak. Some characters, like the Archer or the musket-wielding Hunter, rely on ranged attacks, while the Mage can cast “buffs” that increase the stats of other characters.

Controlling your characters is simply a matter of touching them or their portrait at the top of the screen, and then touching or dragging to where you want them to move or what you want them to hit. Aside from their standard attacks, characters can pick up new skills as they progress, and can also be kitted out with special “unique equipment” that makes them even more dangerous on the battlefield.

I was feeling good about Epic Raiders when I first started playing, but it didn’t take long before that optimism began to drain away. The most obvious problem with the game is the control scheme. It’s easy to handle with two characters per side but devolves into a useless mess when that number doubles and they all crush into a sword-swinging jumble. Selecting a character to control remains simple thanks to the portraits at the top of the screen, but there are no such images for your enemies. The only way to select a target is to touch it, a difficult task when they’re all milling together and overlapped on top of one another.

Compounding that frustration is the learning curve, which is viciously steep. Your mileage may vary, but I found the first half-dozen or so battles to be a breeze, after which I suddenly started having my head handed to me. Dungeon battles are punishingly difficult as well. Fortunately, earlier battle areas can be replayed endlessly, affording you the opportunity to earn levels, increase your characters’ skills and equipment and, eventually, become powerful enough to progress.

Strategy is obviously an element of the game, but it’s undercut by the fact that the best items and equipment plays such a huge role. There’s nothing inherently wrong with microtransactions in games, but encouraging players to fork over some bucks while not unfairly penalizing those who don’t is a tricky balance to strike, and I don’t think Epic Raiders quite has it.

Player vs. player battles, with the computer controlling the opposition, are free, but the game makes no effort to filter who you’re put up against. At one point, my mostly fourth level party was offered a bout against a four-man group comprised entirely of 12th level characters. A few searches later and I was given a match against two first-level opponents. It’s simple enough to decline a fight and go looking for someone more your size, but it shouldn’t even be necessary. 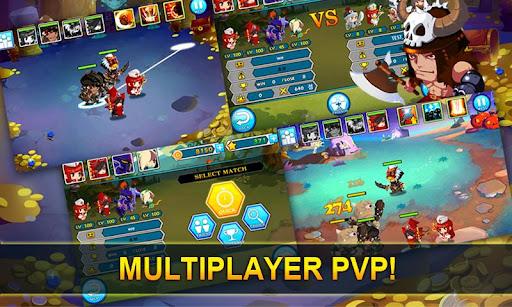 Dungeon battles, on the other hand, require “network coupons,” which means money or grinding if you want them in any kind of quantity. And while they may sound impressive, dungeons and every other kind of battle are visually identical, making all those different gameplay modes feel kind of irrelevant.

I worry a bit that my barely-there competence with Epic Raiders renders me unable to fairly judge it, but the truth is that I do like the idea of a tactical fantasy combat simulator. I just think the execution here stumbles badly. Melee battles are far too cramped to offer the necessary degree of control, the difficulty curve is too steep and sudden and in spite of the multiple play modes, there’s not a lot of variety on the table. It’s a fun idea and the presentation is great, but the actual game underneath just can’t pull it all together.